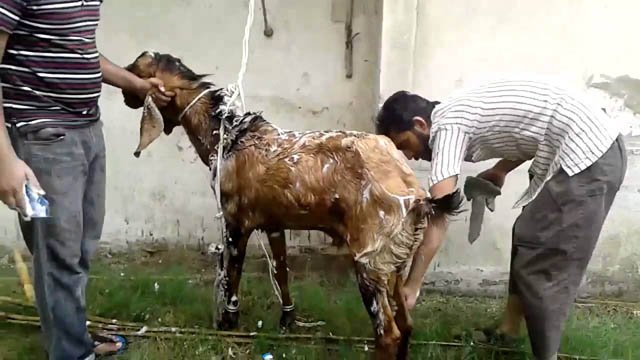 We are a nation of absurd, utterly irrational holidays.

Bakrid is the ‘festival’ when thousands of innocent / hapless animals are slaughtered. This brutal activity followed by so much of bloodshed, is celebrated at the national level with a NATIONAL HOLIDAY !!! Are we a nation of outright mad people ?? National holiday for slaughtering thousands of animals !!!

On the days of Islamic festivals, complete shutdown of the country is simply moronic. Population of Muslims is mere 12% (Officially !!!). Why should the rest i.e. 88% population of non-Muslims, be compelled to celebrate Muslim festivals ??? Do they ???

ON THE DAYS OF MUSLIM FESTIVALS, ONLY RESTRICTED HOLIDAYS SHOULD BE ALLOWED, THAT TOO, FOR MUSLIMS ALONE.

It is all the more relevant for the Christian community (growing through blatant conversions) who constitute a mere 2% (Officially !!!) of the nation’s population.

Dec. 25 should be a Restricted Holiday for Christians alone across the nation.

NATION SHALL BE IMMENSELY PLEASED IF CHRISTIANS CELEBRATE CHRISTMAS DAY AS “SECULARISM DAY” AND PLEDGE – “NO MORE CONVERSIONS WHATSOEVER, UNDER ANY CIRCUMSTANCE” !!! If a non-Christian approaches a Christian missionary for self-proselytisation, Christian missionary must preach him / her, “All faiths are same, equally good and respectable. There is nothing that may be offered by my faith exclusively which your faith cannot offer to you. Go back, follow your faith sincerely. You will receive everything that you wish to, in that.” If a Christian missionary does that, I shall rank him one of the greatest human beings in the world and a shining bright piece of humanity !! Rest assured about that.

Mahavira Jayanti, Mahashivaratri, Guru Nanaka Jayanti etc. must be declared national holidays. If minorities (i.e. Muslims) wish to work on these days, they may be gladly allowed to do so !!

Birthday of Swami Ramakrsna Paramhamsa should be celebrated as Enlightenment Day. He was the Isvara-Incarnate who unleashed forces that were instrumental for the exit of European domination of the country. Swami Vivekananda then Dr. KB Hdgewar were the real torch-bearers of Bharata’s resurgence and renaissance.

GANDHI JAYANTI should be scrapped altogether. Why should there be so many holidays on birth / death anniversaries of public personalities, so many of them no way great at all ??

In 2014, Bharata and Colombia were identified as countries with highest number of holidays with man-days losses running into a humongous amount of money. State Governments have a greater share of blame and responsibilities as they succumb to local sentiments instead of expounding the alternate view courageously.

A developing nation like Bharata cannot afford such a large number of holidays, almost half of the year. These holidays are mainly proceeds of our slavish mind-set inherited as colonial legacy consistently driving down the nation to the bottom of every list of nations that UN release every year on various parameters of growth and development.

HINDU-VEDIC SYSTEM OF CALENDER MUST BE ENFORCED. Caucasian calender must be abolished immediately. Secular-Jewels imposed Caucasian calender over the country which is a symbol of slavery and mental-intellectual bankruptcy. We have lost our treasures of glory and we must reclaim all that earliest possible.

A lot more is to be done for the nation to come alive with full glory and splendour in days to come.