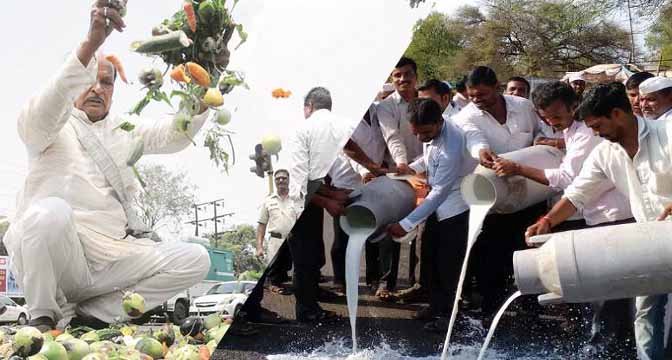 Individual and Group behaviour to a great extent is an out come of Systems and Procedures in vogue.

70 years of system and procedures have instilled in us such an indifferent Attitude amongst us that we do not care for the Nation and want every thing for FREE.

The disgruntled Ex servicemen spent months on Dharna at Jantarmantar because few of their demands on OROP were not met, the Jats then burnt vehicles to get reservation and now its the turn of Farmers. Some veterans may feel that this comparison is unwarranted but I dare say that after their reasonable demands almost 95% were met by the Govt, it was sheer greed that kept them at JantarMantar for months.

In these 70 years of independence the Political parties have got into a habit of promising Free beez to the Voter.

And the problem now is IF A POLITICLA PARTY DOES NOT ANNOUNCE TO GIVE FREEBIEZ THE VOTERS DO NOT VOTE . Had the BJP not announced a loan waiver for UP Farmers probably, they might not have won the elections because all the other parties also had a huge list of FREEBIES.

SO as a matter of fact in these 70 long years you nurtured a behaviour where people expect ; HUMEN KYA MILEGA. As if Good governance means nothing to them and the Elections are a Bargaining process.

So you had political parties providing rice for Re1/kg, free laptops, loan waivers, free bicycles etc etc. In this game of freebiez there is no place for Good governance and fiscal prudence. Many of the Indian states are in a fiscal mess and when the Central Govt is doing its bit to control the fiscal deficit, the States are in no such need.

As a result in last one decade almost 3 lacs farmers have committed suicide, millions of cases lying pending in courts, women and the weaker section is being tormented, education and skills are in a deplorable situation. But the states have no time and will and money to reform all this.

But ironically the affluent are having a ball. Be it rich farmers, Be it rich mediamen, rich businessmen, be it Bureaucrats, Rich doctors, CAs, rich lawyers, all are having a Ball of a time. They are growing stronger and stronger.

These affluent people are able to manipulate the system to their advantage for eg this tag of GARIB KISAN makes even Mahendra Singh Tikkait owner of land worth crores look Garib. The rich farmers are always at the forefront of any agitation and are the biggest beneficiaries of all the subsidies, tax benefits, compensations, loan waivers etc. It is they who have the political clout.

Now that BJP top brass after waiving of the loans of UP Farmers have though continued with the traditions and customs set before but after all its a continuation of precedence and so they have to face its consequences in other states.