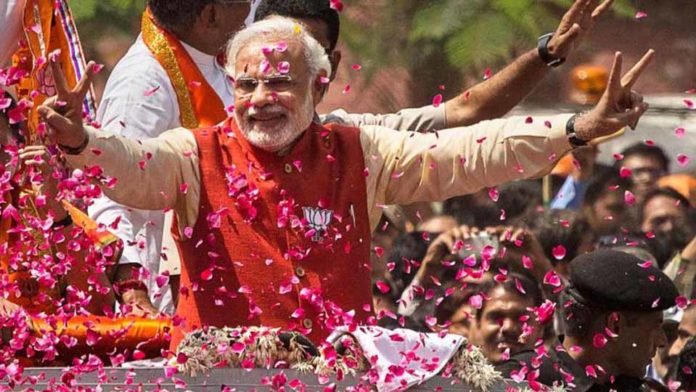 He silently withstood entire campaign of vilification, enormous in dimensions, for full 12 years like a gigantic rock on a seashore. He is the ONLY politician in post-Independence Bharata  who has undergone serial tests by blazing fire and came out brighter than ever before, every time.

He championed all round development of Gujarat on all fronts, again silently and selflessly with no unreasonable demands / expectations from the Party. Only when political opponents embarked on raking up flimsy issues about him, he started telling Tales of Development Model of Gujarat. Then he was countered with the epithet “Feku” by the enemies of Developed Bharata  !! So unfair on their part.

Gujarat 2002 was a spontaneous reaction to the dastardly act of brutal slaughter of 56 Kar-Sewaka travellers of Sabarmati Express at Godhara. It happened so suddenly with pent-up anger gushing out against Muslim-marauders on such a large scale that no Government could have controlled it swiftly. However, almost 30 year old annual ‘ritual’ of communal riots in Kalupur / Dariapur areas of Ahmedabad stopped completely. Since 2002, Gujarat has been a riot-free zone in the country.

He sent a unique, high-decibel message to the so-called minorities, loud and clear – mind your conduct vis. a vis. majority community of the nation… cannot impose a foreign, sectarian religion upon the nation and we are here, with you. He successfully transformed Gujarat, known as a state of stock-brokers / Dalal-s into a vibrant manufacturing hub with his internationally acclaimed Vibrant Gujarat Conclaves held periodically. Today Gujarat is complimented for the spectacular growth under his regime and compared with advanced economies of the world.

His elevation to Prime Ministership of the country in 2014 was truly a breath-holding historic event, riding on such a massive wave of popularity that even titanic personalities in politics were washed ashore without life-jackets! Till his advent into national politics, ‘Hindu-nationalism’ / ‘Cultural-nationalism’ were embarrassingly dirty words while duplicitous secularism perpetuated by The Dynasty was a source of pride and honour.

Narendra Modi’s politics of equality for all and appeasement for none reversed the scenario diametrically. Today, a Hindu  can proudly declare himself / herself to be a proud Hindu-nationalist under his regime. He sent out the message loud and clear, freedom of speech does not include sedition, that terrorists can never be regarded martyrs, that separatists are traitors and nothing more than that, restored honour and glory of those patriotic Congressmen who were trashed by The Dynasty inviting ludicrous allegations of having appropriated legendary national icons, bringing to light sterling contribution of tribals to freedom movement, rescuing captive nurses of Kerala from vice like clutches of ISIS, supplying massive amount of water to parched districts of Maharashtra through Jaladoot Express, International Yoga  Day…catalogue of his gratifying actions and decisions is too long indeed.

On economic front, his policy of Sabka Saath, Sabka Vikaas is so powerful that Bharata  is the fastest growing economy in the world defying all recessionary trends and downward economic indicators leaving behind even China. As all economic doctrines manufactured at Harvard / Cambridge Universities etc. have been rubbished, world is very eager to not only invest but also learn how to replicate the miracle in their countries.

Humongous legacy of black money was dealth with a decisive blow through demonetisation of high denomination notes, never attempted before on such a massive scale. All Prophets of Doom had egg on their faces and economy continued with more than 7% GDP.

Migration of nation’s economy from cash to plastic card is a monumental milestone and a serious hurdle on generation of black money. Economy of black money is no more an economic doctrine. It was an unbelievable scenario for the world, people standing in long queues before banks / ATMs to convert their demonetised notes, tired and tormented yet complimenting the Prime Minister with a smile for the historic decision to wreck nation’s black economy.

Quantum of black money recovered ran well beyond 7 lakh crores, banks were flush with investible funds with propsects of interest rates softening, heralding economic boom. Credibility of Modi baiters including Nobel Laureates in Economics was shredded into fibres as numbers do not lie at all !!

His economic measures have brought about psychological changes in the country with love for piles of cash, property, farm-houses, gold, diamonds…having been evaporated for more productive deployment of surplus wealth. Naxalites / Maoists discovered  ideology of surrender to be far better much to their chagrin, human traffickers went out of business and Daud Ibrahim was left a pauper !! Politics of development is a great virtue. It is a ‘Brahmastra’ which can decimate any opponent howsoever high and mighty he / she may be. And he has done so, so many times over.

He has established beyond controversy that honest, strict and no-nonsense politicians too can survive and flourish to deliver results of massive innovative development programmes. Not only is he blessed with a spine, he is diametrically opposite to the PM Without Spine that we had in South Block till 2014.

He has proved unequivocally, categorically and resoundingly that policy of justice / development for all with appeasement to none, is the most practical one and beneficial too, for a state. No other politician in the history of this country has been able to accomplish that on such a large scale. He further proved, Secularism is just a sham, a bogus ideology that is self-destructive and susceptible to misuse by any ill-intentioned politician.

He practised Chanakya’s philosophy of Sama, Dama, Danda  and Bheda  extremely prudently in the interest of state and nation.

After ex-US President Abraham Lincoln, after ex-PM of Singapore Lee Kuan Yew, it is Narendra Modi of Bharatvarsa who has proved again, for the third time, Democracy is successful ONLY when blended with streaks of no-nonsense authoritarianism. Unmitigated, unrestrained Democracy is a curse for any nation. However, he demarcated the LAXMANA REKHA  between democracy and authoritarianism very, very brilliantly, without inviting even a single serious allegation of being dictatorial.

He has unveiled a marvellous brand of politics in the country – COMPETITIVELY DEVELOPMENTAL POLITICS WITH INTERNATIONAL BENCHMARKS. It is so unique, so demanding that it shall be hell of a task for any other politician to match him in decades to come.

He is an anti-thesis to all age-old, prevailing shibboleths. New ones that have been coined by him are – Sow a rupee in Gujarat and reap a $: Give me 100 rupees, I shall pay you back 110: Vote For India: India First, Digital Bharata  etc. He is a formidable economic challenge to several so-called GREAT ECONOMISTS holding degrees from Oxford / Cambridge / Tripos / Rhodes Scholars… so he has proved again how superior had been our ancient wisdom in all disciplines, in all respects, to the entire world……

He is incorruptible, endowed with sterling qualities of integrity, dynamism, patriotism, drive and common-sense. Yes, Narendra Modi is a GENIUS of Common-Sense, a rare commodity in the country, particularly with politicians. These endowments have made him a formidable politician in the world.

Prime Minister Narendra Modi possesses a flair to fill up all yawning gaps bequeathed by his predecessors. If JL Nehru was seized of fissiparous tendencies, NaMo is too resolute when it comes to nation’s unity and integrity. If LB Shastri was deceptively invited to Tashkent in cahoots with Alexy Kosygin only to return dead, NaMo shocked minions like Mani Shankar Aiyer into embarrassing silence when he barged into the house of Pakistani PM at Muri, roared and came out like a Lion-King !!!

If Indira Gandhi heralded ‘Garibi Hatao’ and left it at that, NaMo dedicated his entire Government to the lofty cause of eradication of poverty. If Indira Gandhi nationalised banks to serve the common men, it was NaMo who realised that with world-famous now, JanDhan Yojana. If maximum black money was generated post 1971 with 97% rate of income-tax imposed by Indira Gandhi, it is NaMo who has earned the epaulette of DeMo NaMo, after the historic demonetisation of high-denomination currency notes and now poised to abolish income-tax itself altogether.

If Rajiv Gandhi allowed his perforated Government to be leeched and hogged by vultures like Ottavio Quattrocchi, it is during NaMo regime that every interaction with outsiders is recorded, profiled and justified. If ManMohan Singh was celebrated as an ‘under-achiever’ by the Time, it was hell of an exercise for the same Time to dodge and avoid NaMo from being declared Man Of The Year in 2014 / 2016 !! Such instances are dime a dozen all over, around us.

NARENDRA MODI IS TRULY UNIQUE AND EXTRA-ORDINARY. His Congress rival in Gujarat Ashwinbhai Kotwal had remarked dejectedly about him in 2002, “This Narendra Modi is going to deal a deadly blow to Congress. He is a man of great talent and competence.

He is going to prove to be a cyclone for the Congress.” So precise was he !! PM Modi heralded the call of ‘Congress-Mukta Bharata’ in 2014 and now in 2017, mission is about to be accomplished brilliantly. Conservatives / Rightists are generally disdained and derided by ‘Progressive Liberals with a scientific temper’. For too long British Conservatives were ridiculed as ‘The Stupid Party / The Nasty Party’ and Margaret Thatcher subjected to snide comments.

One of the most brilliant US Presidents, Ronald Reagan was persistently lampooned for his simple / ordinary beliefs. In our country too, acolytes of ‘Progressive-Socialist’ Nehru did not spare even their own partymen like ‘Dhotiwala’ LB Shastri, what to speak of AB Vajpayee or LK Advani !!

When Cambridge educated MS Aiyer derided NaMo with his ‘Chaiwalla’ remark, when Harvard educated Chidambaram questioned him about his abilities to tackle ‘Current Account Deficit’ entirely created by him, when Oxford educated Salman Khurshid demanded a glimpse of his ‘possible’ foreign policy, it was time for the great nationalist to treat those remarks with the contemptuous silence that they deserved.

Now that 67% territory of the nation is being governed by the so-called ‘Hindu  Party’, will the likes of Aiyer / Chidambaram / Khurshid condescend to re-define / re-identify ‘The Stupid Party / The Nasty Party’ just once more ???

If some cynic wishes to comment wryly that destiny has favoured Narendra Modi, I would deeply pity his / her intellect, reminding him / her simultaneously, Bharata  is a land of Sriman Narayana… spilling over with talent, full of geniuses… A VERY, VERY UNIQUE NATION WITH AN EQUALLY UNIQUE COMMUNITY – SANATANA HINDU-S !!!