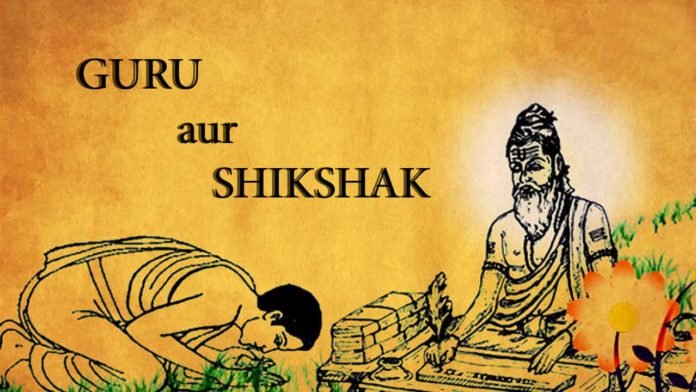 That is the real responsibility of a Guru  towards his / her disciple. From the darkness of ignorance and delusion, to the highest enlightenment and ultimate salvation i.e. Moksa, is the occupation of a Guru.

There is a confusion galore as far as definition of Guru  is concerned. There are so many saffron- / white-robed saints who are adored as Guru-s  by their disciples. I venture to clear the cobweb of confusion to the best of my intellectual faculties whatsoever, hereinasunder –

Definition of Guru  is profoundly stringent, almost absolute in nature. To be declared as a Guru, he / she must honour three undermentioned conditions –

Guru  must be capable of de-materialising, then re-materializing his / her body.

Guru  must be capable of revealing your past lives to you just by touching you with his / her finger.

Guru  must be capable of revealing infinite splendour of Absolute Consciousness i.e. Param Brahmatma  in a fraction of second.

It is true that when a seeker of truth is eligible to receive the Truth, Guru  enters into his / her life spontaneously. Disciple need not even search for the Guru. Mere longing for the Guru  is enough for him to appear.

Gu  means darkness of delusion and Ru  means the ‘dispeller’. Hence, the one who dispels your darkness of delusion, is Guru. Guru  does not merely impart knowledge or doctrines unto disciples.
He shares his entire being, wisdom, enlightenment and the highest order of Consciousness with them that he has earned by virtue of his ardent pursuits. A teacher may or may not command the same magnitude of reverence that a Guru  does. Guru  commands love, devotion and dedication too. Guru  is an entirely oriental concept so much so that even the word Guru  cannot be translated into English with absolute degree of accuracy. Guru  does not impart theological doctrines unto his disciples.

Receiving blessings / preceptions of a Guru  who is dis-incarnate, is a tremendous fortune. It is rare gift from Isvara.

Every individual has his / her Guru  already decided by Param Brahmatma. No might of universe can change that.

Guru-Mantra  is the means to ultimate emancipation. Like Guru, Guru-Mantra  is also pre-determined. Disciple is ordained to pursue the same Guru-Mantra  till Moksa  is attained transcending lives after lives, deaths after deaths.

Guru-Mantra  is decided by a Guru  on the basis of outstanding Samskara-s yet to be worked out i.e. to be dissolved through redemption. To perceive outstanding Samskara-s in a given disciple, Guru  has to be a Siddha Yogi. That amply explains why aforesaid three conditions are inescapable for a Seer to qualify to become a Guru.

Blind dedication unto one’s Guru  is a cardinal requirement to attain salvation. Justification lies in incapability of the disciple to perceive his / her outstanding Samskara-s that determine the path and Guru-Mantra. Since any discussion / argument with the Guru  on the subject shall lead to frittering away precious Adhyatmika  strength, disciples are mandated to be blindly devoted to their Guru-s. As a matter of fact, disciples are blind spiritually, have to be stewarded by their respective Guru-s towards blaze of enlightenment.

Thus, Guru  enacts a seminal role in the spiritual unfolding of his disciple. Guru  is a source of energy and inspiration though he may or may not exist in human form. Upanisad-s say, when a disciple is ready, Guru  appears before him / her. The state of being prepared to receive Guru  denotes utmost spiritual evolution which constitutes foundation within the disciple to receive Guru’s grace.

My Gurudeva  is a dis-incarnate, subtle deity. It is on His precise instructions that I decided to write this article and entire contents belong to Him alone.