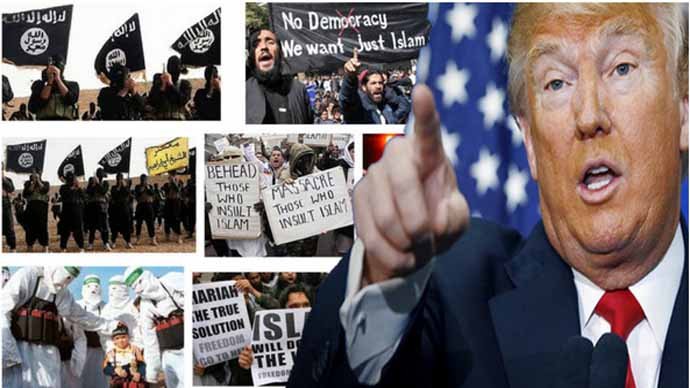 The Islamic world is going through tumultuous times and that is largely their doing. To say that all this has happened only because of USA and West committed some mistakes would amount to behaving like an ostrich.

The habit of Muslim leaders of palming off their problems to USA or West is not going to help anymore, if one goes by the US President views on this matter.

That he felt the need of taking a class of Head of Islamic countries that too in Riyadh ; Saudi Arabia which has for years been spreading ist version of hardline Islam ; Wahbism vindicates my view on this That Some one has to bell the cat.

Many world leaders would have felt the need to do some straight talk to these Muslim leaders but always felt shy of displaying Political courage.

Trump did some straight talk and In an hour long class clearly told the Muslim nations to throw the radical muslims out. He said ; A better future is only possible if your nations drive out the terrorists and extremists. Drive. Them. Out.

He emphasised in no uncertain words ; America is a sovereign nation and our first priority is always the safety and security of our citizens,” the president said. “We are not here to lecture — we are not here to tell other people how to live, what to do, who to be, or how to worship. Instead, we are here to offer partnership — based on shared interests and values — to pursue a better future for us all.”

Trump called on countries in the region to do the hard work themselves and not to expect the U.S. to fight terror for them.( LESSON FOR INDIA).

I know only an AMERICAN could have talked like this.

Although, Nawaz Shariff was listening to this lecture from the front bench but its certain he must have behaved like a back bencher, And must have shrugged off , all that Trump said, because Pakistan views these radicalised Muslim men as their strategic assets.

Why look outside, even In India we have plenty of Radicalised Muslims who draw inspiration from such elements outside. For some, pseudo seculars, the sting operations of the radicalised Young Indian muslims and Maulanas who reject Democracy and applaud Taliban might be a revelation but for many of us it was a known secret.

Therefore, to say that Indian muslims are different then Pakistani muslims may be partially correct and be accepted with a pinch of salt.

The manner in which the AIMPLB has vehemently opposed the issue of triple talaq instead of accepting it as a need of modern times and the manner in which Kashmiri muslims have been behaving once again proves that Given a long rope of Freedom the hardliners would strengthen their position and tend to misuse the freedom that is provided by the Democratic set up in the country..

The muslims need to look within and reform, The world is fast running out of patience. To shrug it off saying that these were Trump’s views would be grossly wrong because I think these are the views of every common man all over the world particularly India which has been facing the consequences of Radical islam for last almost 3 decades.