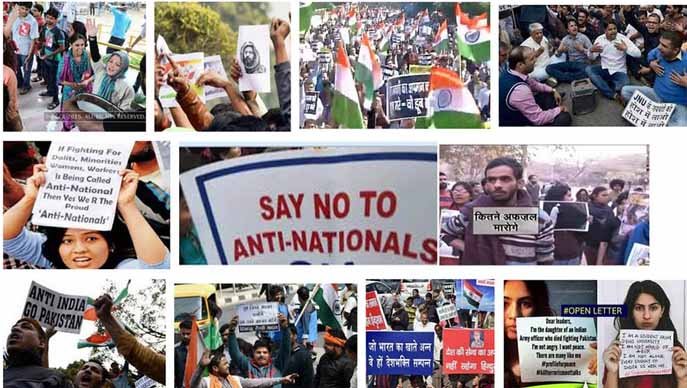 Every individual / community have their own definition of patriotism. For instance, today’s SECULAR-BRIGADE have contributed interesting dimensions of patriotism to the national polity.

When Islamic-Secularists say they are patriotic, they declare so towards “ISLAMIC REPUBLIC OF INDIA” and not the sovereign HINDU-RASTRA  of BHARATVARSA. Let that be very explicit to you all.

When BROTHER-BENEDICT SECULARISTS bare their patriotism, they mean “CHRISTIAN REPUBLIC OF INDIA” with their religious HQ at the Vatican while political, in Buckingham Palace, London or may be, The White House at Washington DC. These wonderful patriots do all their lip-service at the altar of their ISLAMIC / CHRISTIAN REPUBLICS OF INDIA ALONE, respectively.

They know very well that secularism is an ideology that is utter ‘IDIOTOLOGY’ which they wish to impose upon the nation so as to humiliate / denigrate Hindu-s of their glory and splendour that they destroyed like monsters decades / centuries ago. Several other versions of such secular idiotologies are also available on book-shelves authored by those very dear to hostile forces overseas.

Marxists / Leninists are faithless animals. Hence, they do not believe in nationalism / patriotism of any order. They are loyal only to ‘Lord’ KARL MARX whose bogus movement is responsible for killing of at least 13 Crore people across the world including 4 Crore peasants, purported to be the backbone of their own movement. That faithlessness is the despicable order of faith, is the wisdom yet to dawn upon those poor, wretched fellows.

Real, genuine patriotism is towards Hinduism  alone, it’s culture, values, wisdom, pursuits and practices, it’s ancient history, the land of Bharata-Mata… all that is collectively known as Bharatvarsa. Any other “-ISM” is nothing but treason, sedition and anti-nationalism.

I wish to open eyes of my innocent, Isvara-loving Hindu-s (includes Buddhists / Jains / Sikhs) of the country, to be very careful about genuine patriots from the herd of paid from abroad PSEUDO-PATRIOTS.

HINDU-DROHA  in any form, by design or contours, is pure / unambiguous / unadulterated RASTRA-DROHA.