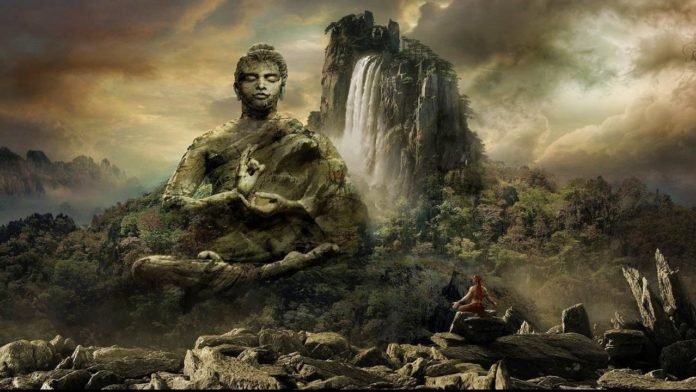 Gautama Buddha  was serene and tranquil to the extreme as the intensity amply conveyed depth of his realisation of the highest order of enlightenment.

He had attained the Ultimate Consciousness and he had nothing left before him to attain more or strive for.

As he happened to be one of the greatest and finest human beings who ever walked on Planet Earth, he once politely rejected and returned the insult that was heaped upon him by someone who felt threatened by his erudition.

He had attained the highest order of absence of Ahamkara  as he gently chided one of his disciples for having addressed him as the greatest Buddha  without knowing any other Buddha  of past and future which numbered infinite !!

Gautama Buddha  had attained highest order of inclusion as he eschewed exclusion of any nature whatsoever anywhere.

He enunciated the doctrine of Srimadbhagvadgita, every spiritual faith / belief is sacrosanct for the pursuer, being compatible with his / her nature and content of un-redeemed Karma-s therefore, must be respected by all others. He outright rejected inter-faith hostility and welcomed inter-faith hospitality instead, at every opportunity.
He had attained humility of the highest order as he believed, no human being is capable of being omniscient. Venality alone can claim, he / she knows all and all other religions are either false or imperfect, “They know not the real, they know not the unreal, they know not the truth, they know not the untruth. In such a state of ignorance do they dispute and quarrel.”

Gautama Buddha  was an ardent rationalist too. He never endorsed irrational rituals and exposed those Brahmana-s peddling venal practices and traditions to the detriment of society. In various Nikaya-s, he eloquently spoke against such exploitative practices including gifts by Buddhist-s to non Buddhist-s. He categorically declared, every non Buddhist  enjoyed the same right to liberation as Buddhist-s.

He was an excellent mediator and arbitrator too. He resolved every dispute / disagreement between religions by reconciliation and fortitude with emphasis to eschew aggression and hatred. Egoistic affinity towards one’s own faith is the vice that he abhorred, “To be attached to a certain view and to look down upon other views as inferior – this, the wise men call a fetter.” Buddhist  monks cannot afford to be dogmatic in their faith – “This is my faith.” is a statement of truth according to Gautama Buddha  but certainly not, “This alone is Truth and everything else is false.”

Gautama Buddha  was a Hindu  of the highest order as well as one of the greatest human beings ever known to humanity.

He was an Avatara  in true sense of the term and he himself had acknowledged that. Iksvaku Raja Pravarasi Sata Prabhava Vamsa Sambhava  is the Prakrita  inscription of King Virpurusardatta  of IIIrd century CE discovered in Nagarjunakonda  valley of Vijayapuri  that means, “Born in the family that produced hundreds of great royal sages such as Iksvaku.” Another evidence cum affirmation arrives from Dasaratha Jataka  wherein he declares, “At that time King Suddhodana  was King Dasaratha, Mahamaya  was the mother, Rahula’s mother was Sita, Ananda  was Bharata  and I myself was Rama-Pandita.” Gautama Buddha  was very much an ardent Hindu  who preached Sanatana Vedanta Darsana  upon attainment of enlightenment inspired by Indra  and Brahma. Indra’s trademark weapon Vajra  happens to be insignia of Tibetan Buddhism. Gautama Buddha’s expositions heavily relied on Upanisadic  wisdom as he had accepted the glory of Upanisad-s in entirety in spite of the societal turbulence being undergone by Hindu-s. However, he did not encourage ritualistic segment of Hinduism  as he regarded all that dispensable and volitional. What he had attained in the name of ultimate realisation / enlightenment was pure Dharma, meant for all and inevitable for everyone, absolutely devoid of man-made additives / contaminants of any kind whatsoever.

The Sakya Muni  was an ardent Manuvadi  too ! Being thoroughly enlightened and liberated, he unhesitatingly declared himself a Brahmana  and never castigated the doctrine of Varna  as expounded in Manusmriti. Even Dr. Radhakrishnan confirmed, Gautama Buddha  never condemned Varna / Jati, “Not by birth is one a Brahmana, not by birth is one an outcaste; by deeds is one is a Brahmana, by deeds one is an outcaste.” Almost all of his followers were highly respected Brahmana-s. So were so many of Buddhist-s later. Buddhist  convention has already prognosticated, next Buddha  shall be known as Maitreya  and he shall be a born as a Brahmana  in addition to being a Brahmana  by Varna. Faith known as Buddhism  has absolutely nothing which has not been sifted out from Sanatana Vedanta Darsana  which happens to be the most fundamental and mother of all faiths in the world ever cognised by humanity. Beauty of the mysticism lies in the fact that Avatara  of the era moulds it in such a way that the Darsana  is dedicated to address prevailing issues of concern, implicit threats and suggest best way out of the rigmarole. Subsequently and quite undesirably, approach so modified to the ongoing crisis alongwith it’s modified philosophy, were declared as a new faith / religion and all resources have been assigned to prove complete disconnect with it’s origin and roots.

Followers of Gautama Buddha  were supported, nourished and protected in ancient Bharata  by Hindu  Kings exactly as all other Hindu Sadhu-s / Sannyasi-s. It came to be known as a separate faith only when it crossed borders of Bharata  as those Bhiku-s laid emphasis on Buddhism  while ignoring it’s roots and origin emanating from Sanatana Vedanta Darsana  and Gautama Buddha  being an Avatara  of Iksvaku  clan.

It is so unfortunate that subsequent generations of Buddhist-s repudiated the truth and questioned it without any shred of evidence. That only betrays their liberal flirtation with egoism rejected by Gautama Buddha  unequivocally. Leftist view nourished by western intellectuals floated the belief that Buddhism  has always been a separately identifiable faith as a measure of revolt against tyranny of Sanatana Hinduism. As a matter of fact, Gautama Buddha  never founded any newer faith which could possibly have been declared Buddhism  at all and Hindu-s never ever persecuted Buddhist-s.

Gautama Buddha  is purported to have denounced the evil Vedic  practice of animal sacrifice. As a matter of fact, no Veda  ordains / mandates / recommends animal sacrifice at all. Evil practice of animal-sacrifice was prevalent in that era but it was wrongly and quite inappropriately linked with Veda-s while Veda-s have absolutely nothing to do with animal sacrifice. He was critical of Karmakanda  described in Veda-s which has never been mandatory for anyone. However, Karmakanda  enjoys it’s own unique importance and inevitable for those desirous of a defined / designated acquisition or possession. He mainly dwelt on Upanisadic Darsana  acceptable to as many as possible and never ever claimed having founded a new sect / faith / religion. Gautama Buddha  never denounced Vedic  wisdom as he is often mentioned as a great Vedic  reformer instead. As a true protagonist of Vedanta Darsana, Gautama Buddha  was all inclusive to the extreme as he acknowledged spiritual enlightenment as a fundamental privilege for all. He graciously included all into the monastic order conceding equal opportunity for everyone to strive for the highest order of existence.

There have been sinister efforts for quite sometime to create antagonism between Hinduism  and Buddhism  completely obscuring the fact that Buddhism  is indeed, the highest order of Hinduism  alone. In other words, Buddhism  is the pinnacle of Hinduism  and there is absolutely no trace of antagonism. “Though I was born a Hindu, I solemnly assure you that I will not die as a Hindu.” were the words of Dr. Ambedker before switching over to Buddhism  as if Buddhism  is an altogether different religion !! His idea to proselytise himself to escape from indignities being heaped upon him was hardly an epochal decision. He was a born fighter against decaying social practices, should have dealt with all that with a heavy hand instead of escaping through Buddhism. Some of the so-called western Indologists (it is better not to call them Samskritologist-s !!) like Sheldon Pollock went to the extent of declaring, what to speak of Hinduism  even Samskrita  was rejected by Gautama Buddha  in favour of Pali !! How could he deny the fact that Samskrita  always flourished even during adversities including Mughal era and the first slow-down was experienced only when the Mughal despot Aurangzeb arrived on the scene. If at all that is assumed to be true, they have no explanation as to why Buddhist  era witnessed resurgence of Samskrita  from CE II onward. Even Dr. Ambedker is purported to have opposed sponsoring Samskrita  as national language while he had indeed, actively supported Samskrita  to be accepted as national language.

Gautama Buddha  was a titanic socio-spiritual reformer who not only steered the society towards enlightenment, refinement and purification but also raised Sanatana Vedanta Darsana  to commanding heights.