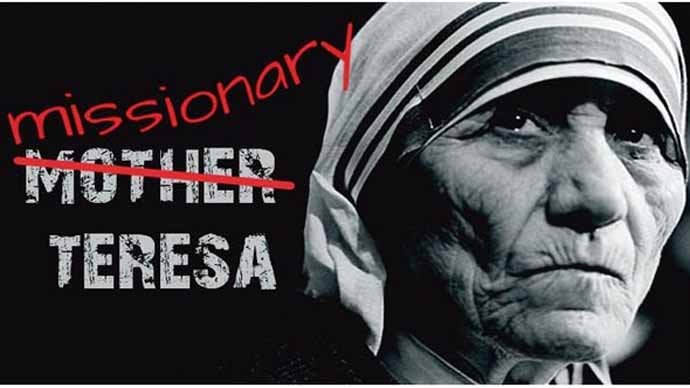 The MOTHER-MISSIONARY-SUPERIOR (?) could not find even a single destitute, mugger, beggar or drug-addict in her ‘HOLY-MOTHERLAND’ of ALBANIA !!! Her country must have been be a Jesus-Paradise then !! She found plenty of them in India whose wealth was plundered by colourless (devoid of pigmentation, whites are not white really) Caucasian plunderers / Missionaries on prowl. Why did she leave behind her paradise-country and settle down in India ??

Nobel Peace Prize was an additional grant to her by western Benedict-Masters to carry out more conversions in the country in the guise of social service. Also to humiliate the nation before the world. And Bharata-Ratna  was awarded by Indian poodles of British-Masters who had forced upon the nation – TRANSFER OF POWER AGREEMENT, 1947 to perpetuate British rule by proxy.

Her sole objective was evangelism in the name of bogus charity. She was instrumental in convincing the world, collective charitable / philanthropic work of all Indian agencies just did not match her Missionaries of Charity, diametrically opposite to the reality !! Sterling social work of VHP, RSS, Arya Samaja, RK Mission, Swami Dayananda Saraswati, Swami Vivekananda, Swami Cinmayananda, Sankaracarya  of Kanci, Acarya Susila Muni  and so many others did not earn the honour that they amply deserved in the malevolent home and foreign media as if Calcauttans would never have escaped filthy gutters without her but for the erstwhile Empire that plundered and ruined a lively, vibrant nation through brutal means. Decades of McCaulay brand anti-Hindu schooling infested nation’s mind and intellect with wretched / pathetic absence of self-esteem that prohibits us to stand up and be counted. Also, those supremely great men never sought recognition from the despotic Empire perched on a monumental heap of purloined wealth, blood / bones / sweat of lakhs who were robbed, tortured and slaughtered cruelly. To cap it all, post-1947, venomously anti-Hindu / anti-Bharata Leftist-Seculars, enjoying patronage of Nehruvian Congress, did their best to re-write entire history of the country for us to be ashamed of our ancient glory and intellectual / spiritual advances.

Not only Indian print-media but also foreign too viz. New York Times, The Washington Post, Newsweek, Time etc. just spew all anti-Hindu / anti-India trash while deifying malicious Missionary Teresa as if she were God herself. She always encouraged foreign media to roam around the country / corridors of power for malicious reporting, patronised them brazenly while maintaining ‘Holier than thou’ smokescreen for herself studiously. There have been numerous complaints of the Missionary Mother discriminating against Hindu  photographers while favouring foreign paparazzi. She had no qualms in accepting slush money as donation from fraudsters like Charles Keating, Robert Maxwell, Duvaliers of Haiti etc. As widely reported, poor in intellect, surrounded by sycophants, confirmed lier, making absurd claims like preventing thousands of child-births by advising poor people to observe continence, spending 6 to 9 months in Europe / USA every year, did not raise world-class hospital in Calcutta in spite of massive grants, ill-treatment of destitutes in her Homes, wrote letters of support in favour of paedophiles etc. etc. Catalogue of her commissions and omissions is extensive. One may even be inclined to rank her as a criminal minded pervert. What mattered to her was her mission of evangelism irrespective of nature of means. What an irony ! A sinister mission accomplished through dubious means, is all that she is being canonised for today by the Pope. She was neither a social worker nor a social reformer. She was just an agent of the Catholic Church with an agenda of proselytization. She would say that without any hesitation, “There is always the danger that we may become only social workers or just do the work for the sake of the work.”, as conveyed to Malcolm Muggeridge. By so-called reaching out to poor and destitute of Calcutta, she actually reached out to her agenda of Christ. Thus, she perceived “something beautiful in poverty and suffering” while her successor Nirmala went ahead with her ‘benign’ declaration, “Poverty is a gift of God.” It is a well-organised strategy to consecrate / deify her through canonisation for her devotion to Christ conversions.

Joan, ‘The Maid of Orleans’ was inspired to drive out British occupiers from France during Hundred Year War (1337 – 1453), turned victim of sectarian clashes of Christians, burnt alive for heresy, four concocted cases of posthumous miracle-cures were gathered as a measure of evidence to canonise her on May 16, 1920 by Pope Benedict XV in spite of stiff opposition from French Government. Thereafter, Saint Joan never ever performed even a single posthumous miracle cure at all !! In 1983, Pope John Paul II reduced the eligibility criterion to just two miracle cures posthumous or otherwise to render Teresa qualified for canonisation. It is a different matter altogether, she was hospitalised for pneumonia and Cardiac blockade in San Diego, California during Dec. 1991, expired in 1997 and beatified in 2003 by Pope John Paul II. This Pope beatified 1327 and canonised 482 in his Papacy of 26 years. Every Christian monastery had a Jew as doctor cultivating medical science while Christians cultivated miracle cures leading to a situation wherein 0.21% population of Jews in the world cornered 28% Nobel Prizes in Medicine. The Pope who canonised record number of saints, suffered from Parkinson’s disease and painful arthritis for several years and no miracle cure could mitigate his agony. He has been beatified by his successor Pope Francis prior to canonisation on the basis of one posthumous miracle-cure in Costa Rica and search is on for the second one to be eligible for canonisation finally !! The faith of Christianity itself appears to be a theatre of the absurd. National TV channel Doordarshan is engaged to telecast live all such ceremonies in a so-called secular country under a pseudo-secular Government / Constitution of the day.

Conversion in any manifest whatsoever, is a heinous crime against humanity. There is no other crime more diabolical than conversion. Isvara  NEVER forgives such conversion-agents.
TERESA was an arch enemy of Hindu-s, a conversionist to the core and a hardened Faith-Offender.

Enact a national law banning conversions of all varieties throughout the country except, I repeat, except homecoming into Hindu  fold.

Ban bodies like WORLD VISION, MISSIONARIES ( ?? ) OF CHARITY & CONVERSIONS and all others.

No anti-Hindu  activity be permitted on the land of Bharatvarsa. The law must state explicitly, every anti-Hindu  activity is an anti-national activity as after conversion, they are then loyal to the Vatican just as Muslims are to Mecca / Madina. There is hardly any difference between Christians and Muslims in so far as fanaticism, conversion-spree are concerned. They converted entire Africa by destroying their natural, indigenous faiths. All African faiths have been destroyed by Missionaries with criminal intent. Now they are being converted to Islam at gun-point by Boko Haram etc. In the process, converted Christians are being butchered mercilessly. Is it infallible justice of the Providence or divine jurisprudence and adjudication ?

These tough measures are an absolute must to save our nation, cultural heritage and our existence from Faith-Marauders like Teresa / Nirmala etc.