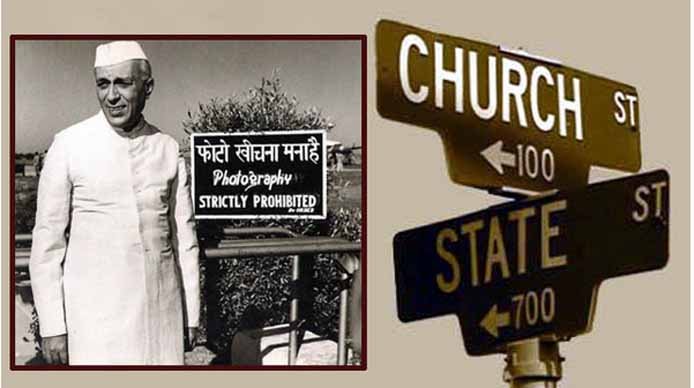 These are the high sounding linguistic acrobatics, only to hoodwink gullible Hindu-s, then gradually hustle them into dis-belief and non-belief… then the ground i.e. their minds are vacant for indoctrination with various forms of anti-nationalism, for nefarious interests to be vigorously pursued by elements hostile to the nation.

First linguistic-acrobatic genius is SECULARISM. It demands everyone to be faithless which is next to IMPOSSIBLE in a country based on and united by faith for the last thousands of years, notwithstanding the political freedom attained in 1947.

It is only the majority community that is expected to be secular and not others. Muslims / Christians are expected to be fanatically loyal to their respective faiths within the ambit of secularism. The bogey of secularism benefits CHINESE-INDIANS i.e. Indian communists most who are pathologically loyal to China / Cuba / North Korea. These Chinese-Indians worship their GOD who happens to be ‘LORD’ Karl Marx, follow all rituals of worshipping LORD KARL MARX while preaching Hindu-s to be secular.

Why should foul-mouthed Prakash & Brinda Karats be allowed to speak against the country and it’s cultural heritage? Irony of this country is that even rabidly communal Muslim groups scream secularism to Hindu-s !!! INDIRA GANDHI DID THE GREATEST DIS-SERVICE TO THE NATION BY INTRODUCING THE TERM OF SECULARISM INTO THE CONSTITUTION.

Negating cultural heritage of a country is a crime worse than sedition. History of this country shall never pardon her for that seditious crime. She too, was anti-national at that moment of our history. When even animals cannot remain faithless, Nehru-Gandhi Congress taught secularism to Bharatiya-s !!! This moronic secularism, a crude copy of the age-old British concept had been at the root of subversion of our Constitution on so many occasions, in cahoots with the Congress leaders and their foreign masters.

Another linguistic-acrobatic genius is PLURALISM. It is true that people of different races have been coming into this country all along, they have been welcomed with open arms and gladly allowed to practise their faiths, so long as it did not become a nuisance / hindrance for Hindu-s. They were expected to merge themselves into the concept of Bharatvarsa. Parsis did it very well by becoming sugar to milk. While Muslims were diametrically opposite, Christians camouflaged themselves somewhere between the two.

Masters and champions of the ‘DIVIDE, RULE & DESTROY POLICY’ incited these communities to assert themselves fanatically so as to undermine basic ethos of this nation and subvert it altogether in due course of time. To camouflage their nefarious intentions, they coined the term PLURALISM and unilaterally declared our society as a PLURALISTIC SOCIETY.

This Pluralism is nothing but divisive anti-nationalism, doing it’s best to create more and more satellite centres of gravity away from the real centre of gravity that is Hinduism, under whose ambit all other faiths would have enriched themselves. Champions of Pluralism know very well that no satellite centre of gravity i.e. faith can hold all other faiths together except the main one, Hinduism. Hinduism  alone is the unifying factor that can preserve the nation united and mighty. It is like a gigantic banyan tree under which all others live and flourish. All out destruction of the Hindu  society is the aim that they wish to achieve through the intellectual intellectual-ideological bankruptcy of Pluralism.

When Pluralism is established, how can ‘Unity in Diversity’ be left far behind ??? This is the next linguistic-acrobatic talent-term coined by ENEMIES OF THE NATION. Then, frequent warnings that ‘unity of the country shall be jeopardized if diversity is not allowed to have a free run’ !!! This diversity is nothing but divisive separatism, blatant attempt to destroy fundamental identity of the nation in Hinduism, perceptible even to a naive. The tomfoolery was conceptualised by Nehru himself, declared by his Congress (I)TALIAN as the greatest visionary, greater than even Adi Sankaracarya !!!

Concept of a homogeneous society, centred around it’s cultural roots with ample freedom for all, would have given rise to DIVERSITY IN UNITY wherein unity of all would be the final port of call. It would have stamped out the divisive, fissiparous tendencies of the society, nourished by the likes of Karats, Yechurys, Setalwads or Patekars.

There shall be several more such terms to befool the gullible, innocent inhabitants of the country. We shall then, visit them to rip them apart in the interest of this great nation.