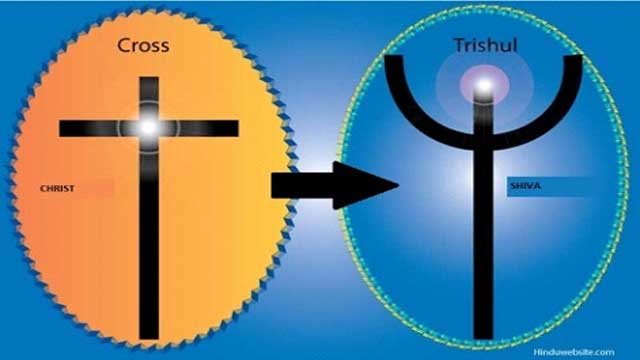 As you are The Seniormost ‘Pandaa’  of the Roman Catholic sect known as The Holiest Father, I respect you for the same. I wish to invite your attention to some of the things that your bank-rolled people have been doing in Bharata  as well as in other countries for quite sometime for the benediction of all.

Pope Ji, there are scores of people in my country who swear by you, who have been suffering from a strange malaise all these years chronically, which has now been diagnosed as the ‘Universal Brotherhood & Benediction Syndrome’. Palpable symptoms are nauseating and pathological, one tends to impose his entire ideological and religious faith upon others exploiting their abjectness, height of narcissism and indulging in violence too, to gain those ends.

Pope Ji, my reading about you is that you are an amiable man, not an old, outspoken indulgent  that your predecessor, POPE JOHN PAUL II was. Your predecessor was such an outrageous fellow that he called upon to ‘HARVEST BY FAITH’ all living Hindu Bharatiya-s in their own country on Bharatiya  soil !!

Since we have a glorious tradition of anti-nationals serving as our Prime Ministers coming from Congress (I)TALIAN, he succeeded in saving his skin by a whisker. But it shall not be so always in future. If a nationalist had been Prime Minister of the country at that very moment of history, his deportation would have been ordered at once from that very place back to your country, then imposed complete ban on his entering into the country for the second time.

Nation now belongs to a ‘GROWING VERY FAST’ breed of Bharatiya-s who would not allow a Chinese Ambassador to talk about dismemberment of this country right here in New Delhi, then continue as before, business as usual !

Coming back to the main point, the deadly disease of UNIVERSAL BROTHERHOOD & BENEDICTION SYNDROME is being passed on to innocent Bharatiya-s coupled with monetary inducements alongwith several other nefarious designs, not permitted either in the old or new Testaments. It was not propounded by your Jesus too.

Well, for that matter you have only one Jesus while we Hindu-s have many, so rich is our Dharma, richest and most ancient in the world. You and your people do not have even the basic courtesy of acknowledging existence of other faiths, leave alone Hinduism. You and your people have had no shame in destroying all aboriginal faiths in the African continent. Then you have the temerity of claiming, your faith is the greatest ! Pope Ji, how do you measure greatness of a faith ? Through ‘FAITH SPECTROSCOPY’ or ‘FAITH NANOGRAPHY’ ? Or VIRGIN MAMMOGRAPHY ?? Will you show me those instruments if at all they do exist ?

Pope Ji, all faiths originated from Asia, that too, mainly from Bharatvarsa. There was a full-fledged incarnation of a universal ‘God’ just a few thousand years ago and it was one of his frequent incarnations that occur time to time in this country. Sri Krsna  had administered a stern warning, humble counsel, cool-headed assurance, all in one to all of you –

Sloka  of the legendary wisdom of SRIMADBHAGVADGITA, simply means, whenever there is resurgence of evil and devils (like your missionaries), He incarnates to decimate those demoniacal ones, re-consolidates the order of righteousness.

Pope Ji, depending upon complexity of the devil-dom, he sends an appropriate slayer of demons in question. For Ravana  came Sri Rama, for Kamsa, Jarasandha, Duryodhana  etc., came Sri Krsna, Param Brahma  Incarnate. Since you may deny these examples as these do not belong to your recent memory, I would like to proffer some recent examples to drive home the point into your fanatic brains.

Pope Ji, for every Saddam Hussein, he sends a George Bush, for every Osama deputes He an Obama !! For every converted Vellupalli Prabhakaran, he sends a Mahindra Rajapakse… and for every high flying conversionist like Y. Samuel Raj Shekhar Reddy, he causes a helicopter crash …!! I hope, by now you are convinced about the fact that Hinduism  is the faith that is indestructible and immortal. Simply because in it’s fundamental form, it is the faith of your God / our Isvara  Himself !

Pope Ji, Christianity is the faith of Jesus while Vedanta Darsana  is the faith of Param Brahma  Himself !!! We already have ‘Vasudhaiva Kutumbakuma’ instead of ‘UNIVERSAL BROTHERHOOD & BENEDICTION’ of your’s. Our Vasudhaiva Kutumbakuma  is very sweet and all encompassing, without ravaging anyone’s faith or life-style. You may try it yourself. There is a method in this madness of Truth !!

Pope Ji, whenever anyone tried to obliterate Hinduism, they were invariably destroyed. If you read history impartially, it shall be more than clear to you. Certainly, do not read the history written by ‘Eminent Historians’, likes of which are Irfan Habibs, Romilla Thapars and RS Sharmas etc.

Pope Ji, I am NOT worried about safety and security of Hinduism. I am really worried about safety and security of your faith, and missionaries who are engaged in propagating it nefariously, I am worried about the posterity when a conversionist ‘Mother’ Teresa would be condemned as ‘Bharata-Kalankini’ instead of Bharata-Ratna. I hold you a good man and as a nationalist and true Hindu, I want you to survive alongwith your faith, howsoever imperfect / defective that may be, and prosper in this world like all others.

Pope Ji, in your next midnight mass on Dec. 25, from the ‘Holy’ window of your ‘Holy’ flat in Vatican, declare categorically and unequivocally, to the hysterical crowd and to the entire world, including your army of missionaries –
That you respect all faiths & regard them equally equal.

That you have strictly prohibited conversions on any ground whatsoever.

All welfare / philanthropic activities shall be routed through local governments alone.

‘Holy’ Fathers / Mothers / Sisters & Brothers of Churches shall no more indulge in philanthropic activities in other countries directly.

Pope Ji, such a proclamation shall go a long way in restoring your lost sanctity, whatsoever. If not, then the hostilities shall become insurmountable in future as conversion of faith is a heinous crime against humanity. Uprooting someone from his / her faith is a demoniacal felony. It is also enshrined so in Srimad Bhagvadgita. I hold your missionaries as hardened FAITH-TERRORISTS / FAITH-CRIMINALS and nothing else.

Pope Ji, if you fail to heed the caution, you shall invite terrible retribution from the Divine Providence. Then you and your ‘Holy’ Brothers / Sisters shall have a lot to regret about and shed tears for the same. I do receive such signals from The INFINITY to that effect.

Pope Ji, I am not threatening you. I am only advising you as a good friend of your’s. Kindly do not commit mass-suicide  at the hands of Providence. Take this friendly, unsolicited counsel very very seriously. Do meet me whenever you happen to be in Bharata  next…not for harvesting our Souls, of course !!!