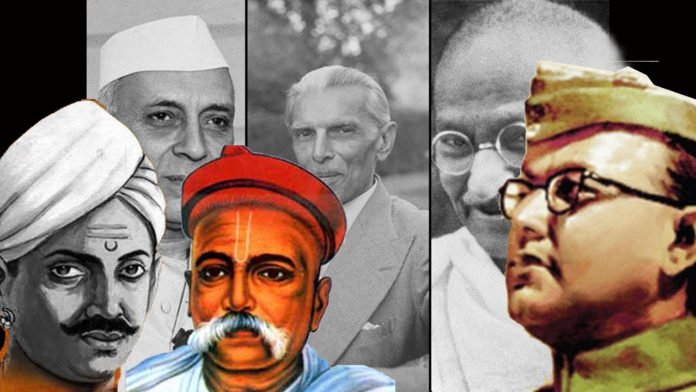 Our freedom movement had been quite extensive, spanning almost two centuries (It is still going on to shake off BRITISHO-CRACY, then instal BHARATIYO-CRACY). There were several personalities who contributed their might to the movement. It has always been a matter of speculation before historians as to who was exactly responsible for attainment of freedom, particularly in view of MK Gandhi’s role, whatsoever.

For the movement to attain independence from British plunderers, these were the three prominent ones who caused strategic turnaround at crucial junctures and imparted the thrust of decisive blow to ensure their ouster from the country.

MANGAL PANDEY  provided the spark of 1857 revolution wherein thousands of Firangi-s were beheaded with swords. The impetus that this great revolutionary provided, the mass revolt that he unleashed, chilled Firangi-s to their bones. Those COLOURLESS DAYLIGHT PLUNDERERS whom we call WHITES, from the so-called ‘GREAT’ BRITAIN had then, first-hand maiden experience of Hindu  ferocity.

For the first time, they discovered themselves militarily weak and susceptible in spite of their massive gun-power. 1857 was a perfect mass revolution in spite of it’s being an unorganised, sudden outburst of Hindu-wrath, which succeeded very well in shaking the petty-minded, haughty empire based in London. It is also documented that Britishers had actually abandoned Bharata, fled to Britain, then called back with ‘Honour and Support’ by the three traitors, Maharaja-s of Patiala, Jind and Gwalior.

LOKMANYA TILAKA  The economic blockade that he unleashed on a mass scale through his ‘Swadeshi Andolana’ was a marvellous master-stroke of strategy to shake them out of their treasury of loot and plunder. He wonderfully blended it with ‘Satyagraha’ that made ‘Swadeshi Andolana’ a lethal weapon to strike at them. He effectively humbled the ‘Pindari’ empire of London, proved them highly susceptible to brain-power economically. He displayed before the world and proved beyond an iota of doubt, entire British wealth / splendour was just loot & plunder and nothing else.

NETAJI BOSE  provided the final, decisive blow to the ‘Firangis’ through his Indian National Army. When INA started advancing towards Bharata, British plunderers were mortally scared as horror memories of thousands of ‘Firangis’ being beheaded in 1857 came back afresh with a bang into their brains. To save their lives, they decided to quit for the better, in their own interest. Netaji’s decisive role was later confirmed by the then British Prime Minister ‘Sir’ Clement Attlee in Kolikata, years after he relinquished office, in response to a pointed question.

They are the nationalists who deserve to be adored by the entire nation. I do not really intend to belittle roles of other heroes of freedom movement. They all contributed immensely by keeping the cauldron boiling. However, decisive and strategic thrusts at the most critical and vulnerable points of history were provided by only these three freedom fighters. Their strategic input / contribution facilitated all others work in harmony to attain the goal of freedom.

I call upon historians of all hues, ‘EMINENT’ as well as not so ‘EMINENT’, from all over the world to react and demolish these observations.

Let us also look at the other aspect of this freedom phenomenon.

Country attained partial freedom through ‘India Independence Act 1947’ passed by the British Parliament (what a monumental shame !! Our independence being enacted by a conclave of PINDARI-s / LOOTERs / PLUNDERERS in a foreign land !!!) and ‘Transfer of Power Agreement 1947’ was signed by Mountbatten and our very own Prime Minister Nehru. Lady Edwina Mountbatten facilitated the process in her ‘best possible way using all her personal influence’ with the consent of her ‘bonafied’ husband, ‘Lord’ Viscount Mountbatten (every Brit wants to ‘Lord’ over the world !!). The independence remained partial in all respects owing to the highly condemnable roles played by this Troika of Double Partition, on two sides of the country, east and west.

CONGRESS-PITAA ‘MAHATMA’ MK Gandhi  By 1947, he was mentally deranged. This insane fellow believed, freedom could be attained by drinking goat’s milk after taking colonial, colourless, Caucasian slaps on both cheeks. However, this confirmed enemy of Hindu-s could not do anything whenever Muslims slapped and slaughtered Hindu-s. I personally believe, this enemy of Hindu-s was deservedly slapped with bullets by a great nationalist otherwise country would have certainly witnessed third partition in Hyderabad. In response to a pointed question, the same Clement Attlee confirmed while on his visit to Kolikata, Gandhi’s ‘Charkha-Bakari-Khichri Andolan’ for independence did not matter to Britishers at all !!

‘PANDIT JI’ Jawaharlal Nehru  He was also known as ‘PANDIT JI’ !!! All his tom-tommed achievements have either crumbled down or become a perpetual liability for the nation (for instance, IITs that he raised with fanfare served America very well !!!). It is a tragi-comedy that this man maintained (in the words of his own sister Vijay Laxmi Pandit !) a very beautiful relationship with wife of the outgoing Viceroy, from whom he was to grab freedom and stewardship of the country !! She was planted by Britishers as a honey-trap for PANDIT JI and she succeeded very well.

Years later when British Foreign Secretary ‘Sir’ Alec Douglas Hume visited India, he was pleasantly surprised to see a dozen English newspapers from New Delhi alone. He openly ‘complimented’ us for carrying on with the (so-called) British values, culture and ideals even after so many years of their departure !!! That was the direction that this ‘PANDIT JI’ Prime Minister imparted to the country. He back-stabbed the nation by secretly signing ‘Transfer of Power Act 1947’ with the outgoing Viceroy to perpetuate anti-national doctrine in the country. It is a Himalayan shame for his family and the Party run by them.

QUAID-E-‘DOZAKH’ Mohammed Ali Jinnah  He has already been condemned (and admired too by some !!) a lot. It shall be an instance of self-humiliation if I comment upon this emaciated (in all respects indeed) man, thinned to his bones by TB, who should either never have been born or assassinated / died long before his debut into politics.

I hope, this article will add a new dimension to the investigative faculty of historians and all other Bharatiya-s.