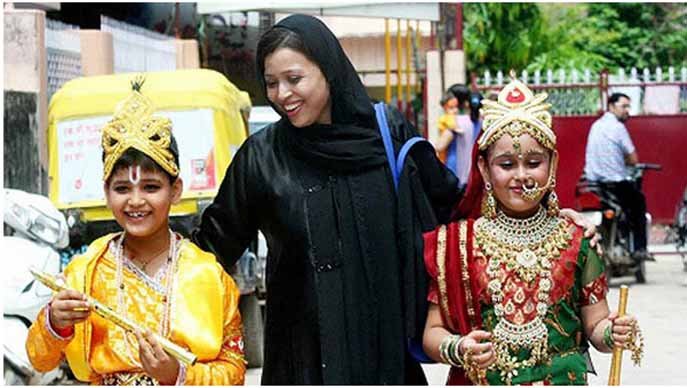 ‘Allah’ is the formless Isvara, absolute and indescribable as conceptualised by Muslims through Koran. They have been struggling to attain Him through Namaz / Haj etc. for the last hundreds of years albeit without any perceptible symptoms of success, partial or otherwise, so far.

Reason is not very difficult to understand. You just cannot climb over to the terrace of your house without using ladder / staircase. Through Namaz / Haj, Muslims aspire to jump over, onto Allah-Bandwagon without using any stepping stone / facilitation whatsoever.

Birth after birth they have been wallowing in this world, collecting more and more Karma-s to work out. It has now climaxed into highly aggressive, violent conduct throughout the world… even within Muslim countries. Even then they keep parroting, Islam is a religion of peace…

Christianity has an altogether different story to tell. They have the ladder, they have the staircase but no terrace to arrive at as Jesus is the ultimate and not Param Brahma. If you do not worship Jesus, you are not locatable or identifiable.

If you combine these two, through the springboard of Jesus, it is possible to attain Allah !! However, will they do that ? NEVER. It is a blasphemy of the worst kind. Mutual recriminations that are sanguinary, have been continuing for the past hundreds of years, destined to continue infinitely. Both faiths appear to be incomplete / imperfect, partially or otherwise.

Sanatana Hinduism  extends a perfect and complete solution of Faith-Therapy. Attain the Ultimate, NIRAKARA BRAHMA  i.e. ‘SIVA’ (Muslims have Allah for that purpose albeit do not know how to be attained to Him !!). By worshipping SAKARA BRAHMA  i.e. Sri Rama, Sri Krsna, Swami Ramakrsna Paramahamsa… (Christians have a poor counterpart to talk about i.e. Jesus alone for this purpose) succeed for sure, to attain liberation from the shackles of mortality and miseries. Sri Ram, Sri Krsna  and Swami Ramakrsna  were no ordinary human beings. They were the real-life incarnates of the possibility of divinity of ultimate redemption.

If Muslims and Christians are safe and sound in this country, it is solely due to the majority community of Hindu-s and Sanatana  culture. Hindu-s have been tolerating lot many of their nefarious activities which any other country would not have right in the very begining. In fact, they would have been dealt with very severely for all their anti-national tantrums. They must learn how to be perpetually grateful to the Hindu  community and Sanatana Hindu  culture while dwelling in this nation.

Liberation through Hinduism  alone, I repeat emphatically, through Sanatana Hinduism  alone is a certainty. As every Hindu  is convinced, his / her path is perfect, redemption from the world certain, he / she is always at peace with himself / herself. This is the only community in the world that has always been calm, serene, tranquil…never invaded any country…never attempted to destroy any faith whatsoever, reflecting their supreme self-confidence…the record is too glorious to be narrated in brief.

Islam and Christianity are not Swadesi  faiths. These have been smuggled into the country forcibly by several bands of marauders and murderers. They are perpetually in a state of turmoil and torment others to turmoil. Their intentions are malevolent, malafide, inhuman and despotic.

‘Swadesi / Bharata Swabhimana’ must include pursuit of SWADESI FAITH too. Christians and Muslims must be encouraged to pull out from their faith-turmoil and adopt ‘SWADESI’ FAITH i.e. SANATANA HINDUISM  in a big way.

Hinduism  alone is the ultimate solution to all of their problems. After beholding renaissance and resurgence of Sanatana Hinduism  brought about by several Swami-s with latest one being Swami Ramdeva,  they should not hold even an iota of doubt / apprehension in their mind about the supreme superiority of Sanatana Hinduism  and the certainty of their redemption through that.

In this country, they can be sure of their protection from persecution by their respective religious verticals, should they opt for the transformation. They shall be welcomed into the Hindu  fold enthusiastically.

SUCH A UNIQUE PROTECTION IS NOT AVAILABLE ANYWHERE ELSE IN THE WORLD.