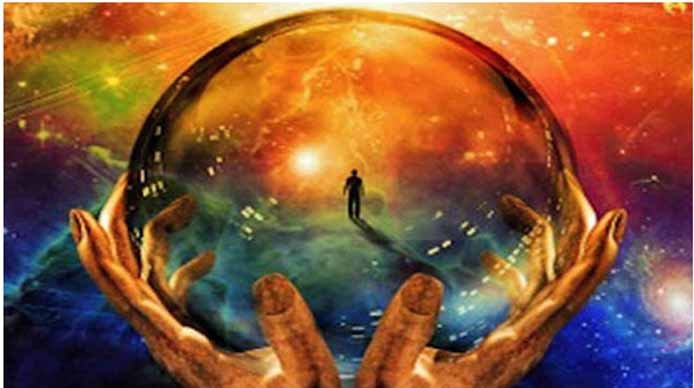 This question is often raised at various fora inviting all shades of responses. The question is as enigmatic and ceaseless as are the answers !!

In the holy city of Varanasi, some jealous Pandit-s let lose a mad elephant after Adi Samkaracarya  with the malevolent intention to harm him. They were probably not relishing his erudite thoughts on dualism vs. unity of entire existence. When Adi Samkaracarya  fled for his life, someone taunted,

KIM PALAYANAM ? GAJOPI MITHYA !   i.e  WHY THIS RUNNING AWAY ? THE ELEPHANT IS UNREAL !!

Quite mystically, Adi Samkaracarya  expounded THEORY OF RELATIVITY thousands of years before Albert Einstein did.

When you are dis-incarnate, subtle world appears real while the gross one, unreal which had appeared real earlier.

So by a stroke of genius, the great legendary Master left it to the beholder to decide which one he / she wishes to hold as real or unreal and with which frame of existence !!!!!

Param Brahmatma  does exist otherwise who would have manifested into this universe ? A non-existent entity CANNOT manifest itself.

With entire creation meant for the other one without being Bhokta  itself, like a camel carrying saffron  II III / 58 II

Param Brahmatma  can and does manifest essentially because He Himself is not the “consumer” of the manifests. He remains detached as a Saksi.

Existence of the world a certainty owing to it’s creation being entirely rational, relevant and bereft of any evidence to the contrary  II VI / 52 II

So it is now proved beyond doubt, world / universe does exist, shall continue to exist so long as it continues to exist !!!