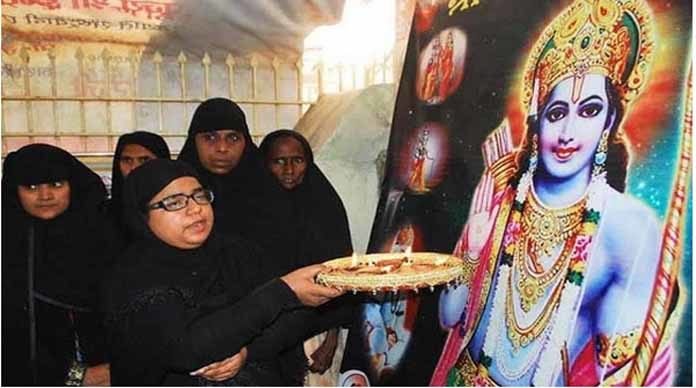 Because Sri Rama  is the heart and Soul of Bharatvarsa. It is a reality, indisputable and irrefutable to the core. If they wish to argue that Sri Rama  did not exist, then it is all the more essential that they adore His persona, His character as the mark of being ‘Maryada Purusottama’.

Ancestors of all Muslims and Christians of today were diehard worshippers of Sri Rama. Those ancestors were forcibly converted to Islam / Christianity at the point of swords, guns, rape, murder and so many other tortures of all varieties.

Islam and Christianity were smuggled into the country through dubious means. It was forced upon innocent, defenceless Hindu-s who were too sober and genial to hit back ferociously. Just as we were forced to use and consume a plethora of imported goods all third-rate and useless, their ancestors were brutally forced to follow these imperfect religions at the cost of the real & perfect truth ferreted out and established by our greatest saints and sages.

What our Rsi-s and Muni-s researched and established thousands of years ago, nobody has been able to do even a grain-sized addition to that so far. Sri Rama  symbolised the best of those traditions, infinite wisdom and the golden culture that was there in our country. He is ‘Param Brahma  Incarnate’. By no stretch of imagination can he be compared with Mohammed or Jesus.

Sri Rama  is the distinct and inviolable identity of Bharatvarsa. Any other mark / symbol of identity shall never be accepted by anyone, not even by Param Brahma. Muslims and Christians of the country must worship Sri Rama. Sooner they begin, better in their own interest.

Also, they are under no more brutal compulsions of those years which forced their ancestors to convert. They must now come back home to Hinduism  earliest possible. There is absolutely no merit in continuing with those legacies which mark brutalities of the worst kind as well as worst crimes against humanity.

This homecoming to Hinduism  shall dissolve more than half of the social tension and attrition prevailing in society. They shall be accepted by the Hindu  community very well.

Their homecoming to the Hindu  fold shall herald creation of a casteless society. Mughals had played a major role in forcibly imposing the evil of casteism alongwith several other evil practices upon Hindu  society. It shall dissolve the sense of guilt which is entrenched deep in their minds. No more shall there be minds torn between two loyalties, Mecca-Madina on one hand and Vatican on the other.

NATION SHALL TRULY BECOME ONE, IN EVERY SENSE OF THE WORD.

I hope, even the cynics, sceptics, critics, agnostics and secularists (sadly enough, large number of them are Hindu-s !) would welcome it, encourage them to do the  homecoming to Hinduism  and accept Sri Rama  as their identity. I further hope, they shall not declare me a Hindu-Zealot. It is just that I am completely devoid of the wretched ‘DINA-HINA  Mentality’ prevailing among majority of Hindu-s as a proceed of McCaulay’s valueless education system imposed upon the nation as Isvara  has blessed me enough courage to call spade a spade.