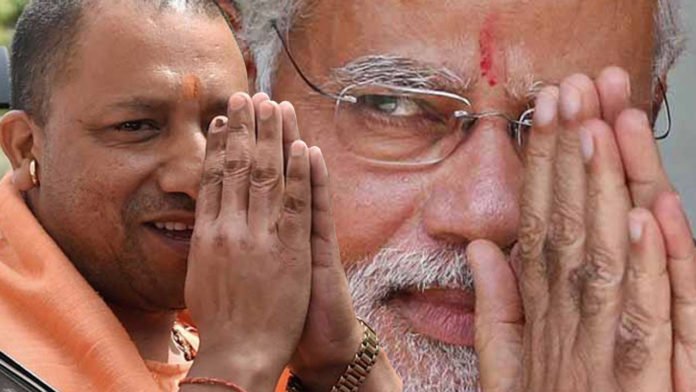 Electoral victory in UP has been “Bhuto Na Bhavishyati” order of historic victory. Not merely opposition leaders struggling to survive, gasping for breath are dazed and stunned, but also entire brigade of “enemies of the nation” within the country and across the world.

However, Statuette of Mayawati was live enough to accuse BJP of electoral malpractices through EVM and demanded Ballot-Paper polling after the battle was over !! While you have been blazing all your guns for a Digital Bharata, there is a ‘Dalit visionary’ asking for neither digital nor analogue but ‘medieval India’ so menacingly !! Interesting scenario indeed.

When you heralded the call of ‘Congress-Mukta Bharata’ in 2013/14, nobody appears to have visualised that the clarion call would eventually super-evolve into ‘Nehru-Gandhi-Vadra Dynasty Mukta Congress’ too !!! And ‘Crown Prince’ of the dynasty has been proved to be brachycephalic, unabashedly brandishing his imbecility with flavour and fervour before the country, before the world !!

Nation’s electorate never had it so good, so much amusement for days together. Kindly ensure in true spirit of democracy, the scion does not retire from politics and continues entertaining the nation in these days / years of hard work and reconstruction under your leadership. With Lalloo Yadav gradually fading away into dustbin of posterity, ‘Crown Prince’ alone is eligible to succeed him with the legacy. Anti-Bharata media are so stunned that in a mechanical way, they started predicting ‘clean sweep’ for BJP in LS 2019, full two years in advance !! So stunned, almost terror struck !!

I believe, even Jawaharlal Nehru / Indira Gandhi shall not be able to recover their security deposits, were they to contest LS 2019 at Raebareli / Amethi / Phulpur. Such is awakening in the country with pangs of development / integrity being so vociferous now. Entire ‘Vikas-Yatra’ from 2014 to 2017 has truly been a historic one.
On every front, nation is undergoing structural reforms. Nation never had it so good before, really.

Any number of congrats / best wishes shall not be able to do justice to you Mr. Prime Minister.

Five years long spell of all sorts of ‘secular’ atrocities perpetrated on Hindus and the State under the leadership of that “Rampur Ka Mohammed Ali Jinnah”, Yogi Adityanath is the most appropriate selection for the position of UP CM.

Pragmatic wisdom behind the selection is further affirmed by same set of malicious arguments being lobbed at him by ‘Secular-Ratnas’ from media / political parties which were liberally invoked to malign Gujarat CM not very long ago. They possess an uncanny talent to smell coffee !! More they carp and cavil at him, more and more successful / effective is he going to be in days and years to come.

Very, very interesting and mind boggling chapter has been added to nation’s history.