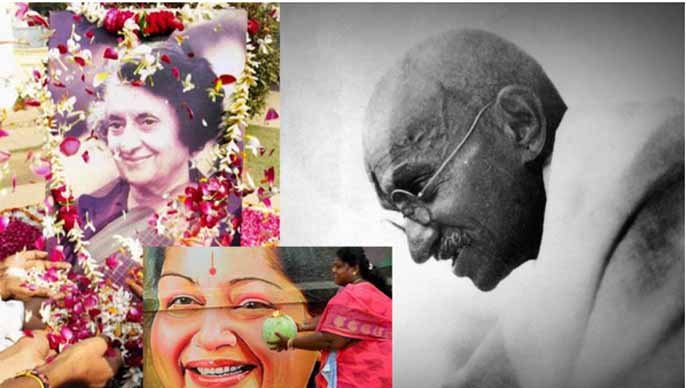 As a result, we tend to Deify or Godify every man or woman who is an achiever.

We tend to use certain words loosely like ; Great, Mahan, Mahatama etc.

In medieval era this was acceptable, but not in this modern era.

As a result of this we made Bapu – Mahatma, Indira – Durga, Sachin- God of Cricket, Jayalalitha – Amma, etc. We often see on TV, people touching the feet of the political leaders. More often than not they are not doing this out of respect. They would ensure that no one criticises their beloved leader. Look at the way various political leaders line up at the MAZAAR of Amma, these days.

Often this kind of eulogising is done by small men who themselves are professionally incompetent and look forward to further their careers by thrusting GREATNESS on their Bosses. Don’t we see this happening in our offices.

This is what Congressmen have been doing and surviving for decades. They thrusted Greatness on their Leaders and as a result they started appearing larger than life.

And because they are human beings and susceptible to the same follies that we are, these leaders sooner or later fall from grace and often cursed and abused by the people, later on. Or else they are continued to be godified by one section for their own vested interests for eg Cong does for Nehruji and Indira Gandhi.

Yesterday, what had happened in Loksabha, when Modiji entered Loksabha, vindicates my view point.

Yes, he is a proactive and Dynamic Leader who has not only caught the imagination of many and struck the chord with masses. But that does not mean that People should Godify him and eulogise him to an extent that HE APPEARS LARGER THAN LIFE.

Yes, he is hard working and his team is making Policies which can bring back India Growth story on track.

But despite this, Modiji, is a human being as susceptible to mistakes and follies as we all are.

Hence this kind of attempt made by small men around him must be criticized.

Many years back I had read a small write up on LOYALTY and INTEGRITY and since then followed it despite once having faced a problem with my Boss who did not like this principle.

Allow me to narrate that definition of LOYALTY because may be it can help some.

LOYALTY is mainly of Four types.
ONE, LOYALTY Towards Nation. This is always the Highest Loyalty and Supreme.