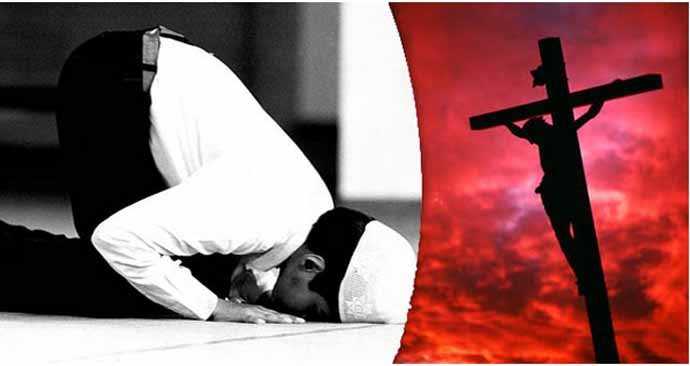 Bharata is one of the most diverse nations in terms of religion being birthplace of four major faiths, Sanatana Hinduism, Jainism, Buddhism and Sikhism. Hindus constitute close to 80% of the population, country also has region-specific religious practices viz. Jammu & Kashmir is Muslim majority state; Punjab has Sikhs in majority; Nagaland / Mizoram have Christians in majority and States / regions like Sikkim, Ladakh, Arunachal Pradesh and Maharashtra have large population of Buddhists too.

Muslims in Bharata constitute third largest Muslim population in the world accounting for over 14 percent of the nation’s entire population yet known as “Minority community”.

Freedom of religion in Bharata is enshrined as a fundamental right guaranteed by Article 15 and Article 25 of the Constitution of Bharata. Constitution’s Preamble was amended in 1976 to state that Bharata is a secular State by Prime Minister Indira Gandhi during Emergency that she imposed to throttle opposition and remain in power.

Every Bharatiya enjoys the privilegeto practice and promote their religion peacefully within the constraints of public order. Moreover, country has always been a safe and secured heaven for those persecuted on religious grounds across the world. Jews were granted land and trading rights after being persecuted by Muslims some 2500 years ago and now they are known as Cochin Jews.

According to their records, date of first arrival of Jews is purported to be 562 BC. In 68 AD, more Jews arrived in Kerala to escape persecution by Romans in Jerusalem. Christianity is believed to have entered into Bharata during 1st century through St. Thomas.

Tibetan Buddhists have now adopted Bharata as their home with Dalai Lama as the High Lama of Gelug School of Tibetan Buddhism. Nation also has world’s largest Bahai population who accepted refuge in Bharata owing to religious persecution in Iran. So in reality, Hindus / Bharata have always been religion-neutral since time immemorial when no one had even heard of secularism.

Among all these arrivals, Islam and Christianity  were the evangelical orders who believed, proselytization by any means happens to be their fundamental right and began practising that after a few years of lying low to gear up for their sinister intentions.

Saint Thomas the Apostle of 48 AD was followed by Bartholomew in 55 AD. British Government permitted entry of white missionaries in 1837 owing to the pressure exerted by evangelical lobbies. Religious conversions have caused hostilities in Hindu families and society leading to murders, murder threats, fear of being disowned by parents, friends, society etc.

Anti-conversion laws have been enacted in States like Arunachala Pradesh, Madhya Pradesh, Odisha, Gujarat, Chhattisgarh, Himanchal Pradesh and Rajasthan. When Catholics challenged these laws in Supreme Court as violative of Article 25 of the Constitution, Court opined, “What is freedom for one is freedom for the other in equal measure and there can, therefore, be no such thing as a fundamental right to convert any person to one’s own religion”.  This move was criticised because it ignored Article 25 and it did not differentiate between forced conversion and conversion by persuasion or inducement.

When a person is born, he / she inherits a plethora of features from his family, society as well as the nation. Faith / religion is the most important element of this transfer / inheritance of values / legacies. He / she is brought-up as well as educated on the lines of those composite values which his family had received from society and nation.

Every family, society and nation enjoys fundamental right to preserve and consolidate all those elements that constitute their distinct identity. It is so much sacrosanct that it is outright outrageous and diabolical even in concept to visualise a family, society or a nation substituting their entire ethos with another one, pedalled by a gang of outsiders masquerading as persecuted refugees.

One inherits faith from his / her family which in turn, is nurtured and protected by the society / state. That is how the society and state derive their distinct identity and grow proud of that in due course.

If your next-door neighbours change their religion, is it not going to profoundly impact you advesely ? Are you not going to be worried about the severe repercussions that it shall bring about upon your family, comprising of women, teenage girls, boys ? Should Maoists / Naxalites be allowed to continue with their treachery and anti-nationalism owing to their faith in so-called in Naxalism ?  Are we not affected by the atomic weapons and Islamic fundamentalism of our next door neighbour, Pakistan ??

Cardinal ingredient of democracy is that we all are free so long as we and our actions do not impact others. Change of faith whether forcible, induced, reluctant or at one’s own pleasure certainly impacts the entire society as well as the nation. When converted to Islam, Muslim is then loyal to Mecca / Medina. When converted to Christianity, neo-convert is then loyal to the Vatican.

Conversions are a severe threat to our cultural ethos and identity. It is a potent means of destroying families, societies and nations. Society / nation have every right to prevent us from conversion through any means whatsoever.

Hence, freedom to change faith / religion CANNOT be an absolute right. It is NOT even a fundamental right just as the right to property is not a fundamental one. This freedom must be constitutionally curbed as every conversion affects everyone else in society, in the country for the worse.

No one enjoys the right / pleasure to distort distinct identity / heritage of a society or nation. Distinct ethos / identity is the absolute right of every society and nation.

Conversion amounts to anti-nationalism because one disowns all that he / she had received from the nation, society as well as family. PLAINLY SPEAKING, CONVERSION IS A CRIME OF SEDITION.

I call upon the nationalist forces of the country to mount enormous pressure on the Government to ban conversion constitutionally by law. The crime of conversion must be bracketed with criminal acts of drug-trafficking, abduction etc.

CONVERSION OF FAITH IS THE WORST CRIME AGAINST HUMANITY. IT IS ABSOLUTELY AND ENTIRELY INDEFENSIBLE, CANNOT BE CONDONED UNDER ANY CIRCUMSTANCE.