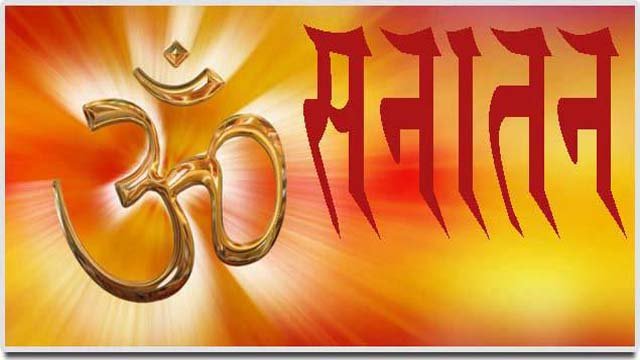 Sanatana Hinduism  is a unique faith, as old as the life of existence itself. Isvara’s own Dharma  at that. Throughout it’s history, whenever there had been attempts to destroy Sanatana Hinduism, those aggressors themselves were destroyed. To my limited intellect, following factors are primarily responsible for the imperishability of Sanatana Hinduism –

Most fundamental faith Sanatana Hinduism  is elemental in nature. Like Akasa, it pervades all faiths in varying degrees. Cosmic journey in true sense, begins with the pursuit of Sanatana Dharma  alone. Sanatana Dharma  nourishes all other faiths. Roman Catholics have accepted lot many Sanatana Hindu  values, Parsis worship Suryadeva, Muslims worship ‘Chand’ and ‘Kaba’ i.e. another version of Sivalinga, Namaz is an unrefined form of worshipping ‘Nirakara Brahma’ (any number of denials cannot obliterate the truth), Buddhism, Jainism  and Sikhism are modifications of Sanatana Dharma.

Just as no drink is possible without water, no faith can exist without nourishment from Sanatana Dharma. Any attempt to destroy Sanatana Dharma  is simply suicidal for the destroyer-oppressor.

AHIMSA  Sanatana Hinduism  is the fountain-head of Ahimsa. Barring Buddhism and Jainism, no other faith pursues Ahimsa  as indulgence with non-vegetarianism / animal slaughter is the accepted norm. Man is the natural protector / custodian of plants / animals appointed by the Providence.

Killing birds and animals, destroying trees for any reason whatsoever, is a terrible crime against the Supreme Entity. Sanatana Dharma / Hinduism  has always been protector of nature, hence this faith can never be allowed to be destroyed by anyone, by Param Brahma. Anyone attempting to destroy Sanatana Hinduism  shall be destroyed himself as the principle of Ahimsa  is sacrosanct and inviolable.

SRADDHA / TARPANA  These are extended to Pitr-s in the form of food and water in a specified manner by every family. If Pitr-s are not propitiated properly, they do not attain peace, unable to move beyond in the cosmic journey. Sanatana Hindu-s are the only community in the world where the institution of Sraddha  and Tarpana  is sacrosanct.

YAJNA / HAVANA   Vedic  scriptures have prescribed various Yajna / Havana  etc. to be performed in the spirit of propitiation of celestial deities. When these deities are propitiated, they bless the bountiful rains and blessings. Rains give us all living beings food and inhabitable environment. Dissolution of Sanatana Dharma  means denial of propitiation unto celestial deities, no rains, no foodgrain and fruits, un-inhabitable environment and all that leading to disruption of the cosmic order and destruction of the world. Ostensibly, no celestial shall tolerate / allow Sanatana Hinduism  being destroyed by any number of Mohammed Ghoris / Ghazanavis / Brother-Benedicts or Virgin-Mothers.

As Hindu-s are the only community who perform Yajna / Havana, Hindu-s are the only community who are sustaining, nourishing the entire world, rather entire bio-world. ENTIRE WORLD / ENTIRE BIO-WORLD IS INDEBTED TO HINDU  PRACTICES / RITUALS AND HINDU  COMMUNITY for ensuring and assuring not only their well-being but also their very existence. Thus, celestial deities protect and guard the sacrosanct institution of Sanatana Hinduism.

AVERSION TO CONVERSION  Sanatana Hinduism  does not subscribe to the doctrine of raising numbers through conversions with respect to one’s faith. This is one evil that every Hindu  hates, as much as he hates killing birds, animals or destroying trees. Conversion of faith is a brutal crime against Param Brahma. Had Param Brahma  subscribed to the ideology of just ONE FAITH, he would not have created so many varieties of faiths across the world. Purpose of creating the universe by Param Brahma  is absolutely different from what has been understood by those who believe in just one theological invention.

Since conversion strikes at the very root of the principles of Param Brahma, irreversible destruction of those who wish to convert Hindu-s, is absolutely certain because Sanatana Hinduism  is the only faith that preserves and protects the divine principle of no conversion whatsoever. All those evangelist-missionaries shall be destroyed very miserably.

REPOSITORY OF ABSOLUTE WISDOM  Sanatana Dharma  alone is the trustee / repository of the Absolute Wisdom enshrined in scriptures like Srimadbhagvadgita, Samkhya Darsana, Yoga Darsana  of Maharsi Patanjali  etc. These revelations are simply incomparable, no other faith can claim with such a high degree of accuracy, refinement and sophistication of thoughts that these scriptures possess.

These revelations amount to ‘Live telecast’ of the mysticism of the Absolute Divinity which no other faith has. Sanatana Dharma  is Isvara’s own Dharma. Anyone attempting to destroy the wisdom, shall be destroyed himself.

These are the four sacrosanct principles of Sanatana Hinduism  that ensure, destroyers of Hinduism  are destroyed themselves.