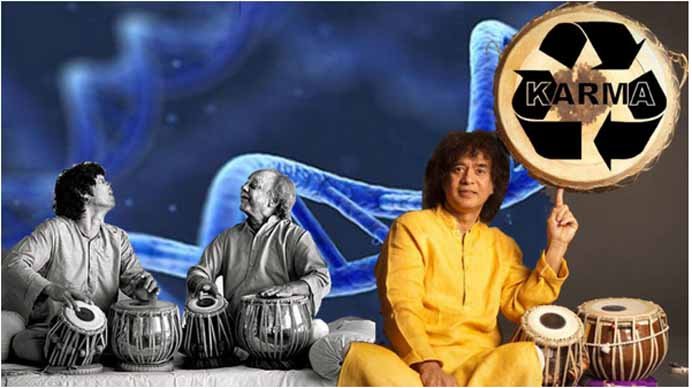 Biological Sciences hold the view that DNA of a living being is the individual-specific helical structure of four Nucleic Acids viz. Adenine, Thymidine, Cytosine and Guanine. These four Nucleic Acids are used in innumerable permutations to give rise to Genus specific, Species specific and individual specific GENETIC CODE. The Code provides a very specific blueprint of the individual, inherited from both parents, carrying secrets of all physical attributes, possible accomplishments, diseases, life-span, so on so forth.

Genetic Code gave rise to the fallacious concept of GENETIC / INHERITED DISEASES. Genetic / inherited disease does not exist at all ! That is where the knowledge of Science has miserably failed while the wisdom of spirituality with respect to Karma, succeeded completely. We shall examine all that how.

In a given life-span, every individual performs plethora of Karma-s, redeems quite a few long outstanding ones and creates a lot more Samskara-s of Karma-s afresh in the course, to be redeemed later in subsequent incarnations. That is how the cycle of mortality goes on life after life, death after death. Every Karma  has it’s own specifics with respect to intensity, content, gestation period and nature of proceeds that is destined to be delivered whenever it matures. It may be explicitly understood by striking a rubber ball to the ground. Stronger the force at the point of hitting the ground, higher the ball rebounds with a comparable force.

Karma-s that are matured to deliver proceeds, search for an appropriate ambience, compatible specifics to deliver pre-ordained proceeds effectively. In other words, matured Karma-s search for an appropriate family / clan / society / nation to annihilate themselves through redemption i.e. by delivering proceeds. Quite rationally, matured Karma-s decide the family having members with same or similar Karma-s where the Soul carrying those unredeemed Karma-s, is to be born. Karma  alone decides details of subsequent embodiment.

Karma-s similar in content and intent, enjoy an affinity between as well as among themselves, a factor of tremendous cosmic significance. Translated into action, it implies that a person destined to die of a particular disease, is very likely to be born to a person who too, is likely to succumb to the same disease or is already suffering from the same disease…imparting an entirely a new twist to the concept of genetic / inherited diseases !!

Similarly, an unredeemed Karma  that is destined to allow the embodied one to be a musician, shall prompt the Soul to be born to a musician so that right, conducive ambience and facilities are available right at the word GO so as to redeem the Karma  of becoming a musician. Then we take a grand-stand,” Oh ! Musician father, so musician son !!”

You might have come across families wherein suicidal tendencies are dominant. Same explanation is valid there too.

Owing to the mysterious cosmic sport of Karma-s, Molecular Sciences brushed it under the carpet of ignorance as GENETIC / INHERITED !! Theory of Genetic Inheritance propounded by Molecular Biologists is not entirely true. I would refrain from commenting on the wisdom of members of the Swedish Committee that awarded so many Nobel Prizes in this discipline of so-called research.

THERE IS ABSOLUTELY NOTHING LIKE GENETIC-DISEASE IN THE WORLD. NATURE OF YOUR MUTABLE / GROSS EXISTENCE IS DECIDED BY YOUR KARMA-S, NOT BY THE GENETIC CODE CONSTITUTED OF NUCLEIC ACIDS.

IT IS ENTIRELY KARMA’S GALORE. KARMA  IS IMPOSSIBLE TO BE INHERITED THROUGH GENETIC MATERIAL / GENETIC CODE.