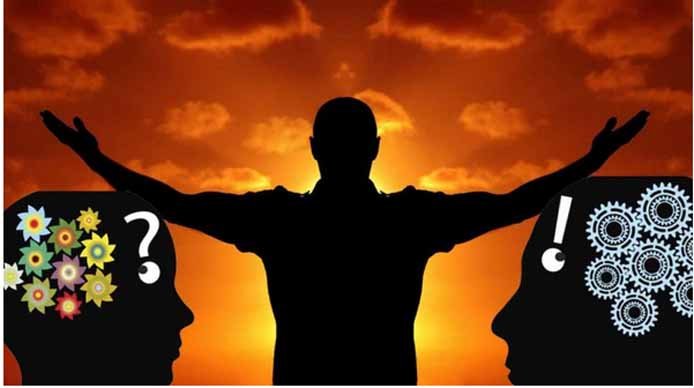 I do admit, intuition leads to spiritualism that is certainly wiser and conscious than the rationality which is cold, iron-clad logic. Real issue is, why rationality does not join intuition on it’s way to wisdom / pragmatism immediately after commencement of the journey by intuition ??? After all, dualism leads to monism; binomialism to ‘uninomialism’ then, why the cosmic law is defied by the rationality again and again ???

This had been / this is the tragic tale of monotheistic faiths i.e. faiths with only one God and holy book each. These faiths have been logically fuzzied, preaching highly mis-placed perceptions to the masses leading to utter religious chaos and oppression in the world. The chaos is reflected in their ferocious efforts to monopolise Bharatvarsa, then the whole world over.

Such faiths are so shallow that their respective societies have transformed themselves into wayward, promiscuous and brutal in almost every manner. Rational and spiritual vacuum are so severe that followers of such faiths are desparate to increase their numbers by any possible means, howsoever diabolical / outrageously inhuman that may be.

Sanatana Vedanta Darsana  is not only perfect in rationalism, but also complete and absolute in it’s Adhyatma  i.e. spiritualism. It counters and answers all the distortions / deficiencies of all other faiths that exist in the world without confronting them individually or collectively.

This is the only Darsana  in the world available to humanity wherein any seeker howsoever complex, can expect and attain spiritual / faith-satiation without undergoing any turmoil or violating norms / standards of human conduct. Owing to it’s complete unobtrusiveness, Swami Vivekananda unhesitatingly expounded it in America, amidst thunderous approbation from all corners of the audience.

When you perfect your head through flawlessly perfect rationality of Vedanta Darsana, you are led to a spirituality that is absolute and mellifluous. Then the intuitions are also perfect and realistic.