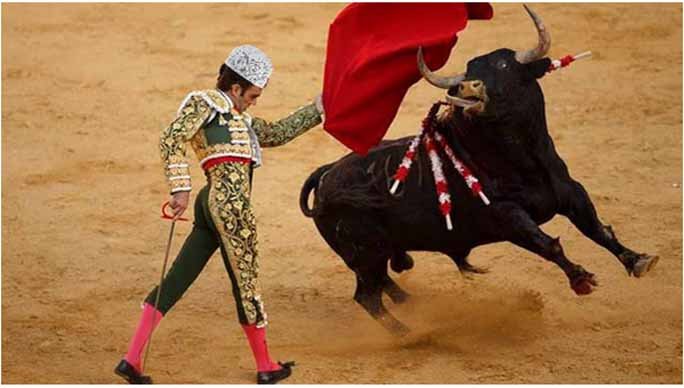 You know bull fights, of course. The bull is much bigger than the man but the man is craftier and armed, he kills the bull. Always.

It is a delayed killing where he plays with the bull, making it appear that he is giving the bull a chance. Yes, matadors also suffer damage, even die if the bull gets lucky quickly.

However, the moment the bull manages to make contact, trained professionals jump into the ring to save the matador; the bull has actually hit back in self defence but the Matador becomes the victim.

The game is played by Matador’s rules, the bull does not get to set the rules. In all or in short, the game is fatally loaded against the bull.

Why is the bull black in above pic? Because I did not get one where the bull was saffron. All other colours are retained and I feel they are pretty apt. The cap is added on for clarity and emphasis.

The bull loses because he cannot speak, he cannot give words to his pain and tell the world that he is actually the victim.

Perhaps every such bull is awaiting Lord Shiva and his Ganas to enter the fray and hurl the trident at his tormentors who have dragged him to a game whose rules they have set.

Was the bull causing any harm to the matador in his normal life?