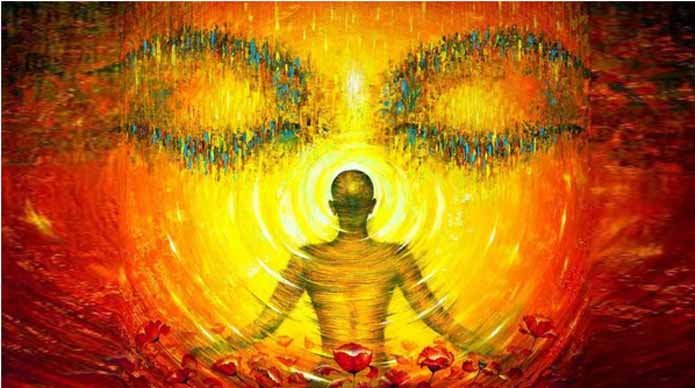 ‘PURUSA’ is absolutely conscious yet not indifferent, all encompassing yet not static i.e. ever expanding, inactive yet not inert, supreme cause of all yet not the effect, supreme time yet not the past, present or the future, supreme pivot yet not the pivot of relativity / reference… these binomial descriptions can be defined ceaselessly yet none of these are exhaustive in itself !!! HE IS JUST UNFATHOMABLY, CEASELESSLY & UNINTERRUPTEDLY MYSTERIOUS…

‘PRAKRTI’ is almost in all respects, diametrically opposite to ‘Purusa’.

We draw a pot-full of water from surging waves of an ocean, identify it, pour it back into the ocean at the same spot, then re-draw water from exactly the same spot in the same pot. Do we re-draw exactly the same water which we had drawn earlier ?? Obviously, not. We may continue repeating the steps again and again, same as well as at various spots anywhere in the world yet the re-drawal SHALL NEVER BE THE SAME AGAIN AS THE CORRESPONDING DRAWAL. That is the precisely the cosmic ‘modus operandi’ of creation and dissolution.

That’s precisely what is happening in the name of cosmic cycles. A certain pack of ‘Karma-‘ / ‘Prarabdha-‘ and ‘Samskara-s’ tagged with ‘Param Brahma’ emerges into gross existence as ‘Jivatma’, completes the mandated cosmic journey, then ‘poured’ back into the ocean of Absolute Consciousness. Self or the ‘Atma’ remains untainted and unscathed while all derivatives of ‘Prakrti’ tagged to the Self hitherto, merge into the larger, universal ‘Prakrti’. The same Self or ‘Param Brahma’ re-emerges into the gross existence with yet another pack of ‘Karma-‘ / ‘Prarabdha-‘ and ‘Samskara-s’ to move on with the cosmic-sojourn, re-starting from the cosmic-milestone where he had interrupted the journey earlier. The cycle continues till no pack of ‘Karma-‘ / ‘Prarabdha-‘ and ‘Samskara-s’ is left to be worked out. All experiences, their reminiscences, perceptions merge into the infinitely conscious / wise Purusa  turning Him into ‘more infinetly conscious and wiser’. Thus, He remains ever conscious of His own existence too, by continuously defining and re-defining His own Existence through Himself !!!

Like the pots of water drawn and re-drawn from the ocean, no two ‘Jivatma’-s can be the same or had ever been the same. No human being has ever been ‘repeated’ into this gross world. No creature has ever been ‘repeated’ into the world for that matter. Every creature is different owing to the innumerable cosmic-derivatives of Prakrti  yet they are identical at their core, that is Param Brahma  who is the infinite reservoir of experiences / perceptions gained through innumerable / infinite number of cosmic cycles undergone by ‘Jivatma’ through infinitely innumerable life-forms. Let’s now turn to the absolutely fundamental aspect of the Supreme Existence or any existence for that matter.

Certainly, no one can move on road with a frugal pack of just four wheels, one seat, one accelerator, one brake, one steering !! One certainly needs / deserves a complete automobile unit with all the necessary and so-called luxurious features to move around comfortably and safely. Similarly, three most fundamental aspects of the Absolute Supreme Consciousness exist as three Supreme Deities, complete in all respects, within themselves. They are the three SUBTLE EMBODIMENTS symbolising three most fundamental, most significant and most vital aspects of ‘Param Brahma’. These subtle embodiments of BRAHMA, VISNU  & SIVA  are grosser than the supreme and absolute ‘Param Brahma’ while infinitely subtler than the gross existence to which ‘Jivatma’ belongs.

These are finite too, if compared with ‘Param Brahma’. ‘BRAHMA’, ‘VISNU’ and ‘SIVA’ meditate upon the supreme and absolute ‘Param Brahma’ who is ‘entirely’ infinite and subtlest. As ‘BRAHMA’, ‘VISNU’ and ‘SIVA’ transform themselves into ‘SAKARA Param Brahma’, they meditate upon ‘NIRAKARA Param Brahma’ which turns out to be the most mystical cosmic phenomenon of ‘NIRAKARA’ meditating upon ‘NIRAKARA’ while maintaining the semblance of being ‘SAKARA’ !!! One may worship any one of them yet he / she shall ultimately report at the same ‘port of call’ i.e. ‘Param Brahma’. No one can perform more than one function out of the three viz. creation, sustenance and annihilation concurrently till he / she attains the ultimate point of his / her worthiness / excellence. Similarly, no devotee / worshipper can pursue more than one Deity out of these three to be attained to ‘Param Brahma’ successfully. Worshipping more than one Deity as one’s Ista  for the purpose of attaining ultimate salvation is altogether regressive in nature.

This is the rationale behind ‘TRIMURTI’ or the Trinity of Existence that is behind the diversity of the entire creativity.