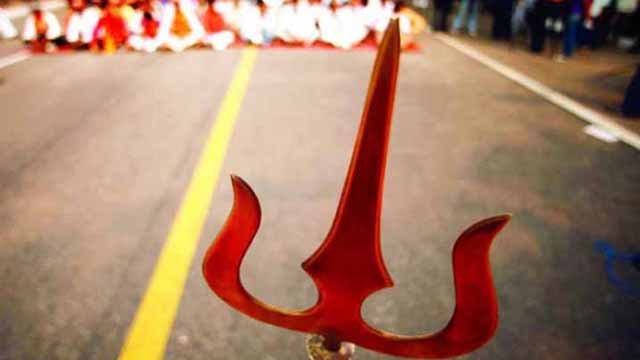 I have been often requested by friends/acquaintances to define Hinduism. However, I never took it seriously so far. Recently, a matter came up in Supreme Court wherein learned Justices admitted Hinduism as a complex issue, a life-style and what not. These observations are tangential, at best. Let me attempt to define Hinduism  and come to the assistance of all those who have been seized with the matter so far –
Hinduism  is as mystical as the Absolute Consciousness i.e. PARAM BRAHMA  Himself.

Just as every ‘Bhakta’ has his own take on the Absolute Divinity, so are the multitudinous definitions of Hinduism, individualised, customised and personalised.

Just as it is impossible to define PARAM BRAHMA  in a straight-jacketed manner, so is true with Hinduism  too.

Water is the basic constituent of every drink as there can be no drink without water, the base. Hinduism is the ‘water’ of every other faith / religion. Every Muslim, Jew, Hispanic, Buddhist, or Christian is essentially a Hindu. Even the Pastor in Florida who wanted to burn Koran in public few years ago, is a Hindu  !! So was Nadir Shah !! So was Robert Clive !!! Difference lies only in the range and content of the elemental constituent in their respective faiths…Hindu  content of their respective faiths / religions in proportion to other man-made additives and constituents.

Hinduism  is all inclusive like the Absolute Divinity, being Bhagirathi  of all rivulets / glaciers of all faiths / religions.

Only those privileged ones are profoundly qualified to offer precise definition of Hinduism  who have attained the pinnacle of Consciousness through Nirvikalpa-Samadhi – wherein the Cogniser, Cognised and the Cognisable merge into one entity, the Absolute Entity.

They do leave behind a moot question before us all – Will you ever come back to render definition of Hinduism  with absolute and precise exactitude ??

Will anyone else offer an improvised definition of Hinduism ??

I hope the conundrum faced by Supreme Court Justices would be resolved by now.

Now arises the issue of defining a Hindu.

Hindu  is the one who is incessantly conscious of proceeds of indulgence with Kama, Krodha, Lobha, Moha  and Ahamkara. And a Hindu  is constantly engaged in pursuits to subjugate and overpower these human frailties.