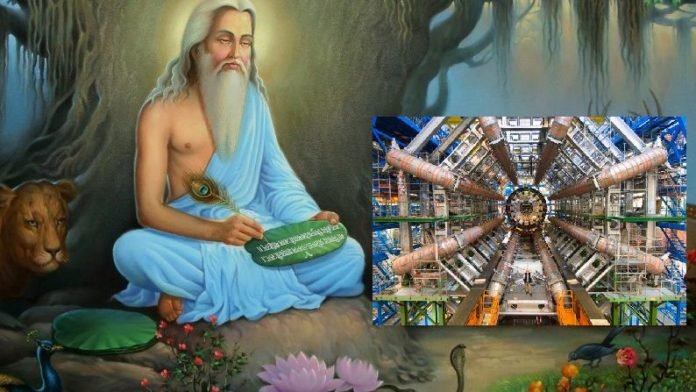 Few years ago, there is a grand announcement today regarding discovery of Higgs-Boson / God’s Particles, purported to be building blocks of the universe.

I smiled and enjoyed the euphoria that these highly-educated nincompoops have generated at a cost of billions of dollars, after devoting five decades in a 27 Km. long tunnel some 300 feet below the ground-surface in France / Switzerland. Number of such highly-educated ignorant ones is pretty large across the world.

I smiled at them because what they have discovered, has already been known to Bharatiya Maharsi-s for the last thousands of years or so!! What they have identified / discovered (if at all they have succeeded in real sense) had been established as MAHATATTVA, derivative of Prakrti  that splits into three TANMATRA-S of SATTVA, RAJA  and TAMA  subsequently, real building blocks of entire universe including living kingdom. Three Tanmatra-s equally proportionate, also known as GUNA-S, constitute the entire Space across the universe.

These facts are known to every scholar of Samkhyayoga / Samskrita !!! What is so great about their so-called grand discovery ??

Our Rsi-s and Maharsi-s were ACE PARTICLE PHYSICISTS !! Not only they knew the entire structure of universe, they also knew how to manipulate / fiddle with that. Such Siddha-s exist even now, there are in fact so many of them.

These poor chaps, supposed to be highly qualified scientists, splitting their heads over a NON-ISSUE !!! Only if they had accepted DIKSA  from an enlightened GURU, they too, would have discovered those Tanmatra-s at no cost, alongwith liberation / salvation too. POOR JESUS !!

Even Nobel Prizes would be raining on these fellows for their non-discovery !!!