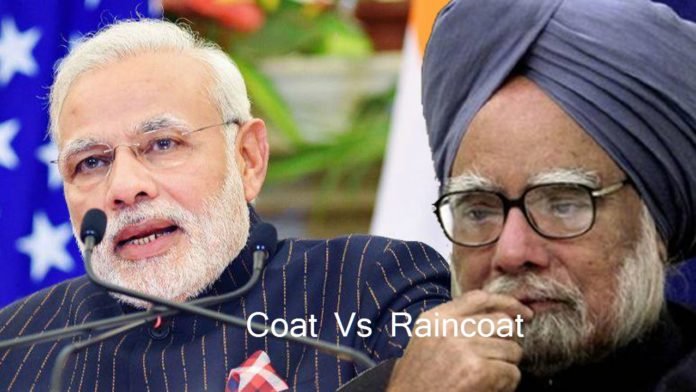 During Budget Session 2017 of Parliament, Prime Minister Modi responded to harsh, uncivilised criticism of demonetisation of high-denomination currency by ex-Prime Minister ManMohan Singh while speaking on Motion of Thanks to President. Counter response of Congress to PM Modi’s response had been ugly unruly. Author decided to pick up the gauntlet and respond publicly to shenanigans of Congress and their Nehru-Gandhi-Vadra dynasty.

Response of Congress to your raincoat jibe in Rajya Sabha has prompted me to write this ‘e-Brahmos’ to bring forth a few more perspectives of the issue to the conscience of all. More so because large number of people in the country have an intrinsic inclination to forget history and history is intrinsically inclined to immediately start crawling towards those who tend to forget / ignore it.

I have a few piercing questions that must be raised in public, on the floor of Parliament, in election speeches, in articles again and again till the reality is widely accepted, acknowledged and antagonists of reality are rendered silent.

Why is that only BJP’s Prime Minister is ordained to maintain dignity and decorum of the Office while all Opposition leaders including ex-Prime Minister enjoy unmitigated liberty to hurl abuses and derogatory comments ? They are the ones who continuously insulted Morarji Desai, Atalji, PVN Rao and Deva Gowda in past with the same alacrity.

Why do Congressis forget those lofty morals while commenting on every aspect of the Prime Minister including clothes that he wears ? Are they so much famished of genuine issues to talk about ?

What exactly / precisely was the contribution of JL Nehru to freedom movement without which the movement might have failed or gone haywire ? No historian / Congressi worth his / her salt, has been able to answer this question.

Since Congis ridicule Vinayak Savarkar, kindly ask them on the floor of Lok Sabha before the country, how many lashes JL Nehru received on his back from brute British-Goras and in which British Jail.

If Nehru was so instrumental in attainment of freedom, how is that he was not hanged to death by British-Occupiers, notorious for inflicting brutal / inhuman tortures on our freedom-fighters ?

Kindly ask Congis, as to how Chandra Shekhar Azad was surrounded by British Police shortly after his meeting JL Nehru in Allahabad, had to sacrifice himself instead of being caught.

Kindly ask Congis, what was the contribution of Motilal Nehru to freedom movement. Offering Ishrat Mahal turned Ananda Bhavan as a resort to Congis of those years to rest and relax with red wine and red meat ? What else ?

Kindly ask Mallikarjuna Khadge on the floor of Lok Sabha before the country, what was the contribution of Swarup Rani Nehru to freedom movement and why a hospital is named after her in Allahabad.

Kindly ask Ananda Sharma on the floor of Rajya Sabha before the country, what was the contribution of Kamala Nehru to freedom movement and why a hospital is named after her in Allahabad.

What was the sacrifice that Prime Minister Indira Gandhi (alias Maimuna Begum !!) committed for the country ? She was killed for brutalizing Punjab, for creating conditions to desecrate Golden Temple, for being responsible for brutal murder of thousands of Sikhs, for destroying at least two generations in Punjab…how can that be called a sacrifice when it was a nemesis that she richly deserved ? Kindly ask Congis on the floor of Rajya Sabha before the country.

Kindly ask Congis on the floor of Lok Sabha before the country, what was the sacrifice of Rajiv Gandhi to the country. He was killed for unnecessarily meddling in Sri Lankan affairs, tricked into deploying our Army by the cunning jackal that Sri Lankan President Jaywardene was, that led to immense blood-bath. Rajiv Gandhi was such a fool that he invited the ‘Kalank’ of killing Tamilians through our Army for a foreign Government !! When scores of dead bodies of IPKF soldiers rained down from Sri Lankan skies, it was amply clear, Rajiv Gandhi deserved to be blown into pieces and he was, at Chennai outskirts. Is that a sacrifice or a just nemesis ?

Kindly ask Sonia Gandhi on the floor of Lok Sabha before the country as to why they never glorified Feroze Gandhi. Just because he had a different DNA in spite of being a dubious Gandhi !!!

If they are in a position to tell the country, contribution of Priyanka Vadra’s children to country’s existence / advancement in future, they should be invited to do so immediately !!

Helium balloon of Nehru-Gandhi-Vadra Dynasty’s contribution to the country’s freedom movement must now be punctured, finally and forever.