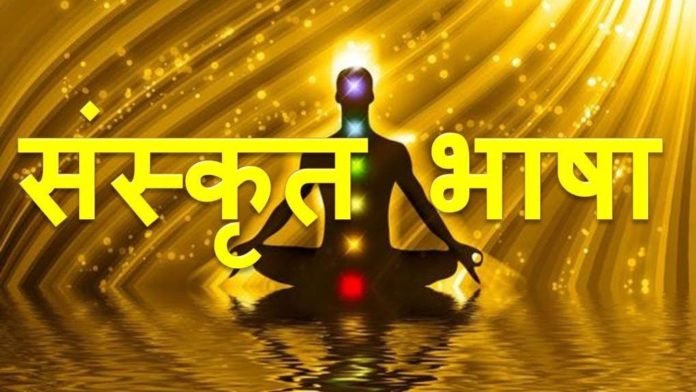 Samskrita  is very aptly called Devavani  i.e. ‘LANGUAGE OF DEVA-S’ or ‘LANGUAGE OF THE HEAVEN’ with it’s script in Devanagari  i.e. dwelling of deities. It was invoked and practised by those who were divinely serene endowed with the faculty of discriminative cognition.

This is one language which has NOT BEEN CREATED BY HUMAN BEINGS AT ALL !!! The ONLY one among languages in the world. This is one language which could not be destroyed by human beings, in spite of the combined, best efforts of all Secular Ayatollahs and Benedicts from all over the world. They simply ended up in lavishly admiring the language, it’s range, depth, divinity and it’s mysticism like the ill-intentioned missionary, Max Mueller.

This is one language which cannot be destroyed by any human being(s), irrespective of anything whatsoever.

The very word ‘Samskrita‘ means refined, consecrated, transformed. Samskrita  is an institution which has ever been constantly under transformation, refinement and enrichment.

It is so because all those who attained Absolute Wisdom through various spiritual pursuits, left their indelible mark on the language by contributing their own bit in Samskrita  only, be it poetry, music, drama, dance or any other discipline of knowledge. Samskrita  nourished their enlightenment then, Samskrita  itself was nourished and strengthened by their enlightenment.

Thus, Samskrita  became poetic, dramatic, musical, illuminating and mystical. All Sanatana  scriptures viz. Veda-s / Upanisad-s / Mahabharata  etc. are composed in Samskrita  only. Since words in Samskrita  are precisely imprecise, it allows considerable resilience to Sloka-s / Mantra-s / Sutra-s to be interpreted in various ways. 800 Dhatu-s in Samskrita  are similar to seeds of 800 gigantic trees with sprawling foliage of words and expressions !!! It is generally multidimensional with all meanings being independent of one another.

For instance, “RAM” means to be calm, to rest, to delight in, cause delight to, to love, to join, to please, to be blissed, to play, to be peaceful, to stand still, to cease, to come to a stop, divine and the absolute !!

Other languages have been undergoing transformation owing to scientific advances in linguistics. They are becoming precise and rational progressively albeit at the expense of innate liveliness and dynamism. On the contrary, Samskrita  has been mellifluous as ever like a melodious poem emanating from one’s heart and soul to register an impact on the heart and soul of others.

WHAT IS SO UNIQUE ABOUT THIS LANGUAGE ??

We all creatures are ‘Beings’ ‘enveloped’ within an ‘envelope’. This ‘envelope’ is the gross body, ‘enveloped’ is the subtle body and the ‘Beings’ are nothing but our innermost Self, the Soul. Gross body is constituted of five ‘Bhuta-s’ i.e. Prthvi (Earth), Jala (Water), Vayu (Wind), Agni (Fire) and finally Akasa (Space). These are the five elements that are fundamental in nature, constituting entire gross creation known to humanity. Subtle body is blueprint of the being, it’s past, present and future. It includes all it’s Karma-s too, and the roadmap to the ultimate salvation.

Seven Cakra-s are the SAHASRARA (on top of the head), AJNA (between eye-brows), VISUDDHA (centre of throat), ANAHATA (centre of chest), MANIPURAKA (just above navel), SVADHISTHANA (just below navel) and lastly, MULADHARA (just below the tail-bone). All features and components of the blueprint mentioned earlier, are neatly distributed among these seven Cakra-s with an amazing degree of finesse that is simply impossible without the divine intelligence.

VYAKARANA  i.e. Grammar of Samskrita  language was enunciated by Maharsi Panini, an inhabitant of Kandhar in Afghanistan, in an intensive state of trance attained through profound Dhyana (meditation), when he was in direct communion with the Supreme Existence. The Vyakarana, beyond the domain of human intellect, is so rich and intense that it mesmerises scholars of linguistics everywhere in the world.

As a natural corollary, we automatically arrive at the undermentioned conclusions, instantly –

Coming straight from the Supreme Entity, it is the only and the most fundamental language known for whatever is there in the name of existence.

All other languages of the world, past and present, existing as well as extinct including their grammar, are merely poor imitations / distortions of the prime and supreme one i.e. Samskrita,  in all respects.

As Dhvani  of the Samskrita Varnamala  is an integral constituent of our subtle body through seven Cakra-s, WE ALL EXIST THROUGH SAMSKRITA, IN SAMSKRITA  & WE ALL ARE MADE-UP OF SAMSKRITA !!!

That’s the reason, why it is ancient. As ancient as the universe itself !!!

Even the diehard Mullahs, Ayatollahs and Faith-Harvester Benedicts are also made-up of Samskrita, they exist in Samskrita  as they breathe Samskrita  in and out every moment, every day !!!

Do we need to prove any more, the supreme primacy, invincibility and indestructibility of the language that is Samskrita ???

I lost my glorious mother-tongue i.e. Samskrita  because I was educated as one among scores of McCaulay Putra-s in this country. I stand humiliated today for having lost my mother-tongue because of the abject leadership that the nation have been consigned to since 1947.

Yet I am determined to reclaim the glory of my past mother-tongue.

May I wish and pray, this pathetic state of affairs be addressed properly for the generations to come ???