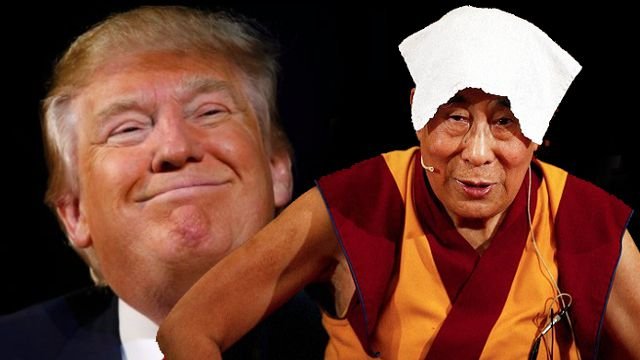 US President Donald Trump is now firmly in the saddle, resolutely on the path of honouring his pre-election promises after entering into the White House, has already extended an invitation to you to visit him later this year.

When Donald Trump responded to Bill O’Reilly of Fox News in response to his question about Russian President Putin, “You think our country’s so innocent ?”, I was finally convinced, Man In The Oval Office is grounded to realities of the world in addition to being a sane, rational thinking man.

This is the most opportune turning point when you can appeal to him to completely stop funding evangelism across the world, particularly in our country during your forthcoming visit to the White House.

It will certainly save his billions of US $ and protect so many countries from political / religious / cultural / ideological upheavals. Since President Trump genuinely believes in peaceful co-existence with mutual respect, so it appears, it should not be difficult to convince him on this murky issue and bring him around to the righteous stand-point.

In spite of running into the risk of sounding utterly naïve, I request you to raise the issue with him during your next summit with him in Washington DC. If he can be prevailed upon to appeal to Pope Francis to declare evangelism / conversions / proselytisation “HARAAM”, it shall be a historic achievement. Western $ sponsored conversion activities must stop immediately, diabolical / obnoxious missionaries must cease and desist from all such nefarious activities. Congress shall resist with all their might at command as destroying Hinduism and converting every Hindu happens to be their first mission, right since their incorporation by a British-Gora, AO Hume.

GHAR WAPASI must be raised to levels of a national mission on the lines of Swaccha Bharata Abhiyana / Beti Bachao, Beti Padhao. It must be encouraged through rehabilitation packages, financial support, security and legal cover. Islam and Christianity do not belong to the nation originally while Zorostrianism / Judaism have been like a breeze of fresh air wafting through windows of nation’s conscience without the possibility of being blown away from our ancient, historical roots.

His (So-called) Holiness Dalai Lama appears to have deteriorated over ravages of time and age. While speaking at the Vivekananda International Foundation, he ridiculed RK Mission for being “sleepy” and declined to utter the name of Swami Vivekananda !! He elaborately preached Ahimsa, Secularism to a highly accomplished audience and liberally proffered HINDI-CHINI BHAI BHAI that left the audience a bit irritated.

I was not extended an opportunity to ask him whether he had ever preached those two mis-used / much-maligned ideals in an Islamic country, say Pakistan / Bangladesh / Syria / Egypt… I was not allowed to ask him, how he could call himself 14th incarnation of 13th Dalai Lama when Buddhism flatly rejects existence of Atma and how he could manage to re-incarnate even without his / any Atma !!!!!!

14th Dalai Lama, a compulsive non-vegetarian “Buddhist” preaching Ahimsa, is no more interested in liberation of Tibet from Chinese occupation at all. All this “Monk” is aspiring for is ‘Article 370’ for Tibet under Communist regime of China to protect Tibetan culture / language…!!! And that too, while enjoying all comforts and protection in our country without ever stepping on Chinese soil ! It rattles my conscience as it sounds like King Of All Absurdities, Mr. Prime Minister.

If 14th Dalai Lama is no more inclined to even talk about liberation of Tibet from Chinese occupation, why should he be allowed to stay in the country any more at all and remain a permanent irritant in Sino-Bharata diplomatic relations ??? I appeal to you Mr. Prime Minister, this Dalai Lama must now be repatriated to China along with his entire entourage immediately and leverage his ouster from the country by improving Sino-Bharata relations amounting to a paradigm shift in Sino-Bharata foreign policy. That will be certainly much more fruitful than feeding these deadwoods and flogging a dead horse any more.