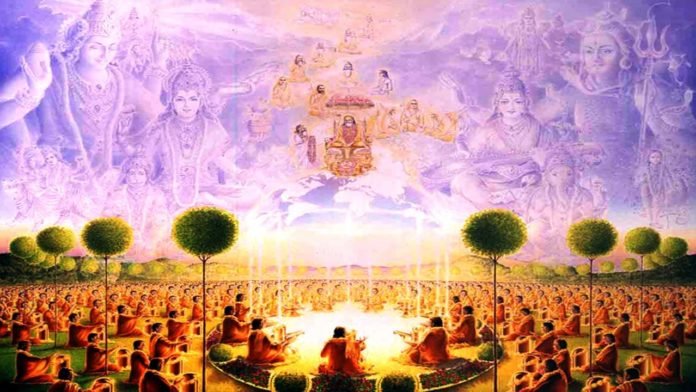 Yajna  was ordained by Prajapati Brahma  to be the foremost means to achieve whatever one wishes to during long-drawn process of cosmic creation. He declared Yajna  to be like Kamadhenu, to be pursued with unmitigated devotion invoking all faculties of one’s cognition and action. No other language has a perfect equivalent of the word of Yajna  as it carries within itself intense spiritual import and cosmic phenomena. It is generally understood as ‘sacrifice’ or offering of oblations into sacred fire in a Vedi  i.e. a platform raised for the purpose. Vedic  interpretation of Yajna  varies considerably. Root of the word Yajna  is Yaja  signifying congregation of four constituents –

Yajna  has been described in detail in various scriptures. Among these are Veda-s, Upanisad-s, Bhagavad Gita, Ramayana, Srimad Bhagavatama  and other Purana-s. Yajura Veda, regarded as Veda  of Yajna-s, qualifies it as Sthatmaya Karmana  implying “Yajna  is the most auspicious deed done for profound benefits for masses.” Creation of the universe is purported to be a proceed of Yajna  as expounded in Purusasukta  of Rgveda  and Srimadbhagvadgita (VIII / 3), “…by confining Himself in Prakrti, He solemsied Yajna  so that universe may come into existence.” During Vedic  era, Yajna  used to be enacted to consolidate co-existence, harmony and partaking with celestial deities. Yajna  is regarded as the very centre of universe, “ Yajnaha Bhuvanasya Nabhihi” as well as denoted as Nadabrahma, “Yajnena Vacahpadaviyamayana”.

Upanisad-s deal with the significance of Yajna  in various contexts. Kathopanisad  reveals Yajna  that enables an aspirant to experience heavenly bliss, highest mission of human life. Even miracles can be accomplished through prescribed Yajna-s.

Srimadbhagavad Gita  expounds Yajna  as the cosmic law of cause and effect in action. All actions excluding Yajna-s, cause bondage and Yajna  alone liberates from that. As enshrined in the wisdom of Gita, Yajna  is one of the Vibhuti-s of Param Brahma  if solemnized in the spirit of sacrifice selflessly.

Mahabharata  is replete with instances to establish, Yajna  was an essential errand for monarchs and emperors. In Santi Parva, numerous instances of Asvamedha Yajna  being solemnised have been described. Dusyanta  completed 100 Asvamedha Yajna-s, Bhagiratha  performed several more while Yudhishthira  too conducted that after being crowned as Cakravarty Samrata.

Ramayana  and Ramacaritamanas  depicted King Dasaratha  performing Putresti Yajna  counselled by Maharsi Vasistha. He was later blessed with four sons with the eldest being Sri Rama.

Ravana  was a great scholar who accumulated power, wealth and prosperity through Yajna-s. Demons were always engaged in desecrating Yajna-s being solemnised by sages. Meghanada  would have remained invincible had not Hanumana  desecrated and disrupted his Tantra Yajna. Sri Rama  too, organised Rajasuya Yajna  after He was crowned as the King.

Eighteen Mahapurana-s too, inspire all to perform Yajna-s. In Kurma Purana, Bali worshipped Visnu  through Yajna; in Narada Purana, Asvamedha Yajna  is performed by King Bahu  while Bhavisya Purana  mentions Rsi Cyavana  being propitiated by Asvini Kumara-s through Yajna. Subsequently in Purana-s, every selfless Karma  of piety dedicated to the deprived, was declared Yajna.

In ancient Bharata, Yajna  was an integral errand of everyday life. No householder accepted food without appeasing Agni  or other deities. Purana-s  too, extolled glory of Yajna.

Yajna  is the collective way to repay to nature that bestows upon us unrestricted abundance of all kinds with a sense of gratitude. Niskama Yajna  i.e. selfless / unattached Yajna  belongs to the highest order and it’s proceeds go all the way to restore cosmic equilibrium wherever and whenever disrupted. It involves offerings of specified organic substances as oblation into sacred Agni  accompanied by recitation of Mantra  and incessant devotion. Rhythmic recitation of Mantra-s causes specific Spandana  into atmosphere to engender aspired proceeds.

Sakama Yajna  is solemnised with a specific desire in mind as Samkalpa. However, Yajna  is not merely restricted to offering of oblations into Havana-Kunda  i.e. fire receptacle. It is a multifarious deed undertaken collectively. Broadly speaking, Nitya  and Naimittika  are the two types of Yajna-s out of which Nitya  is conducted daily while the other one, on specific occasions only. When Soma  is offered as oblation into Yajna-Agni, it brings about tremendous purifying / recuperative effect on atmosphere.

Agnihotra  is a Nitya-Yajna  solemnized at dawn and dusk, two important circadian biorhythms of Prakrti  and simplest form of Yajna.

Paka Yajna  wherein food is offered as oblation, is a daily ritual for householders; Havi Yajna  involves offering of non-food oblation into the sacred fire as sacrifice; Brahma Yajna  entails dedication of body, mind, emotions and wealth to Param Brahmatma;

Deva Yajna  involves offerings to various Deva-s like Siva, Indra, Varuna, Sakti; Pitri Yajna  calls for obeisance to be extended unto ancestors; Nri Yajna  is extending services to humanity and Bhuta Yajna  is about appeasement of species of lower orders.

Asvamedha Yajna  Asva  means horse, symbol of power and horse-power in contemporary context. These are undertaken to raise man-power for wars and calamities. Undisputed sovereign monarchs were qualified to conduct an Asvamedha Yajna  spanning two years. Royal horse symbolising sovereignty of the King, was sent to all kingdoms. Those who bowed to the sovereignty allowed the horse to pass through. Capturing the horse amounted to challenging sovereignty that led to fierce battles. If the horse returned unscathed, sovereignty of the monarch was established.

Rajasuya Yajna  was an integral constituent of the political and administrative system to establish as to who was entitled to govern a state. It was performed at various stages of governance to evaluate state policies and activities, complaints entertained and remedial measures undertaken. The Yajna  ensured close interactions between ruler and ruled.

Vajapeya Yajna  It was undertaken with the specific objective of preserving harmony within the state. It was essentially a conclave of erudite scholars, sages and spiritual mendicants to exchange views and perceptions on various contemporary issues leading to policy formulation and implementation.

Viswajita Yajna  The Yajna  was persued with the objective of unifying entire humanity into one single international community through love and compassion.