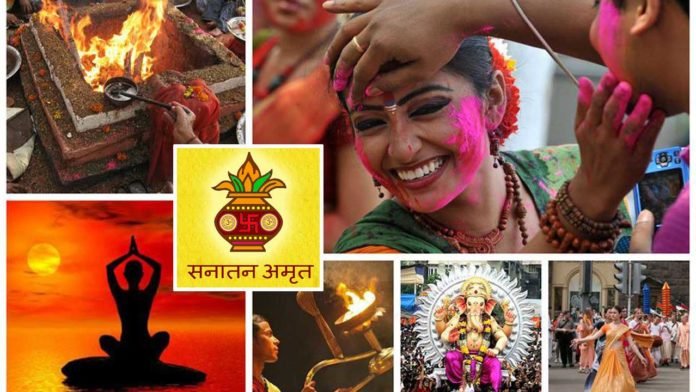 In the year 2005, I happened to stay at the Hotel Kenilworth, Kolikata and discovered Bible in the room. When questioned, the owner Raju Bharata explained it away as having been gifted FREE by the Bible Society, that all faiths are same… and all that related rubbish. It prompted me to elucidate as to why Sanatana  Scriptures, Darsana  are SUPREME.

I am impressed with your understanding of Gita and Bible !! However, your views require a little bit of precision-tuning.

Sri Krsna  was certainly born as a Sanatana Vedanti, now called Hindu. He certainly did not advise us to read Bible or Koran ! He was the Supreme Exponent of Sanatana  faith which is absolutely pure, crystal clear and mellifluous. If other faiths are Coke, Sprint or Pepsi, Sanatana Dharma  is the pellucid water, flowing eternally throughout the Existence. Sanatana Dharma  exists in all religions albeit muddied in others, due to several man-made additives / contaminants. This is the most fundamental faith, absolutely devoid of fundamentalism, without which no other faith can exist, just as you cannot have a drink without water.

It is improper to address Sri Krsna  as Lord. Lord is the product of our slavish attitude that so many of us are still carrying, whose roots lay in the era of foreign domination. What is preventing us to shed the reprehensible legacy even after 70 years of freedom? Every Brit / American still wants to be worshipped as the Lord of the world !!!

Jesus was not born as a Christian yet his teachings assumed contours of Christianity, that too with a missionary zeal. His followers took upon themselves to evengelise the world. I call it a criminal bend of mind when you coerce others to change their faith. It is a heinous crime against humanity to convert anyone’s faith by any means. They do not accept existence or prosperity of other faiths. Same applies to Islam too, with a greater degree of intolerance and violence.

Wisdom of Vedanta  is the purest one of all faiths. This is the TRUTH that does not require anyone’s authentication. When Christians and Muslims decide to convert us, that is where the problem arises. Their mission to convert us is the deadliest BOMB that you referred to. Still reprehensible is to decline the harsh reality and readily embrace Secularism instead, so that they can do their nefarious job unhindered !!! Why don’t they secularise their own countries?

Secularism is IMPOSSIBLE to practise. It is a romantic nightmare like Communism that is certainly destined to vanish. Those who harp on secularism are one of the most faithful ones. A follower of Sanatana Dharma  can NEVER be a fanatic. Whatever you have been observing in the name of so-called Hindu fundamentalism, is nothing but natural reaction to the nefarious designs of Christians and Muslims. Every Hindu deity blesses with one hand while slays with the other when principles of Dharma  are violated.

We did not inform our ego that our Dharma  is the best. Pursuit of Christianity has left more than 70% so-called Whites (they are colourless, indeed !) / Blacks illegitimately born alongwith a plethora of highly pathological, social problems that are destroying them gradually. About Islam, less said the better.

They stand condemned with their own doings. And we stand vindicated owing to the faith and culture. Religion divides while Vedanta  unites. Sanatana Vedanta  is the only perception that unites while all others divide. Vedanta  is not a religion at all while Christianity, Islam and Judaism are.

We had earlier taught the world. Time has come to preach them again. At the same time, we need to preach ourselves too, albeit discriminatively. Nobody enjoys the right to tell us to follow his Bible / Koran when we have been blessed with Veda-s / Upanishada-s / Bhagvadgita. This is the message that must reverberate all corners of the world now, with certitude.

Hundreds of verses are available to support realities stated herein. If you still maintain any doubt, you are welcome to meet me to talk it over.

Yesterday, Shri Kaushik Ghosh called to apologise for the faux-pas committed during my stay at your hotel. I am impressed by the response and assure you to patronize Kenilworth whenever I am in Kolikata or Goa.