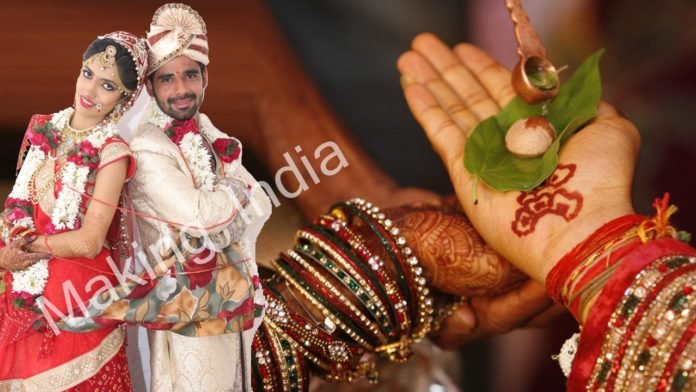 Some may not find it necessary at all. They may just laugh it away !!

We have tales of unshakeable / unbreakable betrothal oaths narrated vividly in Purana-s and these have been a source of inspiration as well as motivation to regard matrimonial oaths sacrosanct and inviolable. Narratives of Apala, Savitri, Gargi  and Virangana Laxmibai  of Jhansi are really commendable, Yashodaben in 21st century…more in glorifying and sanctifying feminine greatness rather than inviolability of those oaths administered to them during their wedding ceremonies.

Boys and girls used to be intensely groomed and culture-ised, first by their parents at home then at Gurukula-s by highly venerable and erudite Guru-s. These broad-spectrum, intensive educational lessons and grooming used to be so deep-rooted that rarely anyone ever even thought of violating them at all.

Equations between spouses used to be so well-harmonised and synchronised that terms like ‘separation’ were completely unknown and inconceivable. When separation was unknown, divorces too were a rarity. Marriages were long-lasting rather permanent within confines of human longevity.

If divorces were rarest of rare, almost entire credit went to the extensive educational grooming imparted in their initial years as none would violate canons of conduct within matrimonial domain rather than submission / subjugation of women or high-handedness of their male spouses.

McCaulay Phenomenon destroyed seven and a half lakhs Gurukula-s in the country, society was brought under tremendous pressure of survival, social values / equations disrupted and western ethos imposed upon us deviously.

Initial years of educational grooming disappeared, values blown to winds and people gradually turned selfish and individualistic in their disposition. With such a monumental paradigm shift in individual disposition and social scenario, incidence of friction, attrition between spouses rose to alarming levels. Then came into existence, ‘separation’, ‘divorce by mutual consent’, litigation over terms of settlement of legacy etc.

First sufferers are always children who never accept that bitter reality and never thereafter being able to respect the relationship of marriage. Divorce is a family destroyer, then society destroyer and finally, nation destroyer.

It may be almost impossible now to re-establish seven and a half lakh Gurukula-s to reverse the clock back. Gurukula  education is the only permanent / long-term solution to the rising social menace of divorces and all other related consequences albeit very difficult to re-attain that even in distant future while measures are required urgently to stem the rot.

Since so-called modern generation of youth patronise, glorify western culture (or lack of it !), disbelieve heroism of great Hindu  womanhood of yesteryears under the nefarious influence of Christian missionaries, let us begin with a western tale of no divorce picked up from December 1998 issue of the Reader’s Digest.

While competing in an equestrian event, hero of superman movies Christopher Reeva was thrown off and landed head down of hard earth in May 1995. Within seconds, he was paralysed from neck down unable even to breathe on his own. While he opted to call it quits and die, his wife Dana declined the proposition and vowed to look after him till death do them apart.

And the marriage survived albeit at the cost of enormous sufferings for both. Now in this instance, almost entire credit goes to the woman’s greatness and certainly not to western values they had imbibed all those years of their lives !! A fine example of revealing the axiom that marriage is not a 50:50 proposition but 100:100 each, goes beyond an iota of doubt !!

Egoic selfishness is the core element of human frailties. Deliberate disregard of others including family members is a severe aberration wherein personal interest is paramount even at the expense of others.

Disregarding one’s personal interest and consistent expression of commitment, constitute bedrock of every conjugal stability as well as longevity. Old-fashioned “Wives should submit to their husbands” practice is borne out of the fact that no organisation can function smoothly under stewardship of two heads with conditionalities of mutual respect and consideration imposed invariably !!

Perfect man / woman is the one who has conquered Kama, Krodha, Lobha, Moha  and Ahamkara  and such persons are absolutely autonomous creatures, do not require anyone else for any complimentarity whatsoever at all. What a devious dream is a perfect marriage !! So when Isvara  binds two Souls for life, He expects them to strengthen each other in all their endeavours, rest on each other in sorrows and minister to each other through all their agonies, constantly communicate to dissolve all wrinkles and patches free from grudges and malice, till death do them apart.

One Samantha Joel who studied Psychology at the University of Toronto, developed 10 Promises to be read aloud by both, bride and her beau at their historic moment of betrothal, based on ‘scientific research’ so she claimed. Another set of matrimonial vows was published by the Scientific American too !! And a ‘scientific study’ was conducted in west to discover, how precisely wedding size and cost incurred affected longevity of marriage !!!

Crazy west, isn’t it ? Not really. They too, are desperate to prolong life of every marriage as high incidence of divorces, more than 50% have ruined them, children are never sure whether they would be there with their parents next day, no one is sure when his / her spouse would suddenly walk out of the relationship. They all suffer from an intense fear of being deserted alone again and again in this very very tough world to dwell in and that leads them to indulge in all sorts of frivolities. Let us glance at the ‘research based’ matrimonial vows published in a research journal by her –

“I promise to respect, admire and appreciate you for who you are, as well as for the person you wish to become…

I promise to support and protect your freedom  because although our lives are intertwined, your choices are still yours alone…

I promise to seek a deep understanding of your wishes, your fears and your dreams…

I promise to always strive to meet your needs, not out of obligation but because it delights me to see you happy…

I promise to nurture your goals and ambitions; to support you through misfortune and to celebrate your triumphs…

I promise to keep our lives exciting, adventurous and full of passion…

I promise to persevere when times get tough, knowing that any challenges we might face, we will conquer them together…

I promise to show you, every day, that I know exactly how lucky I am to have you in my life.”

Well done Samantha Joel ! However, are these not really vows and much more than these that Hindu  brides / bridegrooms swear by while performing ‘Parikrama’ around Agni-Kunda  conducted by Pujari-s / Purohita-s ? What new has she really discovered or enunciated ?? Katherine Hertlein, Professor of Marriage and Family Therapy (they have such disciplines of study too !) at the University of Nevada in USA established through extensive research, ‘certain level of egalitarianism’ in relationship is healthy !!!!!! And small budget weddings are short-lived while big-budget, a little longer !!! Classical Western Intellectual Bankruptcy appears to be Infinite indeed.

Revert to your original moorings of Sanatana Vedic  culture and be a masterpiece of humanity. Rest shall follow you naturally, without even your rigorous efforts.