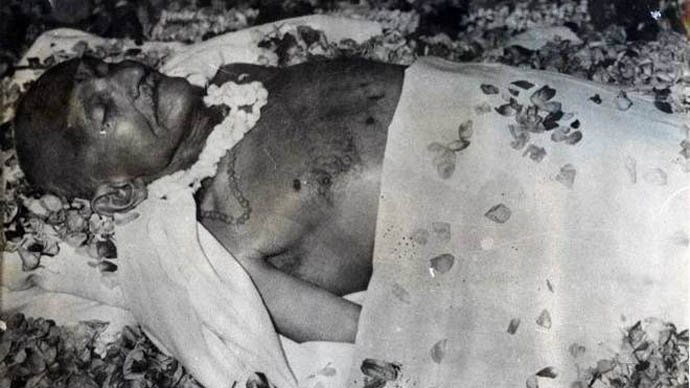 I am no follower of Godse and no hater of Gandhi (though mild forms of such feelings come and go quiet often), but I can boast of one thing, having read and discussed Gandhian philosophy with many of learned modern Gandhians personally, I could not get answers to the most basic of questions people ask against non violence and tackling terrorists, enemies of state, traitors, barbaric monsters such as maoists etc. with the help of this philosophy.

While I do not write off non violence completely, I hate this bigotry of considering it as “ultimate truth” and attempts to ensure differing voices considered untouchables.

I hate this monopolist tendency of ridiculing ideological opponents of this philosophy by terming them bloodthirsty.

In contemporary politics, this tendency has further rotten down to opposing Armed forces and their operations against terrorists, supporting terrorists in the name of human rights, opposing governments move to tackle cross border terrorism, rebutting ceasefire violation at border etc.

These propagandas clearly are anti national in nature and mostly triggered by foreign funding, enriched by JNU brand intellectuals and presented to people at large via candle marching NGOs and “krantikari” news channels in the subtlest of forms.

After the rise of Modi on Indian political horizon, these forces have united and resorted to their last battle of survival in the form of a political party called Aam Aadmi party (could be termed as noblest of modus operandi of these forces) who boast of carrying all the anti nationals, maoists, separatists along with them, who shy away from calling Mohanchand Sharma a Martyr, who shy away from telling us their Pakistan policy, how would they want terrorist be tackled etc?

Needless to say, Gandhian philosophy traditionally has been used as a proxy for all such anti India forces while true Gandhians either do not exist or are playing in the hands of the same foreign funded forces in the garb of being non violent secular angels saving the very Idea of India and its superfine secular fabric.