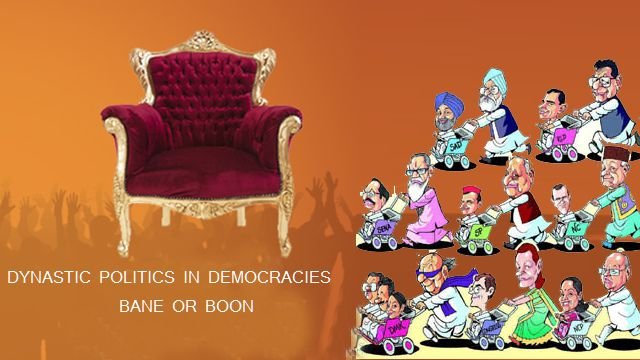 Whether dynastic, feudalistic politics has been largely responsible for dragging the nation backward and downward is a mind-boggling issue which must be intensely examined lest it continues languishing in the domain of frivolous allegations and counter-allegations. Political dynasties have been a reality, be that in the benign State of Bihar, South Block in New Delhi or the White House in Washington DC with Bush / Clinton dynasties etc. Even a relatively cool and silent country like Canada appears to be catching up with Justine Trudeau as their youngest Prime Minister, son of ex-PM Pierre Trudeau.

Most prominent Bharatiya  political dynasty has been Nehru-Gandhis. Why is that Nehru-Gandhi dynasty that ruled over the nation for more than six decades, miserably failed to transform the nation into a superpower while Japan / Germany rose rapidly to become highly advanced countries within a span of just two decades in spite of their being completely destroyed in World War II and Japan having undergone the terrible catastrophe of two nuclear strikes by America ??

One does not need to be a genius of Albert Einstein to proffer the theory of Nehru-Gandhis deliberately pushing the country backward so as to nurture their vote-treasury and cling to power eternally, generation after generations. Nehru and two Gandhis ruled over the country for 37 out of first 42 years of post-1947 independence and authored one of the worst economic calamities, that too in a highly talented and gifted nation blessed with enormous natural resources.

JL Nehru being a Communist by disposition, was obsessed with Soviet brand of restrictive economy designed through the instrument of five-year planning conspired in the building of Planning Commission instead of free enterprise, unrestricted entrepreneurship, civil liberty for individual talent to blossom, human rights to prosperity and affluence. He packed Planning Commission with Left leaning economists who intentionally stymied country’s growth rate at 4%, then moved around the world and ridiculed it as ‘Hindu  Rate of Growth’!!

Those were the so-called economists who were showered with Padma-Bhushans and -Vibhushans. It was not that nobody in that era whistled and warned him to the effect that he was walking down the inglorious path of penury, misery, destruction and disintegration. Nobel Laureate in Economics Milton Friedman and BR Shenoy raised hue and cry that were promptly conveyed to him in no uncertain terms.

But the infatuation of his obsession with the bankrupt economic ideology did not allow him to open his eyes and ears. He preferred to idolize discredited development models of Gunnar Myrdal and Arthur Lewis. Or may be he had planned it that way, how not to allow the nation to rise to lost glory of prosperity and well-being !!!

Worse than Nehru was his daughter Indira Gandhi, vindictive and venomous Prime Minister that Bharata has known so far. She multipled her father’s dubious legacy through ‘Garibi Hatao’ sloganeering, then imposing maximum income tax rate at 97% coupled with dismantling all august Constitutional bodies with her own hands to perpetuate her dynasty and cling to office most brazenly even after her Parliamentary election was held null and void.

If economic measures that were undertaken in 1991 had been out of sheer penance, out of sheer conviction, it would have been one of the most remarkable turnaround chapters of nation’s history. It is not so in spite of economic benefits that accrued because those reforms were undertaken out of sheer compulsion, with our back to the wall, nowhere else to go and absolutely nothing else to do. Poverty began going down gradually as those measures allowed the country to breathe afresh, hand and feet untied, allowed to sprint and gallop for the first time in history.

With one-fifth population below poverty line, nation is now poised to obliterate poverty altogether and forever. It is so paradoxical and ironical to behold, the dynasty believes or pretends to believe, long years of disastrous miseries and agonies were in fact springboard to initiate those reforms into prosperity instead of owning the inglorious past in a somber, pensive mood, deifying Prime Minister Rao into ‘Mahatma’ and apologising for what they did to the nation intentionally or otherwise.

It shall make an interesting case study in management classes across the country as to how ManMohan Singh acted so boldly as PM Rao’s Finance Minister and all the dynamism disappeared into thin air, anti-national corruption of monumental dimensions / implications creeped into Government when he headed as Prime Minister under UPA’s Chairpersonship of yet another Gandhi, albeit of naturalized variety.

By raising a huge mountain of reckless / thoughtless / unmonitored subsidies with unmitigated debasement of nation’s economy ruined his entire political capital that he had earned earlier painstakingly and retired as a sulking, grieving and languishing ex-Head of the State consigned to dustbin of history. While subsidies to the tune of 9% of GDP were frittered away by the dynasty, the figure was merely 5% during non-dynasty regimes. If the dynasty raised subsidies by 13% year on year basis, non-dynasts did so by 4% on the same scale of measurement.

Similarly expenses grew at the rate of 9% under dynasty rule, it was mere 5% under non-dynasts. Central Government debts and cash deficits have been always been double of what non-dynasty regimes maintained. Even on parameters like growth in hospitals / schools, infrastructure construction, utilization of MPLAD funds or even Parliamentary attendance, dynasts faired conspicuously poorly.

Thus the dynasty had no qualms in raising indebtedness of generations to come by wasting national income and surpluses. Doles and largesse with open leakages were in reality meant for silencing their own cadres into submission and obedience, thereafter subjugating poor, famished,  struggling to survive masses to gladly become vote making machines. Subsidies not only created economic whirlpools but also destroyed precious entrepreneurship individually.

Youngest Gandhi does not appear to have metamorphosed from state of being a tadpole and he still remains, a tadpole though he is past prime of his life in terms of evolutionary advancement. The horrible display of his Leninism in scuttling Vedanta Group’s two Billion US $ Bauxite mining project in Odisha shocked all those who understood the ‘Idea of India’ capable of galloping like Cetaka  raining wealth and prosperity over famished / malnourished for generations of poor inhabitants of Odisha.

His preoccupations with inequality bordering grossest form of immaturity was in reality, nurtured by his own dynasty !! He revealed his utter lack of understanding of the ‘Grand Narrative of Bharata’ when he told US Ambassador Timothy Reamer that ‘India is threatened more by Hindu  fundamentalists’ than Islamic terrorists. Such a ludicrous statement coming from the scion of Gandhi dynasty lucidly explains, root-cause of all social / economic tensions that tormented the nation all these decades.

Now with sagging fortunes and desertions by old stalwarts, dynasty has been forced to mull over drafting next one, a Gandhi turned Vadra, who has harnessed obsequious media into projecting her as Gandhi only and not at all as Gandhi Vadra or strictly Vadra. And to provide her strength from one step behind, she is blessed with a possible “Mr. 10%” too, interesting replay of Bhutto dynasty in Pakistani politics.