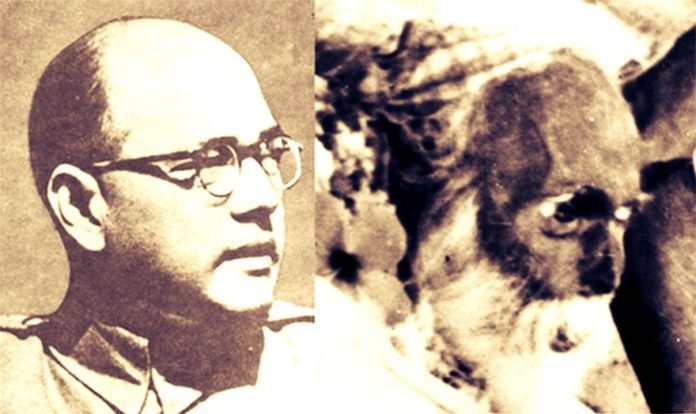 It happens to be the greatest mystery of post-1947 Bharata. Did Netaji  Subhash Chandra Bose really die in a air-crash in Taiwan or he survived ? There is every possibility that he survived and lived his full life as an ascetic.

Bhagavanji  was an ascetic in Neemsar at Ayodhya  with a dazzling bright face and very few knew who he was in reality. He was pronounced dead in an air-crash in Taiwan and hardly anyone in Bharata  believed that official version.

He was first identified and contacted in 1962 by Surajit Dasgupta, a close acquaintance of SC Bose, his elder brother who had delegated him with the mission to search him out from nowhere. He seldom used to meet anyone that too, with his face hidden behind a curtain. An outstanding personality that he was, used to discuss world politics, theology, music and even metaphysics.

He was always inclined to be a rapt listener, used to write notes on important points, prognosticated disintegration of the then USSR, the mess of Vietnam war America was dragged into by US President Lyndon Johnson, demise of Communism in the country of it’s birth etc.

He avidly followed Bangladesh liberation war and it is believed, he passed on very crucial strategic insights to the then Government that facilitated victory. One of the greatest patriots of Bharata, he had a flowing beard, extremely thinned hair, exactly same face with very powerful, sparkling eyes. Some say, the afflatus surrounding his face was so intense that it was difficult to stare at him.

He had become an advanced Yogi  by then, entirely satisfied with life in solitude. Jnani  Gurujeet Singh Khalsa, Chief Granthi of Gurudwara Brahmakunda Sahib  overlooking Saryu  river, recounted similar experience when he beheld Bhagavanji’s face, face to face, “I was a 17 year old when I saw him. The radiance on his face was astounding.

It cannot be explained in words.” There was another close confidant Bijoy Nag who had met him some 14 times between 1970 and 1985 and declared every rendezvous memorable when he stayed in Purani Bastee, then Brahmakunda  for a few months in 1975 / 76. Bhagavanji  once demanded photographs of parents of Netaji  Bose and those were provided to him in due course. Dasgupta and Nag were unshakeable in their conviction about Bhagavanji  being Netaji  Bose.

An INA secret service agent PM Roy had broken the news of his presence in an abandoned Siva  Temple at Neemsar in Dec. 1962. The news was also secretly conveyed to historian RC Majumdar and on Aug. 28, 1962 a letter was sent to Prime Minister Nehru stating, “Netaji  is alive and is engaged in spiritual practice somewhere in India… From the talks I had with him, I could understand that he is yet regarded as enemy no. 1 of Allied powers and that there is a secret protocol that binds the Indian Government to deliver him to Allied justice if found alive. If you can assure me otherwise, I may try to persuade him to return to open life.”

Nehru denied existence of any such protocol in his letter dated Aug. 31, 1962 which was a bundle of lies. Transfer Of Power Agreement 1947 was very much signed by JL Nehru and Viceroy Mountbatten, runs into 20 volumes, mandates Government of India to follow same laws and practices even after exit of British Occupiers. These volumes were once displayed by Swami Ramdeva  live on Astha and Samskara  Channels and a lecture delivered by his late associate Rajiv Dixit. Nehru had in fact, stabbed in the back of this nation on the eve of independence and assured Winston Churchill later in London, India had no rancour against British colonials at all !!

Netaji’s friends cited documents referred to in the ‘Transfer of Power, Vol-VI’ that explicitly states that British Government knew of the existence of Netaji  after Aug. 18, 1945 and a confidential letter from Mudie, Home Member of Viceroy’s Executive Council to Jenkins dated Aug. 23, 1945 revealed that after the so-called air-crash, they were mulling over a decision on treatment of Bose as a war criminal and possible fall out of that. In Case no. 929 of 1986 filed by Netaji’s niece Lalita Bose, Justices DP Singh and VK Dixit observed that during search of Bhagavanji’s house, “a large number of belongings and literature associated with the INA in general and SC Bose in particular came to light.

There were a large number of family photographs, reports of inquiry commission related to the death of Netaji  etc. it also transpired that a special ceremony used to be held in the room of Bhagavanji  each Jan. 23rd which incidentally, is the birthday of Netaji  Bose and that on that day, no person from Faizabad was allowed to visit him. Some persons from Kolkata used to come and stay with him for that day.” From Nov. 1983 till his demise on Sep. 16, 1985, Bhagavanji stayed at Ram Bhavan on Faizabad-Ayodhya  Highway, close to Circuit House. All those fortunate few who met him, were convinced, he was a Yogi  blessed with divine capabilities. One Saraswati Shukla used to look after him round the clock and Bhagavanji  always addressed her as ‘Jagadambe’. Lalita Bose identified all his belongings as Netaji’s, petitioned court to intervene to take into custody all his 2,760 articles by UP Government and kept in Faizabad Treasury, packed in 32 trunks.

Bhagavanji  talked in detail about his escape to the USSR via Diren in Manchuria after the sham of air-crash in Taiwan and life in Siberian prisons. Once, upon being offered a firepot to warm himself on a winter night by one Panda  Ram Kishora, Bhagavanji  or Gumnami Baba  told him, his body had lived and survived in Siberia hence, he did not need anything to warm himself up !!

Bhagavanji  had complete knowledge of all details of his interactions with those on his trail till his disappearance from his Elgin Road residence on Jan. 16, 1941. Details that he exchanged through emissaries of Lila Roy during his stay at various locations in Ayodhya  were quite privileged to Netaji  Bose alone and some of them deposed before Mukherjee Commission accordingly which had concluded finally in their report, Netaji  did not die in the air-crash on Aug. 18, 1945. From 1955 to 1985, he stayed at ten locations in Ayodhya  camouflaged as wanderings of a Yogi. Mukherjee Commission even discovered that there was no air-crash on that day in Taiwan at all and ashes preserved at Renkoji Temple in Japan belonged to a Japanese and not Netaji  Bose. Their report stated categorically, “Apparently there is no reason for not acting or relying upon the evidence of witnesses, particularly those who had seen Netaji  before 1945 and also met Bhagavanji  or Gumnami Baba  face to face, more so when their evidence regarding frequent visits of some freedom fighters and some politicians and former members of INA on January 23 and during the Durga Puja  is supported by the fact that letters written by them… were found in Ram Bhavan, Faizabad…”. He had stayed at Gurudvara Brahmakunda  for six months where Army, Police and senior Administration officials used to meet him at night clandestinely after 11 pm invariably in black Ambassador cars, as averred by Jnani  Khalsa. One of his kin Lila Roy confirmed to Dilip Roy, an old friend of Netaji  through a letter to the effect that Netaji  was alive.

All his daily necessities, financial requirements were met by Lila Roy from 1963 till her death in 1970 through trusted emissaries. Bhagavanji  relished some of Bengali dishes like Ghonto, Sukto, Keema, Mishti Doi etc. Her demise in 1970 was a traumatic blow to Netaji  and he admitted so in a hand-written letter which was later examined by a handwriting expert who confirmed that to be exact match of original handwriting of Netaji. Emphatic deposition of all those who had interacted with Bhagavanji  before the Commission, was an evidence credible and trustworthy. When his sketch was prepared by an artist based on details provided by some children who used to play in the compound of Ram Bhavan, everyone was stunned to see exact replica of Netaji  Bose. Even MK Gandhi asserted in Jan. 1946 that Netaji  was alive and he would appear at an opportune moment. PM Nehru was understood to have received a letter from him from USSR stating he would escape to Bharata  vis Chitral. UP Government developed a museum at Faizabad to preserve and display all those articles used by Bhagavanji  who in all probability appeared to be none other than Netaji  Bose. Lucknow Bench of Allahabad High Court ordered UP Government to set up a committee of experts under a retired HC Justice to ascertain real identity of the ascetic popularly known as Bhagavanji, cremated on Aug. 18, 1985 in Faizabad.

With assistance of Japanese, Netaji  had launched Indian National Army in 1943 in Singapore while British were growing desperate to eliminate him at any cost, by all means. The then British Prime Minister Winston Churchill had constituted Special Operations Executive to assassinate Netaji  Bose earliest possible in Turkey where he was scheduled to visit.

Netaji  got wind of the conspiracy, abandoned plan to go to Turkey, landed in Berlin via USSR and foiled British plans to eliminate him. British exerted themselves to sow seeds of suspicion in Soviet minds against Netaji  Bose as they considered him a serious threat to their occupation of Bharata. He expected USSR to assist him in liberating the country given their anti-imperialist credentials after the end of World War II. As bad luck would have it, Netaji  Bose fell to British planted mis-information about him in Soviet minds, was sent to Gulag. As Netaji  had no lobby in Kremlin to speak in his favour to Russian dictator Joseph Stalin, he had to remain imprisoned for sometime. Stalin suspected Gandhi-Nehru being British stooges, had poor opinion about MK Gandhi and other leaders, accepted the advice of Russian Intelligence not to kill Netaji  as he may be a better option to carry along than Gandhi-Nehru while dealing with imperialist powers. Stalin’s perception of Congress leaders was so poor that he even declined to send condolence message on Gandhi’s death !! Why and under what circumstances Netaji  Bose was released alive, is yet to be de-mystified.

When he expired and cremated in Sept. 16, 1985 in Faizabad, rumour mill became active to the effect that the Gumnami Baba  was indeed, Netaji  Subhash Chandra Bose. A full-fledged sovereign republic of Bharata  was unable to bid the greatest freedom warrier an honourable ‘Namana’ solely owing to the devious, back-stabbing Agreement that PM Nehru had signed with the British regime on the run and severely compromised dignity, honour of the nation.

Note : Facts stated in the article have been gleaned from details available in public domain and not based on any investigation into the imbroglio carried out personally by the author. Comments and observations are author’s personal.