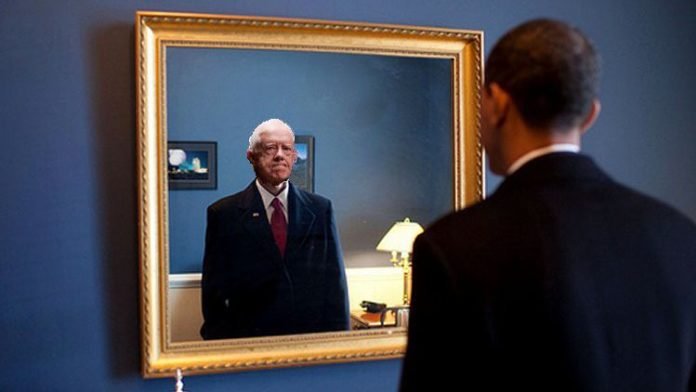 “Yes, We Can” was an abbreviation of “Change We Can Believe In” with which Barack Hussein Obama stormed into the White House located at Washington DC with the bang of “Nobel Peace Prize In Anticipation”, quite a strange variety of Nobel Accolade probably meant to motivate him perpetually with the Medallion lying on the mantelpiece of his White House Drawing Room !!

And he demitted Office at the end of his II term in 2017, precisely on Jan. 20 with a whimper of “Hey, I Could Not” and led the way for an assertive, tough and uncompromising Donald Trump, symbolising irruption of conservative nationalism among Americans as proceed of years of his unenviable track record of performance from the Oval Office. With Mitchell as his shadow, he conducted his Presidential years in such a way that world became desperate for Jan. 20, 2017 to arrive much before the due date !!! Prime Minister Narendra Modi had been aggressively smart enough to extract maximum wide-ranging benefits for the country out of his Presidency under a psychological siege.

Not really very long ago, “Why Not The Best” happened to be the catchy slogan of 39th US President James Earl Carter, elected in 1977, installed in 1978 in the Oval Office, better known as Jimmy Carter, had successfully fooled Americans and stormed into the same elegant White House for a single four year term from Jan. 20, 1978.

By the time he relinquished the Oval Office, rather forced to relinquish after a humiliating defeat at the hands of an assertive, conservative nationalist Republican Ronald Reagan, Russian Bears had captured Afghanistan after a heavy blood-bath deriving maximum advantage out of his emaciated, lame-duck foreign policies. After all, Americans of eighties of 20th century were far wiser than Obama’s Americans of today, did not allow him to re-enter the Oval Office for a second disastrous term !!

Carter’s entire Presidential tenure had been so dismal that he is often mentioned as “Weak / Lame-Duck” President right since Day One !! And Ronald Reagan did so well, carried forward by his successor George Bush that spill-over economic effects ensured two Presidential terms to Bill Clinton in spite of his philandering and numerous scandals. Prime Minister Morarji Desai was smart enough to squeeze him to deliver Uranium fuel for Tarapur Atomic Power Plant that posed a grave crisis of sorts in those days. Like Obama’s Mitchell, Jimmy Carter has Rosalyn as his shadow and vigorously lobbied for Nobel Peace Prize years after as ex-President. And he succeeded in hustling the Nobel Committee into awarding him the honour which he probably did not deserve at all. ‘Cosmic Circle of Absurdities’ had been complete, from ‘Nobel Peace Prize For Nothing’ to ‘Nobel Peace Prize In Anticipation’ !!!

Richest 1% Americans cornered 18% of the national income in 2009 which went upto 22.5% in 2012. And the share of wealth for the lowest 90% shrunk to less than 25% in 2013 while rose to 75% for the top 10% of American population. An American CEO drew 300 times of worker’s average wage which augmented to 335 times of worker’s wage of 2015 !! Employment grew but the gap between haves and have-nots widened menacingly. American economy had been steadily on decline during Obama’s Presidential Years as it was transformed into ‘Uncle Sam’s Inn’ free of all charges !!

Race relations worsened during Obama era so much so that it gave rise to ‘Black Lives Matter Movement’ across America. White cops were trigger-happy on Blacks, so ironically under the tenure of the first African-American President elected and installed with so much fanfare and widely expanding expectations. Finally, highly divided America rejected his sham of racial reconciliation by electing Donald Trump.

His anti-terrorism policy was weird and absurd to say the least. While he killed Osama bin Laden (only because Osama had conspired to kill Americans on American soil !!) in his Islamabad Cantonment hide-out, he provided US $ in billions without any rigorous audit to a terrorist country on our western borders. Instead of strangulating the terrorist country to asphyxiate them to death, he provided them sophisticated arms and ammunition which promoted the death-cult. He had a secret soft corner hidden away in his heart for Islamism symbolised by his middle name, so goes the general impression about him all over the world.

As his Obamacare grew in number of subscribers, it grew progressively expensive defeating the very basic premise of cheap / affordable health-care for all Americans.

Obama invested heavily in global clean energy which President Trump declared a hoax !! Could Obama have handled the issue more deftly instead of blindly investing so much in it ?

In 2012, Obama allowed 7,00,000 undocumented immigrants to enter into the USA. The number in 2017 is almost 11 millions !! Such a grave security threat that too, invited officially, cannot be a source of pride for any President in any country, anywhere in the world.

US Russian ties have hit a new low in spite of no Cold War. Both have been honey-mooning with sanction’s galore, growling and snarling at each other with Russians purportedly having hacked into Presidential Elections 2016, probably in a desperate bid to see a right-thinking man in the seat of power at the White House.

America lost their old-time friend and staunchest ally in Israel when he condemned Israeli settlements through a UN resolution. He provoked and angered Israel to no limits while went on to build bridges with an inconsequential country in their neighbourhood, Cuba.

Obama came a cropper on the issue of Chinese muscular high-handedness in South China Sea, a replica of Russians in Afghanistan during Carter years. In fact, he sat down to watch the scenario blandly.

The way Syrian crisis had been botched up by him with his characteristic dim-wit / directionlessness, less said the better. Since blood in the blood-bath is not American, Obama did not mind playing with so many West Asian human lives.

And his “Yes, We Can” inspired one of the Chief Ministers in this country who went on to become a highly successful Prime Minister and a world statesman too. Barack Obama could not cosset and rear the baby he conceived himself !!

Dr. Walter Semkiw, a physician practising in San Francisco, claimed after extensive studies of psychic sessions and background research, Barack Obama is re-incarnation of Lyman Trumbull, an Illinois Democrat Senator and principal author of the Thirteenth Amendment ending slavery in the USA. He was a great orator himself and team member of the then President Abraham Lincoln, a lawyer who widely represented African-Americans. President Obama shares so many of his characteristics with Lyman Trumbull.

Last but not the least, Jimmy Carter and Barack Obama, both having been elected quite young, both being Democrats succeeded by assertive / hard-nosed Republicans, both may also be remembered as ‘Longest Serving Retired Presidents’ of America !!!!!!!!!!!!!!! I recall yet another Democrat, Elected Young President John Kennedy, remembered better for his flirtations and Cuba crisis, would have been another “Longest Serving Retired President” had he not been slain in Dallas with his glamourous shadow Jacqueline Kennedy by his side.

How is that Democrat Presidents are so (in)famous for their juvenile conduct, immaturity, outright stupidity or philandering ?