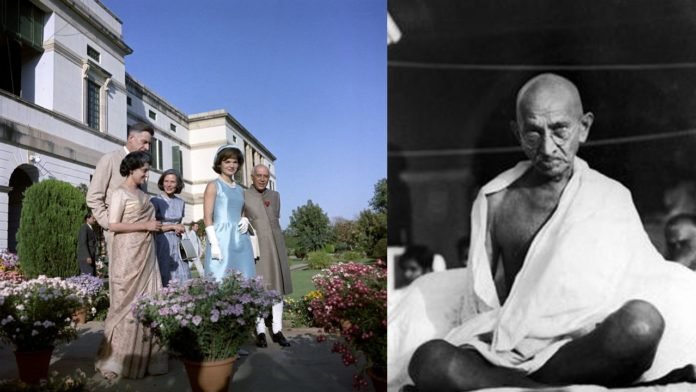 An interesting controversy has erupted in the form of Gandhi / Khadi / Modi / KVIC as Congressis have nothing better to do under the Holy leadership of Rahul Gandhi.

Gandhi could not liberate India from the vice like grip of British clutches of slavery. Netaji Bose had to intervene to strike the final, decisive blow to eject Goras from the country with his INA.

Gandhi did not liberate Bharata from India. In fact, he handed over Bharata to India represented by JL Nehru and his dynasty by bullying Sardar Patel to withdraw from the race to become PM in spite of massive support for the Sardar.

Gandhi did not threaten self-immolation to prevent partition. He should have done that to prove his greatness and commitment to the nation.

If someone tells me, Gandhi kept the Pot Of Freedom Movement boiling so that Netaji Bose could liberate the nation with his INA, I would pity his / her intellectual bankruptcy. Mangal Pandey, CS Azad, Bhagat Singh, Veer Savarkar, Chapekar Brothers, Udham Singh…were the real ones who kept the Pot boiling at enormous hardship and so many of them just burnt themselves alive in flames of freedom movement.

Today, at hindsight, I am unable to answer the question, why I should respect / idolise Gandhi and for what… for preaching Ahimsa to Hindus instead of calling them to lift Gandeeva to throw out Gora-Intruders coming from Britain… for promoting Hindustani instead of Samskrit.. for supporting Khilafat which turned out to be highly detrimental…

Prime Minister Modi has been working / struggling day and night to undo those historical wrongs at an enormous risk to his life and liberty. Magnitude of insults / abuses that he has taken / ignored, are even worse than being hanged till death. Yet, he has not complained at all so far other than deriving political advantage during elections.

I assert and re-assert with maximum emphasis at my command, Prime Minister Modi is a far greater freedom-fighter than Gandhi-Nehru.