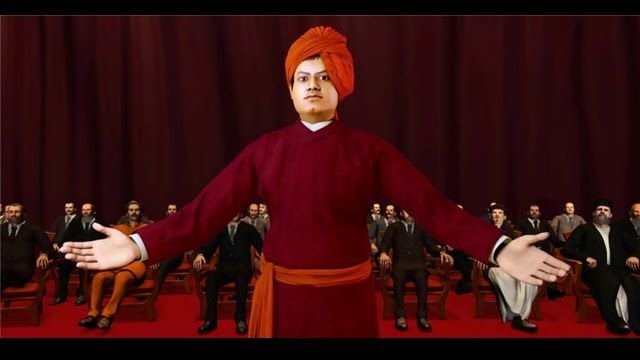 I recently completed reading of the volume on complete proceedings of THE WORLD PARLIAMENT OF RELIGIONS 1893 published by RK Mission, Kolikata. The Parliament was held at Chicago from Monday, Sept. 11 to Wednasday, Sept. 27, 1893 and was propositioned as the first such Parliament held in the world by Americans. That was not to be true. Most of us are aware of only the introductory oration of Swami Vivekananda  (hereafter SV) which was greeted by a burst of applause all over. Little are we aware of the sterling contributions that SV rendered to the entire Parliament till his last speech on the last day. I am taking the liberty of highlighting all those, point by point in addition to some other interesting happenings in my own way.

First Parliament on Religion was held long ago by Samrata Asoka. Organisers of the World Parliament Of Religions at Chicago were informed about it, much to their chagrin by SV .

SV had never been before such a large gathering, coming from all over the world. Though he was billed to speak during pre-lunch session as he was eloquently recommended by a senior Harvard University Professor of Philosophy, he kept on postponing it as he was jittery. It was only in the late evening session that he stood up to speak, only after being chided for wasting the opportunity by MA SARASWATI  who appeared before him, there.

Out of all the participants from all over the world, some 125 or so, SV was the only PARAM SIDDHA YOGI, who could move into NIRVIKALPA SAMADHI  effortlessly. All others were mere ritualistic practitioners or so-called scholars of various faiths. It was MA SARASWATI  who spoke through his Soul. Every word that he spoke in the Parliament, reverberated in every corner of the world. His exposition on Vedanta  on sixth day of the Parliament, is a marvellous piece of wisdom.

The entire exposition left everyone stunned into silence, simply unable to figure out what to say and how to react. Because, till then, the world had known this country only as a land of snake-charmers, scantily-clad paupers and now they suddenely discovered themselves mere PYGMIES before spiritual giants that Hindu-s are !! Organisers were so much astounded by his brilliance and eloquence that they rued their decision of accepting recommendation of that Harvard University Professor asking them to enrol SV as a delegate ! The Parliament was actually organised to establish superiority of Christianity over all other faiths. And there was a young man, not an old, white-haired Professor but a young man who simply demolished all other so-called ‘superiorities’ with effortless ease without even a blink !!

In addition to the renditions on Vedanta  and Hinduism, SV resolved several disputes / conflicting versions / contradictions among other faiths too.
He was always the star speaker to control bored audience whenever they doodled, to prevent them from retiring into their hotel rooms !!! American Press declared him the greatest orator at the Parliament. They expressed shame for having deputed so many missionaries to Bharata  to teach Indians, religion and spirituality.

SV explained to the world why Buddhism  died in Bharata  and flourished abroad owing to their self-destructive approach…that Buddhism  is yet another name of Brahmanism. Exposition was rendered by him at the request of the representative of Buddhism, Sri Dharmapala  who probably was not confident of dealing with the subject in all it’s perspectives properly. Dharmapala  is buried at Sarnath, near Varanasi with a cenotaph mentioning his presence at Chicago alongwith SV.

Secretary of the Parliament, Rev. Jenkin Lloyd Jones wanted next Parliament to be held on the banks of Ganga  in Benares to visit Hindu-Nobles right in their HQs after leaving their excessive baggage behind in their countries !! And nominated John Henry Barrows as the President of that proposed Parliament. So much impressed, rather astonished were they with SV.

Majority of the orations were on Christianity / Churchianity.

American admirers of SV arranged funds for JN Tata’s steel plant at Jamshedpur to the tune of Rs. 30 Lacs out of the total fund required i.e. Rs. 75 Lacs. And also permission to go ahead as British rulers were opposing the project till then. It was all orchestrated by his disciple, Sister Nivedita  invoking her British connections.

The Parliament not only made SV world famous but also attracted attention of the world towards ideals of Hinduism. It attracted lot of missionaries too, who had been ignorant about all that hitherto. Momentum of coercive / induced conversions gained weight thereafter. Other delegates from India viz. Mrs. Sorabjee and Mr. Dharmapala  attended a seminar on the sidelines on how to accelerate conversions in Bharata  !! They offered some valuable suggestions too, to American missionaries. It appears not only Buddhists  but also Parsi-s had been hostile towards Hinduism  since long.
Representatives of Jain sect did not mention their links with their Mother-Dharma  of Hinduism  at all. They pontificated the august audience as if Jainism was dropped on the benign land of Bharatvarsa  straight from some other galaxy / milky way / solar system !! Quite incidentally, on the land of Bharatvarsa !!

Once Swami Vivekananda was wandering around in Chicago as a great wanderer he was ! He spotted a library, trooped into the library, walked down to the librarian while examining the entire ambiance as well as readers with great intent, asked, “Do you have Srimadbhagvad Gita  in your library ?”. “Yes. It is lying over there, at the bottom of the pile of books as nobody ever asked for it. Since you are the first reader to demand that book, I shall pull it out for you”, replied the librarian. “No, no. Don’t do that” responded SV.

The librarian looked amazed. SV went on,”Gita is the foundation of entire wisdom of those books piled upon. If you pull that out, entire wisdom shall collapse like a pack of cards. Let it remain there.” Smiled the Swami and walked away.

SV was in contact with his Guru, Swami Ramakrsna  just for five years i.e. 1881 to 1886. Even this five year long association was so intense that he could achieve even the unachievable till then.

Swami Vivekananda  made a solemn declaration – FUTURE OF THE COUNTRY WOULD BE SO BRIGHT THAT EVEN ANCIENT ACHIEVEMENTS SHALL APPEAR TO BE PALE. His words of inspiration dissolved the diffidence caused by colonial rule, creating an atmosphere of self-respect and self-confidence.

THAT WAS THE GREATEST HERO OF CONTEMPORARY INDIA – SWAMI VIVEKANANDA.