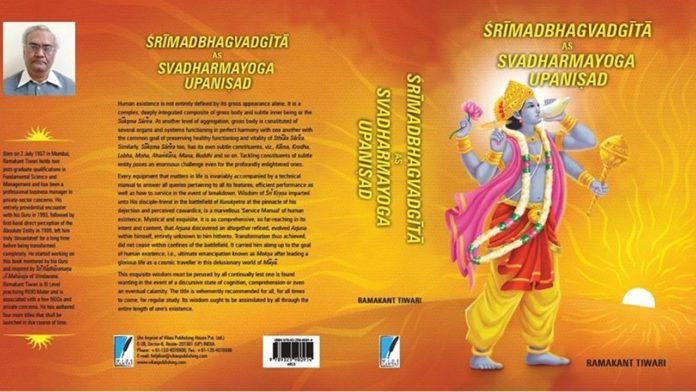 Hereinasunder, is stated exposition of Sloka  number II 2 / 22 II as a measure of illustration.

Just as human body is encased in clothes, Jivatma  is encased in gross body. It is a mystical and enlightening analogy drawn by the Supreme Exponent to illustrate a profoundly mystical cosmic reality pertaining to a particular manifest of the Supreme Reality.

Clothes may be changed and are necessarily changed. So is the gross body by Jivatma. Gross bodies of all creatures are merely various permutations and combinations of five elements i.e. Akasa, Vayu, Agni, Jala  and Prthvi, collectively known as Pancabhutatattva.

So are the clothes woven out of a small number of specified fibres in various combinations. If clothes are worn out, they are discarded and new ones are put on, stitched to prescribed specifications. So is the gross body. When it decays owing to old age, a new one is taken up by Jivatma, customized to the aggregate of Samskara-s carried by its subtle body.

Just as different clothes come and goon our gross bodies, it is different bodies that appear and disappear on the subtle being of Jivatma. Even if new clothes are accidentally or otherwise mutilated, they are necessarily changed. Gross body too, if ravaged by disease or accident, is discarded in the form of premature demise and a new one taken-up by Jivatma.

Clothes may acquire aberrations in the form of indeliable stains or tatters, yet may not be discarded altogether. Similarly body too, may acquire partial disablement, yet it is not immediately cast off by Jivatma. Clothes are not required for a dead body under disintegration into five basic elements. Jivatma  too, does not acquire body, once it attains perfection and ultimate deliverance. Gross body continues changing clothes throughout its unreal existence till death. Inner Soul too, keeps changing its gross bodies, till is it attained to ultimate liberation.

Gross body continues changing colour and design of clothes guided by factors of age, newer preferences, economic strata and fashion in vogue. Jivatma  too, selects bodies guided by its past Karma-s, Samskara-s of yet unredeemed desires on the astral body and perceptions weighing uppermost on the horizon of its mind moments before previous demise.

This desire clouding the mind during moments of demise takes precedence over all other actions performed and desires unredeemed, in deciding nature of the forthcoming body and family to be adopted by Jivatma  under impending incarnation. Subsequently, past Karma-s which have matured to deliver proceeds, move on to redeem themselves. Just as we love our clothes, Jivatma  in its subtle body too, has affinity for its gross body. Hence, it is essential to cremate body after its demise only to facilitate augmented freedom to Jivatma  to transmigrate to other worlds at the earliest.

Human existence is not just gross body. It is a complex integrate of subtle and gross bodies. It’s functioning too, is highly precise, infinitely well-organised with a certain objective. Subtle body is the core of human existence that governs gross body too. Just as every complex machine / equipment requires a Service Manual to operate and maintain properly, subtle human body too, requires a Service Manual. Operating with and managing constituents of subtle body viz. Kama, Krodha, Lobha, Moha, Ahamkara  etc. is abundantly tricky demanding wisdom / foresightedness of the highest order.

Srimadbhagvadgita  As Svadharmayoga Upanisad  is an exposition in the right direction with the aforesaid objective in focus. One shall not remain the same after perusing the volume comprehensively and assimilating its contents completely.

It may be ordered at –