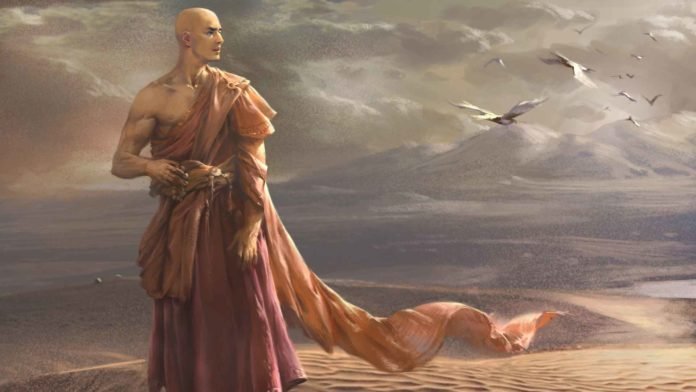 It was more than a millennium ago, Bharata  exported Buddhism to China via Silk Route without even custom’s clearance !! And the cultural renaissance it brought about after Buddhism being lapped up so adoringly that it created a unique history of sorts.

Two natural land routes into China for Buddhists during Han Empire (206 BC – 220 AD) were through Xinjiang i.e. Silk Route and the other through Yunnan, known as Chama Road.

In 68 AD, the then Han Emperor had a dream of a golden figure and he immediately deputed Cai Yin to Bharata  to learn more about Buddhism.

He returned with Buddhist scriptures and two Buddhist monks. Yuezhi now had a religion in which Buddha  was a pantheon and Mahayana  Buddhism started that way. Buddha  in the form of large human statues like Greek deities, existed all over Central Asia, Xinjiang and China. Buddhism became popular and Buddhist temples were constructed in large numbers.

Bingling Grottoes in Gansu is a sprawling ancient Buddhist temple complex with an array of statues and frescoes dating Ming Dynasty. Early statues have typical Bharatiya  gestures and poses of hands and feet.

Today China has largest number of Buddhist treasure, monasteries, temples and caves in the world, all facilitated via Silk Route alone though not a comfortable assignation indeed. Even today, the route has no facilities to brag about and it is an arduous venture to travel down the path as narrated earlier by Hiuen Tsang in his travelogue. Buddhist Masters were adamant in travelling to China carrying loads of books on Samskrita  scriptures irrespective of the grave dangers of perishing due to starvation, thirst, being lost or even attacked by wild animals.

They were always welcomed by Chinese monarchs warmly and the knowledge imparted by them received so adoringly. Their Vartalapa Pustika  i.e. book of conversation invariably carried questions like, “Where are you from, how are you, what Samskrita  scriptures have you brought with you and have you met the emperor” etc.

One of the most prominent cultural emissaries and Buddhist scholars was Kumarajiva  who journeyed to China some 1600 years ago to whet their appetite for wisdom. Kumarajiva  had a family history of erudition like his father Kumarayana, a Kashmiri Brahmana  turned Buddhist monk who had also travelled to China along Silk Route to disseminate Buddhist wisdom. His mother Jiva  was a princess of Kucha  Kingdom that lay en route.

He was born in 334 CE in Kucha Kingdom, now Kuqa in China and died in the year 413 CE in Chang’an, also in China. As a child prodigy, Kumarajiva  studied Buddhist scriptures of Mahayana  tradition and Veda-s inspired by his mother, by now a  Buddhist nun. He was also fluent in Samskrita  and Chinese. When he was instructed by his Guru  to travel to China to disseminate the enormous wisdom gained, he was prevented by the King of Kucha  as the King abhorred the idea of  losing a scholar of his level of erudition !! That was a unique instance wherein brain-drain was prevented by the King !!

As Chinese invitations were not allowed to be accepted by him by his King, Chinese Monarch deputed an Army of 70,000 soldiers to capture Kumarajiva  and escort him to China with great respect and honour. There he was honoured with the position of Royal Guru. Beautiful monasteries were constructed to enable him live there comfortably, teach and preach Buddhist philosophy to students from all over the Chinese Kingdom. He also supervised translation of Samskrita  texts and scriptures into Chinese.

Since Kumarajiva  was a poet himself, he translated some 54 scriptures poetically, very unique way of translating scriptures including Lotus Sutra, Sukhvati Vyuha Sutra, Diamond Sutra, Amitabha Sutra, Mulamadhyamakakarika, Astasahasrika Prajnaparamita Sutra, Mahaprajnaparamita Upadesa, Pancavimsatisahasrika Prajnaparamita Sutra  and Vimalakirtinirdesa Sutra  being the prominent ones. His main disciples were Daosheng, Sengzhao, Daorong  and Sengui. Kumarajiva  revolutionized Chinese Buddhism through use of Daoist and Confucian terms i.e. concept-matching. His diction was distinctive gifted with smoothness that reflected his emphasis on conveying interpretation instead of precise literal renderings. Thus, seminal Mahayana  texts have been more popular than precise translations.

His influence reached even Japanese shores that led to constitution of Soka Gakkai  and Pureland  sects of Buddhism. Japanese Prince Shotoku Taishi was so enamoured of Kumarajiva  that he formulated Constitution of his Kingdom based on Buddhist wisdom like Bahujana Hitaya, Bahujana Sukhaya  and Pancasila. Today Japan boasts of 65,000 Buddhist temples rooted in Kumarajiva’s teachings. So, quest for Sanatana / Buddhist wisdom was so pronounced in China that once they invaded Champa in Vietnam only to capture 1,300 Samskrita  scriptures !! Great wall of China has ‘Supreme Victory’ inscribed in Samskrita  even today.

The trend gradually reversed, turned vicious after Communist takeover of China in forties.