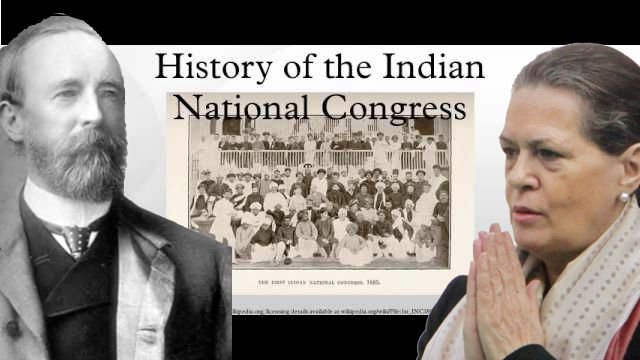 Congress was founded in December 1885 by British imperialist Alec O Hume with the help of 72 English-educated Brown Sahibs. Most Brown Sahibs who came forward to join the party believed in the British sense of (in)justice and wanted British Crown to rule over Bharata.

Retired British civil servant AO Hume, who successfully took the initiative, had convinced the then Governor-General, Viceroy of Bharata  and the Secretary of State for Bharata  that formation of a political party here was required to avert revolt against the Crown which would be far more dangerous than the first war of independence British had witnessed in 1857.

It may appear preposterous, but it is a fact that as late as 1905 / 1906, many top-ranking Congress leaders used to say, and said it openly and brazenly, that if the Crown really wished to end unrest in Bharata  or neutralise influence of freedom fighters, it had no other option but to accommodate the “educated Indians” in the British scheme of things.

In his Budget speech in March 1906, Gopal Krishna Gokhale said: “There is but one way in which this conciliation can be secured and that is by associating these classes more and more with the Government of their own country”. And we believed all these years Gokhale was a patriotic nationalist !

In December 1905, Gokhale, political Guru  of MK GANDHI and President of Benaras Session of the Indian (Anti-)National Congress, had inter alia, said, “For better, for worse, our destinies are now linked with those of England and Congress freely recognises that whatever advance we (read Congress leaders) seek must be within the Empire”. Talking like Dalai Lama indeed !!

Remember, it was not only part of his presidential address but the statement was delivered at a time when tempers were running high across the country in wake of communal partition of Bengal in 1905. Swadeshi Movement in partitioned Bengal was also in full swing.

Not that there were no outstanding nationalists in the Congress. There were leaders such as Sri Aurobindo Ghose, Bipin Chandra Pal and Bal Gangadhar Tilak. They wanted to give an Bharatiya  orientation to the Congress but couldn’t because those who controlled it rendered them ineffective within party.

Circumstances under which Netaji Bose had to quit Congress in 1939 after winning presidential election with overwhelming majority at Tripuri, then raised Forward Block, are too well-known.

Chief factor in Congress was the British Crown, which not only ruthlessly employed it’s policy of divide-and-rule to consolidate the Empire in Bharata  but also indoctrinated many Congress leaders who were more than willing to play games for the sake of personal power and profit. Congress and their power-hungry, unscrupulous, immoral, casteist and communal politicians who came out of it after 1947 continue to play the same devious games with people even today.

Then one day before independence, JL Nehru signed some 20 volume heavy TRANSFER OF POWER AGREEMENT 1947 with the then British Viceroy Mountbatten to perpetuate / continue with the same British system / laws / governance. Thus, he stabbed in the back of the then 33 crore Bharatiya-s which continues even today with 125 crore Indians.

PM Narendra Modi makes a valid point when he says that if Bharata  is to survive as one nation, regenerate it’s socio-economic and political life and attain a status in the comity of self-respecting nations, there is no alternative but for the people to liberate the country from the ‘TERMITE’ that Congress happens to be.

Congress is not really a party of Bharata. It is sacred duty of each and every Bharatiya  to see through the ulterior game-plan of secular fundamentalist outfits and work with single-minded devotion for a Congress-Mukta Bharata.

Congress is not an elixir of life. It is a toxic poison that the nation must get rid of.