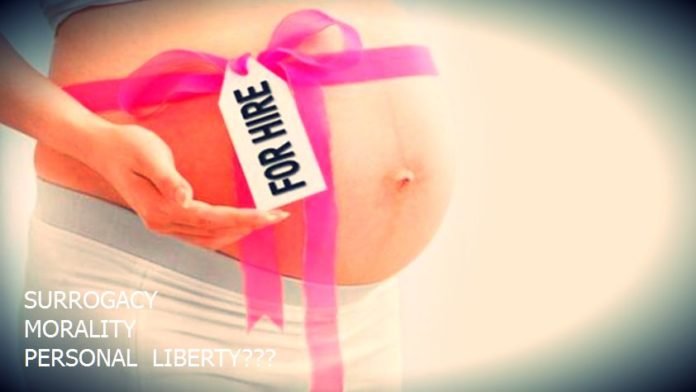 Surrogacy is a practice whereby a woman bears and delivers a baby meant to be delivered to another couple, issueless or otherwise.

That immediately allows rise of two forms of surrogacies, Altruistic and Commercial.

Altruistic surrogacy is based on pure altruistic considerations wherein no money transaction viz. expenses, fees, monetary incentive etc. is allowed except medical expenses and insurance coverage for the surrogate mother.

Surrogacy (Regulation) Bill 2016 cleared by the Union Government and expected to be tabled in Lok Sabha during forthcoming winter session of Parliament, stipulates compulsory registration of clinics engaged for the purpose, unexceptional ban on commercial surrogacy and records thereof to be maintained for at least 25 years.

The Bill also explicitly defines eligibility conditions for couples intending to avail of surrogacy service viz. restricted to Bharatiya  citizens only, must be married at least for 5 years, either or both clinically certified to be infertile, 23 to 50 years of age-group for women and 26 to 55 years of age-group for men, only close relative allowed to be surrogate mother, incidence of surrogacy restricted to one opportunity only, couple with no surviving child or having disabled child including fatal illness being eligible, also children born out of surrogacy not to be allowed to be abandoned under any condition or subjected to any form of exploitation whatsoever and doctors prohibited to carry out any procedure that may possibly hurt surrogate mother of the baby.

Proposed legal framework mandates equal rights in all respects for the surrogate child as with the biological one and rights of surrogate mother over her infant simplifying issues of parentage.

Violation of provisions shall attract imprisonment and penalty upto 10 years and 10 lakhs respectively. The Bill mandates constitution of surrogacy boards at national and state levels and district authorities participating in administration of the law, whenever enacted and notified. Time space of 10 months shall be allowed between Presidential assent of the Bill and notification thereof so as to allow surrogate mothers already pregnant to complete their related engagements with the matter.

Group of Ministers that scrutinized the draft bill prepared by the Law Commission was headed by Sushma Swaraj with JP Nadda, Nirmala Sitharaman and Harsimrat Kaur Badal as members. Bill is drafted in harmony with country’s cultural ethos purely on ethical considerations. Extent of malaise may be gauged from the fact that surrogacy has now turned a US$ 400 million a year industry with over 3000 Surrogacy Clinics all over the country.

It is realistic to call them ‘Surrogacy Clinics’ instead of Infertility Clinics with the kind of blatant commercialization of female body that they have nurtured for the lucre. Childless couples from all over the world are attracted to India for surrogacy because price of Indian woman’s body is dirt cheap given the poverty figures and lure of the lucre even among the well to do. Even celebrities flush with wealth and already blessed with one or two children, went ahead for surrogate child only because wife had declined to endure with third child-birth.

Under the new law, such couples as well as widows or divorcees would be allowed to go for adoption instead of surrogacy. It has also been decided that no more new Surrogacy Clinics in the name of Infertility Clinics would be allowed in the country. There is every likelihood that surrogacy business shall encounter slump in ‘sale of services’ once the law is passed and notified.

Necessity of the law was realized as exploitation of surrogate mothers has been on the rise, escalation of abandonment of surrogate children and well-heeled intermediaries laughing way to their bank accounts with import of human embryos and gametes. Womb trade for poor / innocent women has been a bane on rise and the psychological trauma they are left to contend with had to be curbed. According to World Bank report of 2013, drop in fertility had been steep and today, country has some 10% population suffering from infertility. With the rise in infertility, population of ‘Surrogacy-Infertility Sharks’ shall also rise exponentially and the urgency to regulate the entire scenario is real lest it turns dreadful.

Opposition to the bill has largely been subdued so far with stray voices emerging from lobbies of vested interests and secular pioneers with dubious intentions. There are lobbies demanding only regulation of the so-called industry instead of banning it altogether. They blame Government of adopting a patronizing attitude towards women instead of allowing them unmitigated freedom to chose when, how, to whom and how many times they rent out their wombs !! They fail to realise intentionally or otherwise, the same weird consideration may easily be stretched to justify rather accommodate full-body trade for satisfying carnal passions too, anywhere in an open market.

Allowing unrestricted access to foreigners as demanded by some lobbies to attract ‘Surrogacy-Infertility FDI’ in this sector would soon earn a dubious distinction of Bharata  being a ‘Surrogate country’ in the world. If slapped with the dubious honour, it may take centuries for the dishonor to be obliterated from history books and public consciousness. Proposed law perceives infertility as a human agony and provides for an amelioration in a humane manner within precincts of a normal and natural family ambience. The law ensures a surrogate child leads as much a normal life as possible that is available to a natural born biological child.

If some lobbies have decided to call it illegitimate interference with woman’s complete personal liberty over her body and soul, it may be argued that no fundamental right is absolute in nature and no fundamental right may be allowed to override overall interests and well-being of family, society and nation as unrestricted / unmitigated invocation of any fundamental right is bound to adversely affect all. There are some who argue, complete ban on commercial surrogacy is as preposterous in concept as prohibition and as absurd in practice as banning prostitution.

Well, naysayers and prophets of doom have always been in the forefront to extend ‘red-carpet welcome’ to every nascent move before the move is transformed into a legendary success for the posterity to reckon with. A well-intentioned law or decision cannot be stalled from enactment for the fear of some adverse consequences at the expense of good that it is bound to do to the majority in due course.

Medical fraternity has not been very enthused about the proposed law. Their main grouse appears to be based on exclusion of ‘same-sex couples’ and ‘single parent families’. They have not yet condescended to explain as to how ‘same-sex couples’ can be called ‘couples’ instead of house-partners / co-tenants or ‘single parent families’ as ‘families’ instead of individuals. They are yet to explain as to how such ‘couples’ and ‘families’ can ensure normal mental / psychological development of surrogate children. To some extent, it applies to adopted children too. Dr. Anant Bhan, known as a ‘medical ethicist’, charged Government of “making unacceptable value judgement in today’s age” as well as people with special needs “have some lower value of living”. Infertility specialist Dr. Nayna Patel declared bill “virtually spelt death to surrogacy because it takes away…and nation will miss out medical tourism”. If womb-trade is ethical to promote ‘medical tourism’, then offering children to western pedophiles to promote tourism in Goa should also be ethical thus, acceptable and welcomed !!

What sort of wisdom is this, afflicting the nation while pushing entire society towards decline and destruction for the sake of earning US $ ?? However, another infertility specialist Dr. Aniruddha Malpani candidly admits, surrogacy has been overused and misused far too often and regulation is overdue. They overlook the fact that principle of surrogacy stipulates, it is meant for those who really need that and not for promoting medical tourism or ‘transfer of labour pain’ to poor women with a certain price attached to that.

Constitutional historian Ivor Jennings once commented, “…rule of law is apt to be rather an unruly horse…”. Well, if rule of law is deftly blended with the prevailing pristine ethos of nation, there is a pragmatism of ‘unruly horse’ turning into a majestic elephant of an enlightened order !! While Abhishek Manu Singhvi and Anish Dayal believe, the bill “shall harken back to stone ages”, they are unaware of facts by design and intent that country belonged to a golden era of ‘Sone ki Chiria’ till 1750 followed by every order of decline, degradation all over and the Bill proposes to be one of the powerful instruments to exercise restraint over that. Bharatiya  womb is not for sale, Bharatiya  society can no more afford or sustain any kind of moral degradation.

Agony of a childless couple or childless individual (which they call single parent family !!) is a human issue and must be sorted out as humanely as possible instead of tagging it to a commercial venture. Their argument of the Bill being at a cross with dwindling Parsee community too, is fraught with frivolity. If commercial surrogacy is allowed for Parsee community, it is likely to witness augmentation of in-breeding, further deterioration and may be, eventual extinction.

Is it not prudent and pragmatic for them to diversify their genetic stock by adding more gene-pool from other communities ? They declare, by what method one chooses to be a parent, naturally or through surrogacy, is none of the State’s prerogatives. It is certainly State’s prerogative as it deeply affects so many aspects of the State, society, community and family, all intertwined. State has been paying a heavy price for the unmitigated, unregulated freedom which is aptly described by the term “Free for all” during seven decades after independence and now it is the historic moment to call enough is enough.

US comedian Elayne Boosler says, “The Vatican is against surrogate mothers. Good thing they didn’t have that rule when Jesus was born.” We do not know how serious the comedian was or whether Jesus would have wholeheartedly supported the move concerning human amelioration given his Biblical track-record of pardoning every ‘sinner’ without going into past, present and future of the sinner-seeker.

In absence of these vital details, we are lulled to assume, even Jesus would have agreed to the cause of altruistic surrogacy as those who propound philosophical faiths, have been having a heart much bigger than their so-called trustees and followers .