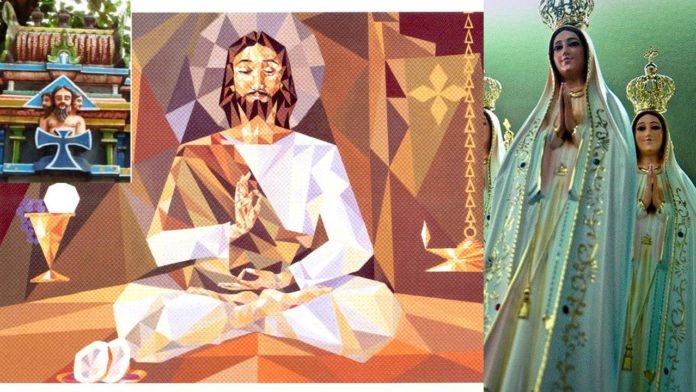 34th GENERAL CONGREGATION OF JESUITS AT VATICAN IN 1995 declared categorically,

“INCULTURATION IS ONE OF THE FUNDAMENTAL ASPECTS OF THE CHURCH’S EVANGELISATION MISSION.”

And embarked upon a massive exercise of inculturation (NOT HINDUISATION !) of their faith or otherwise, to be more acceptable to the inhabitants of nation.

DESI LORD (?) JESUS now sits in the posture of PADMASANA on top of a BLOOMING LOTUS !!!

Weddings are being solemnised in churches with exchange of garlands, putting vermilion on Christian bride’s top head-front… then followed by seven ‘PHERA-S’ !!!

Arati is conducted in Churches with blowing of Sankha ( Conchshell ) !!!

Murals are being prepared / installed based on Hindu ethos !!!

Sacred Heart Church in Burdwan has two huge murals displaying Virgin Mary in green sari, DESI LORD (?) JESUS in a palanquin with all other characters in Hindu attire. Similarly all Biblical characters on glass windows have been Hinduised, for the first time since 1870. Visitors squat on floor when the ‘HOLY’ (?) FATHER performs Arti with an oil lamp. On Christmas day, the CHURCH CONDUCTS YAJNA IN THE PREMISES !!

Sacred Heart Church in Bholath, near Jalandhar in Panjab looks like Gurudwara with a huge dome. Church choir uses harmonica and tabla. CAROLS AND HYMNS ARE RECITED LIKE SABADA. Kirtana is also held regularly for the DESI LORD (?) JESUS !! WHERE ARE THE SWORD-WIELDING SIKH-S / NIHANGA-S ??? ARE THEY OUT ON A LONG LTC LEAVE ??

Our Lady Of Good Health Church in Masihgarh, Delhi has a MARY RELAXING INSIDE A SANKHA !!!

A mural at a Papal Seminary depicts DESI LORD (?) JESUS IN SAFFRON ROBES with a PIPALA LEAF IN THE BACKGROUND !! ‘Swami’ Kriyananda is an American donning saffron robes, has an Asrama in Gurgaon.

In a Chapel at Trichy, DESI LORD (?) JESUS regularly performs YOGA… albeit only in murals !!!

St. Thomas holds ‘KAMANDALA’ full of ‘GANGAJALA’ in a Church at WARDHA !!!

In a Murugani Church in Jharkhand, DESI LORD (?) JESUS is a tribal… in tribal attire, looks like MADE OF WOOD (those tribals construct their deities of wood only) though it is FIBREGLASS !!

Murals under preparation are all the more imaginative…DESI LORD (?) JESUS and his disciples squatting on floor wearing DHOTI-S…having ‘ROTI – SABZI’ as ‘THE LAST SUPPER ‘ !!!!

Irony of the mega-jamboree is that it is being orchestrated by a Bengali Hindu Brahmana, Subrata Ganguly of Lokanath Enterprises, Kolikata !! He is an ardent devotee of Baba Lokanath, 18th century Bengali Hindu saint. He is well-versed in Bible and started this exercise of inculturation in 1990s on behalf of Christianity.

Sanghi-s and Bajarangi-s shall be perfectly justified in storming these ‘SINNER’S JOINTS’, instal Hindu deities and proclaim them as ancient temples. Why pretensions ?? If DESI LORD (?) JESUS has become a Hindu, then why should he not make way for Hindu deities instead of being the centre of worship himself !!!

HOW LONG THIS ANTI-NATIONAL THEATRE OF ABSURDITIES SHALL BE ALLOWED TO CONTINUE ??