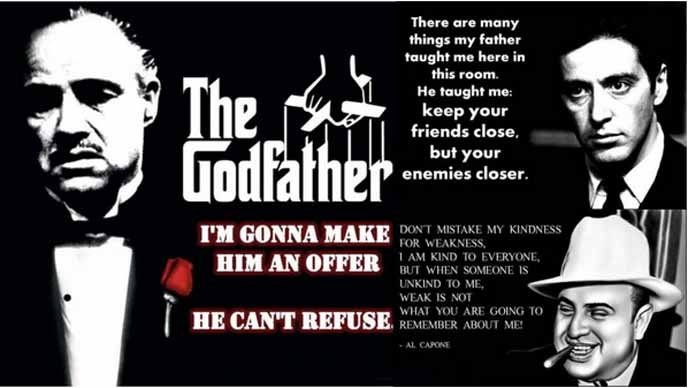 Rare would be the person who has not at least heard about The Godfather. A favorite of millions, many learn a lot of life lessons from it.

The MD of a company I worked for was so devoted to this book that when it was first telecast on HBO (I think), he had actually issued a circular that all should watch it…. The joke that followed was thankfully he was not conducting a test on the day after…

Actually it’s a different point I wish to talk about. The novel begins with the wedding of his daughter when a man comes to request a favor that he cannot refuse on this day as one Italian to another, – Amerigo Bonasera, a funeral parlor owner.

Bonasera wants justice – bloody revenge really – for the violent assault and near rape of his daughter. He is not able to get satisfaction from the law, and has therefore approached the Godfather.

To cut to the point, the Godfather agrees and also stipulates that he too may need Bonasera’s help in the future. Bonasera agrees, his job is done, it’s a long story that you can read here if you don’t know it already. http://godfather.wikia.com/wiki/Amerigo_Bonasera

The very same Amerigo Bonasera had earlier maintained a snooty distance from the Godfather as he knows that beneath the veneer of sophistication, the Don is still a man whose business is crime. Bonasera is a white collared professional who earns well, believes that they belong to different worlds and life cannot ever change course to bring them together.

One more, similar story. Heard of Pastor Niemoller? No? OK, but you must have come across his famous poem #First_they_came_for the Socialists, and I did not speak out— Because I was not a Socialist…….. and the Nazis kept coming and picked up others too, with the same result, till …. Then they came for me—and there was no one left to speak for me.

One sees a lot of Amerigo Bonaseras among #Hindus today; people who are educated, successful professionals. I do not wish to say that you will have to go to some Don, but if you read the news, surely you must be thinking that you are not so insulated that nothing can happen to you or those you love beyond yourself.

The least one can do is to awake, arise and yes, unite. Do read Pastor Niemoller’s poem once again, if this point does not make sense to you. Or more than once, if need be?

#Buddha has the last word – Sangham sharanam gacchami ! Surely, he did not say it in jest?

N.B. : If you know any Amerigo Bonasera, do share this post with him / them so they do not go the path of Niemoller… at least make sure your entire family votes on the voting day.