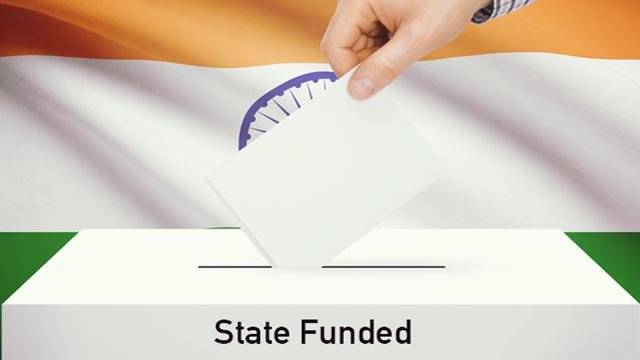 Entire floating and non-floating currency to the extent of 86% in terms of value was demonetized on the night of Nov. 8, 2016 in a historic exercise to excise untaxed black money from nation’s economy.

Probably it was first such exercise in the world on such a gigantic scale. Opposition from political parties barring a few, has been fiercely hostile. With UP and Panjab Assembly elections few weeks away, with entire cash stash meant for state elections trashed in a moment, nightmare being experienced by parties is not only understandable but also expected.

Hiding behind sufferings of common men, farmers, daily wagers etc., these parties have stalled Parliament and have the audacity to declare Bharata Banda.

Economic tremors and loss of piles of cash meant for elections by political parties has revived the old issue of state funding of elections. If the right mechanism of state funding of elections had already been there, probably these parties would not have collected so much cash, tempers and attrition levels would not have been so high, probably Parliament would have been functioning smoothly thereafter and plethora of pending Bills awaiting Parliamentary approval would have been cleared without so much loss of time and tax-payer’s money.

State funding of elections is a system wherein Government provides funds to political parties and candidates through their respective parties unless contesting independently, to bear electoral expenses accompanied by strict accounting norms and transparent reporting.

Objective of state funding of elections is to protect political parties and their candidates from being compelled to accept donations from lobbies with vested interests and their subsequent manipulative arm-twisting to serve their coffers.

State funding may also be resorted to buy political parties for non-electoral activities too, in consultations with Government. Direct and indirect state fundings are the two ways to enforce the mechanism.

Almost every country in the world allows indirect state funding of elections while direct, only select few. In Bharata, indirect measures provided happen to be free air time on national / regional channels, some benefits like security, office, utilities etc. Section 13A of IT Act allows exemption from income tax on political parties registered with the Election Commission.

With respect to direct state funding, discussions have been going on, Election Commission appears to concur with the concept albeit no concrete outcome has been in sight so far.

First factor that emerges once state funding of elections is accepted, is that of eligibility as to who all are entitled to receive state funds to finance elections.

Most common eligibility condition is share of votes polled in previous elections. In some cases, number of seats in legislative bodies may also be invoked as a criterion but it is not generally preferred as number of frivolous candidates contesting polls may increase.

It is not that there has never been any serious effort in past to evaluate the idea in totality. Several Commissions and Committees were constituted viz. Indrajit Gupta Committee on State Funding of Elections (1998), Law Commission Report on Reform of Electoral Laws (1999), National Commission to Review Working of the Constitution (2001) and Second Administrative Reforms Commission (2008).

In all these reports, arguments in favour of and against state funding of elections have been carefully assessed. As a measure of educational exercise, these arguments are being summarized to have a better perspective of the knotty issue.

Opponents of state funding cite incidence of increasing distance between politicians and electorate as politicians do not have to solicit funds from them, party in power enjoys undue advantage as compared to new parties / candidates, taxpayers are compelled to pay to support party / candidate who they may never vote to support, public funds meant for social welfare are diverted to politicians and parties tend to become State organs at the expense of their political independence.

Arguments in favour of state funding of elections range from being a worldwide practice, state funding being an unavoidable / essential cost of sustaining democracy through campaigns / regular contacts with their constituents etc., curbs corruption and vested interests, inner-party democracy through internal elections can be ensured, minimum number of women candidates can be ensured, financial transparency can be enforced, eradicates political inequality and campaigns are becoming increasingly expensive.

State funding of elections are very much in vogue in large number of countries. Out of 6 English speaking countries viz. Canada, USA, UK, Ireland, Australia and New Zealand, all provide direct public funding of elections. Australia, Canada, New Zealand, USA provide for electioneering; Canada, Ireland and New Zealand for party operations; specific subsidies for Opposition Leader in UK and nomination conventions in USA; tax benefits by Australia and Canada; subsidized access to media by all these countries are already in vogue based on minimum number of votes.

Maximum funding is available to four parties in Canada to the extent of 70% and minimum in USA i.e. mere 0.6%. With state funding lowest in USA, maximum time of senators and representatives is devoted to the task of fund-raising leading to large number of lobbies vying for state favours tormenting governance itself. For instance, American gun lobby is so powerful that they do not allow ban or severe restrictions on private gun-ownership in spite of frequent cases of shoot-outs and killings.

Similarly, powerful arms manufacturers forced President Bush to invade Iraq in search of Weapons of Mass Destruction / Chemical Weapons that they failed to even locate.

88% Latin American countries provide public funding out of which 78% in the form of subsidized media access.

69% African countries provide the facility based on minimum share of votes.

21 out of 24 northern, western and southern European countries provide free or subsidized media access and tax benefits except Liechtenstein.

It is obvious, state funding of elections is a serious issue prevalent in majority of countries and Bharata must initiate appropriate actions to implement in the country. In an ideal scenario, both forms of state funding are practiced with auditing / regulations and complete transparency enforced.