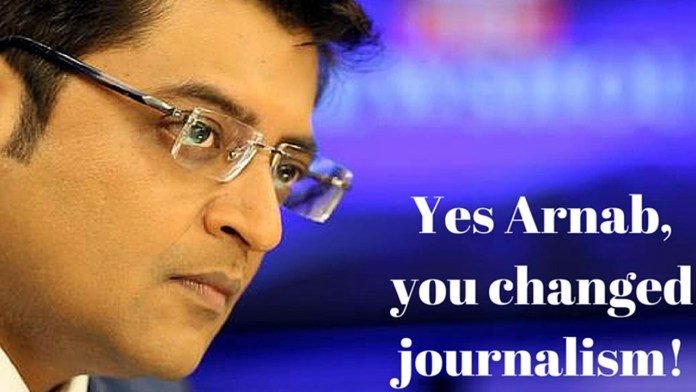 Arnab Goswami can be arrogant, ill-mannered, uncultured and even not well read, he can be a megalomaniac driven by pre-conceived, simplified notions, and yet, today there is no important journalist in India than him.

The work he has been doing is monumental, phenomenal. He is taking on the evil nexus of liberals, seculars, communists on such a large scale of influence, unleashing such an enraged public discourse and in process exposing them in such a way that it is no less than a service. His is the aesthetics of cacophony.

It’s only nice to see those living-in-a-bubble-liberals getting humiliated on his shows on daily basis, in full public view, for all to see. That’s tit for tat to them.

This is the only language they understand. This is what they themselves have been doing over the period of time.

They created a hoax of ideology, Arnab is attacking them with a hoax of no-idelology, but the scale is enormous. Nation glues to Times Now in primetime as Arnab tears into those filthy, pseudo, pro-terrorism liberals.

Finally a mainstream English language journalist with such a large influence who is not the part of the gang.

Public discourse is the new weapon of mass destruction. Debating furiously and exposing hypocrisies in full public view is the new order of the day.

Another five six more influential journalists like Arnab and hopefully we shall get our public discourse free from the clutches of communists.

Remember, what Arnab is doing is not the most appropriate form of discourse, but it is only appropriate to take on these communists. Once the “ethnic cleansing” is done by marginalising and nullifying them, we shall move on and instead of Arnab will look for a more literate, well mannered, democratically inclusive journalist.

But as of now, we need him. What he is doing is no less than national service.