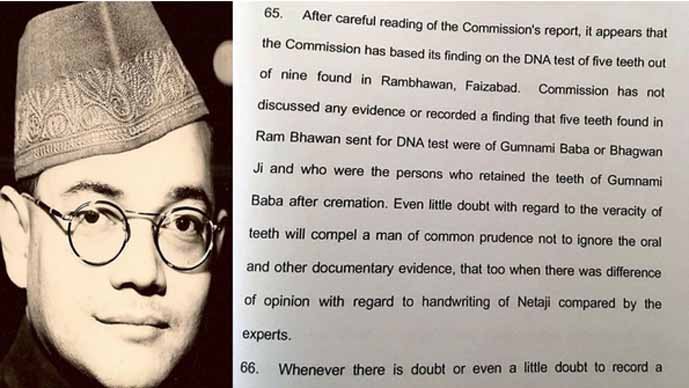 17 members of Netaji’s family have written a letter to Sahai Commission (photo attached) questioning its Inquiry. This is very strange because the terms of the commission are limited to identifying who ‘Gumnami Baba’ was.

There is no reference to Netaji. Then why are such senior members of Netaji family so agitated and riled up? Why don’t they come and depose on record before the commission?? Aisi kya majboori hai ki khat likhna zaroori hai???

Even more tellingly, these members haven’t even bothered to read the Hon’ble High Court’s judgment in ‘Gumnami Baba’ case, on orders of which the commission was set up!

If they had read it, they would know that the High Court in its wisdom had ALREADY REJECTED their argument based on JMCI’s negative report of teeth DNA. (see pics of para 65-66 of judgment attached with this post)

Their 2nd argument is that Netaji’s family photos etc were all sent to Baba by Shri Bijoy nag etc. Again, everyone concerned with the case ALREADY KNOWS this!

Has anyone ever claimed that Baba brought these trunks full of Netaji-related material with him when he returned to India??

NO! The real question is WHY he was collecting this material and WHY were such eminent Netaji associates like Leela Roy and Dr. PM Ray dutifully providing it all to him??

Finally, the white-bearded photoshopped image has NEVER been claimed by anyone to be an actual photograph of Gumnami Baba. If the family members of Netaji have a problem with its use, they should write to Media and protest.

What is the point of protesting about it to the Commission???