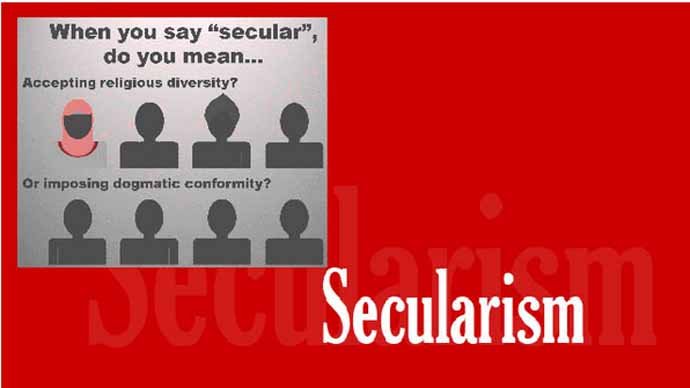 HOW SECULARISM CAME INTO EXISTENCE ?

It was some 300 years ago, ‘The Great (now pigmified !!) Britain’ suffered from sinister onslaughts of unscrupulous politicians. They indulged in loot, corruption and plunder the way we are witnessing in our country today.

British clergy declared ‘ENOUGH IS ENOUGH’ and they decided to intervene directly. With the sole intention of dodging direct intervention from the British clergy, two British politicians Charles Bradlaugh and George Jacob Holyoake floated the malevolent doctrine of ‘Secularism’ in mid-19th century.

What they meant by Secularism and explained to the baffled clergy was about complete non-interference by the Church so as to enable them continue with their looting-spree and equal status of all religions in the eyes of state. In support of their doctrine, they floated lofty arguments of non-interference by the Church, created several groups and lobbies to battle out the clergy. To a great extent, they succeeded.

WHY WAS IT INTRODUCED IN BHARATA ??

Same ideology was transplanted by JL Nehru of Congress in the country with the sole intention of destroying Hinduism  through regressive discrimination, vote-bank politics, pandering Muslims / Christians and divide & rule.

These secularists of India want to ruin the entire populace by enforcing malevolent secular governance. There are several countries in the world who practised phoney secularism, are now facing severe crises of immorality and disorder. If you remove moral & ethics in the form of Dharma  from our entire upbringing and conduct, what is left behind ?  Only animal instincts !! What else ??

Prime Minister Indira Gandhi was the worst politician in the country who introduced secularism as a fundamental feature in the Preamble of the Constitution though she was not empowered to do so. Now a large section of our population are suffering from the serious malaise of secularism and moral depravity.

Secularism may be an antidote to propagation of a cult that may be obnoxious to the stability and sovereignty of the nation. For instance, Marxism / official favours to Christian / Muslims could have been prevented by raising the wall of secularism. Secularism cannot be applied as an instrument to eradicate Dharma  as Dharma  happens to be the foundation of human existence. Unfortunately, the bogey of secularism has been applied selectively only to suppress / destroy Hinduism  and promote anti-national ideologies.

SCULARISM IS DIABOLICAL IN ORIGIN, SINISTER IN CONCEPT, MONSTROUS IN PRACTICE AND DEPRAVED IN INTENTION.

Following are the ill-effects of secularism –

DENIGRATION & DEROGATION OF HINDUISM  in their own country in every possible, conceivable manner.

FREE RUN TO JEHADI TERRORISM so much so that a strange creature known as HINDU  TERRORISM has been created by cross-breeding ANTI-HINDUISM  WITH ISLAMIC JEHADISM / ROMAN CATHOLIC EVENGELISM.

ENCOURAGING MUSLIMS / CHRISTIANS TO GRAB AS MUCH WEALTH / LAND FROM HINDU-S AS POSSIBLE. Government have legalised so many such outrageous moves by them.

MISUSE OF NATIONAL RESOURCES in the form of reservation for so-called ‘Dalita – Christians and Dalita – Muslims’, burgeoning Haj subsidy (strangely enough, it is not Kafir money !!), subsidised loans…sort of VIP citizens.

DEGENERATION OF HINDU  COMMUNITY by tampering with their education system. Present curriculum produces ANTI-NATIONALS who find everything wrong with Hindu-s and everything right with Muslims / Christians, demand every possible favour for these two communities, go ballistic when a Naxalite / Maoist is killed in an encounter but rush into their burrows like rabbits when innocents are slaughtered by them…

Secularists may attempt to refashion the IDIOTOLOGY OF SECULARISM as MULTI-CULTURALISM, then re-impose upon the nation with renewed vigour. Incidentally, British PM David Cameron had condemned Multi-Culturalism much to the annoyance and chagrin of a large army of secularists turned Multi-Culturalists all over.

Secularism is simply ‘DEPRAVED ANIMALISM’ to say the least, completely devoid of the faculty of DISCRIMINATIVE WISDOM, a privilege unique with the mankind.

COUNTRY MUST BE DECLARED A HINDU-RASTRA  IMMEDIATELY. It is now well established, non-Hindu  is safe and secured ONLY in a Hindu-Rastra. Example of Parsee community stands stark and loud. They were persecuted in Iran, came to Bharata, then a Hindu-Rastra, settled down forever and prospered like anything. Today, they are the wealthiest community in the country. There is NOT A SINGLE Islamic nation in the world that is peaceful, where Muslims are safe and prosperous. It is ONLY in Bharata  that they are not only safe but surviving very well thanks to the majority population of Hindu-s. Declaration of the country as a Hindu-Rastra  is in the interest of all.

HINDU-S MUST BE ORGANISED ON A MASSIVE SCALE TO COUNTER THE MENACE OF SECULARISM.

Let us hope, secularists and nationalists of the nation are listening to the post.